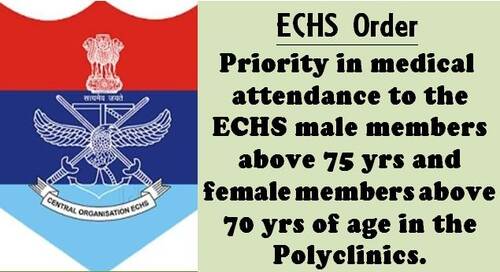 1. Ref the u/m letters of Central Org ECHS on the subject :-

4. In view of the aforementioned, above quoted letters are superseded. However, the elderly ECHS beneficiaries of undermentioned ages will continue to be given priority for medical attendance at Polyclinics including consultation, check up and issue of medicine as hitherto fore :-

5. For info and further dissemination please.

Loading...
Newer Post
WORKING HOURS : ECHS POLYCLINICS – No ECHS beneficiary will be denied treatment at Polyclinic even between 1500hr-1600hr.
Older Post
Nomination of Liaison Officer for SCs/STs in Zonal Railways/ Production Units at the level of JA Grade Officer : RBE No. 106/2020