New Delhi, the 16th May, 2017
No. 1-2/2016-IC.—Whereas, vide its Resolution No.1-2/2016-IC notified in the Gazette of India, dated the 25th July, 2016, the Government of India accepted the recommendations of the Seventh Central Pay Commission in respect of the categories of employees covered in the Terms of Reference contained in its earlier Resolution No.1/1/2013-E.III(A) dated the 28th February, 2014.
And, whereas, the Government has considered it necessary to make the following changes in the recommendations of the said Seventh Central Pay Commission in respect of the said categories of employees, namely:—
(1) The Defence Pay Matrix, (except Military Nursing Service (MNS)), which has 24 stages shall be extended to 40 stages similar to the Civil Pay Matrix;
(2) The Index of Rationalisation (IOR) of Level 12A and 13 of Defence Pay Matrix shall be enhanced from 2.57 to 2.67. The Defence Pay Matrix (except MNS) shall, accordingly, be revised;
(3) To rectify the factual errors appearing in Level 10B and Level-12 of the pay matrix of MNS and in view of the changes in the IOR in the Defence Pay Matrix, the first stage of corresponding Levels of Pay Matrix of MNS shall also change. Accordingly, the Pay Matrix (MNS) shall be revised;
(4) The IOR of Level-13 of Civil Pay Matrix shall also be enhanced from 2.57 to 2.67. Accordingly, the Civil Pay Matrix as contained in Annexure-1 mentioned in para 6 of the aforesaid Resolution dated the 25th July, 2016 shall be revised. The revised Civil Pay Matrix is at Appendix-1;
(5) The provision contained in para 13 of the aforesaid Resolution dated 25th July, 2016 shall be revised to the extent that the benefit of pay protection in the form of personal pay of officers posted on deputation under Central Staffing Scheme, as envisaged therein, shall be given effect from 1st January, 2016 instead of 25th July, 2016. Further, this benefit shall also be extended to officers from Services under Central Staffing Scheme, coming on deputation to Central Government, on posts not covered under Central Staffing Scheme.
ORDER
Ordered that this Resolution be published in the Gazette of India, Extraordinary.
Ordered that a copy of this Resolution be communicated to the Ministries/Departments of the Government of India, State Governments, Administrations of Union Territories and all other concerned.
R. K. CHATURVEDI, Jt. Secy. 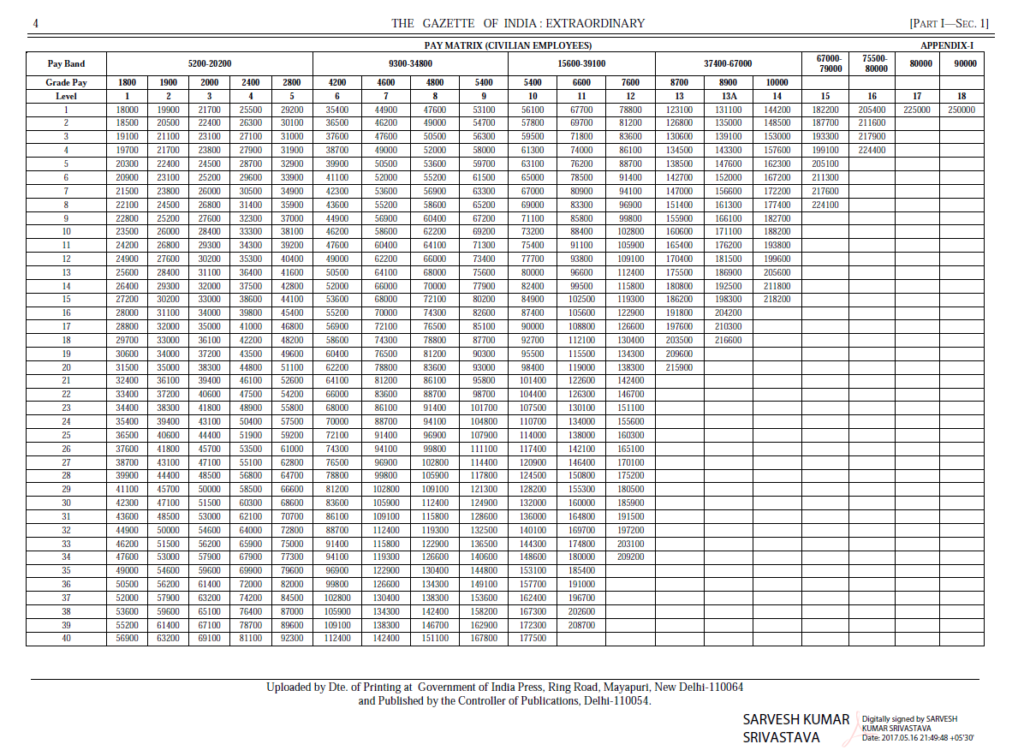