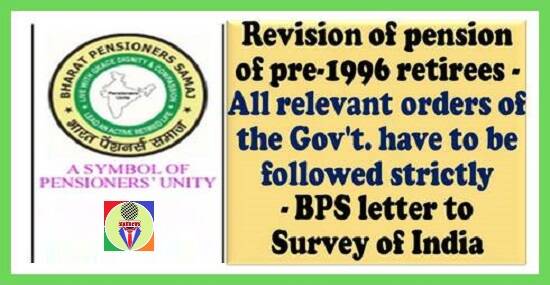 Revision of pension of pre-1996 retirees – All relevant orders of the Govt. have to be followed strictly : BPS writes to Survey of India

Revision of pension of pre-1996 retirees – All relevant orders of the Govt. have to be followed strictly : BPS writes to Survey of India

Thank you for your response to our letter for follow up action on the Resolution No. 16, to remove the Genuine Grievances of the Community of Pensioners in India.

The purpose behind these efforts is to bring relief to the community of pensioners in the country, who gave their best to the Govt., in their heyday.

In this particular case, you will readily appreciate that the persons aggrieved are very old pensioners(now in their 80’s and older) who retired before 1.1.96.

This Resolution was adopted as the affected pensioners, whose post had been upgraded on 1.1.96, brought to notice of the General Body of BPS that many of them(including Pre-96 Retired Deputy Directors, Survey of India) were suffering right from 1.1.96, as their pensions were being paid on the Routine Basis of Last Pay Drawn in the then prevailing lower pay scale for the post, which is INAPPLICABLE in their cases as it infringes the sanctified principle of Modified’ Parity of Pensions granted under DoP& PW OM dated 17.12.1998. First their pension on 1.1.96 needs to be revised in accordance with above quoted OM of 17.12.1998. so as to ensure that it is Not less than what they are entitled to at the minimum of the Revised scale of the post on 1.1.96(and then on 1.1.2006),

Your routine reply that you have Revised earlier pensions as per Gov’t. Orders quoted by you does not redress their pathetic Grievance as their pension prior to 1.1.2016 itself was wrong and needed to be revised. It is pointed out that the orders quoted by you do not supersede the earlier orders, but only add to them. All relevant orders of the Gov’t. have to be followed strictly. First Their existing pensions on 1.1.96 and then on 1.1.2006 have to be revised; and their entitled pension on Parity w.e.f. 1.1.2016 has to be determined with use of applicable Concordance Table (pertaining to the upgraded scale) at the correct stage, as per Extant Gov’t. Orders.

Since the ultimate purpose is not merely to know why the genuine Grievances have escaped redress so far but also to take appropriate measures to remove them without any further delay, I would request you to kindly revise their pensions first from 1.1.96 and then from 1.1.2006. Thereafter, their pension may be revised w.e.f.1.1.2016, as per the Orders quoted by you.

In view of the long time that has already elapsed in doing justice to very old/hapless pensioners/family pensioners and the nominees of life-time arrears, it is requested that IMMEDIATE action may, now, kindly be initiated to revise their pensions from 1.1.96 and disburse the Arrears at the earliest.

Bharat Pensioners Samaj would be grateful to you for this act of kindness to hapless old pensioners in the evening of their lives.

Copy w.c.t. the Secretary, DS&T, Technology Bhawan, New Mehrauli Road, Qutab Enclave, New Delhi 110016, along with a copy of the Resolution No. 16. 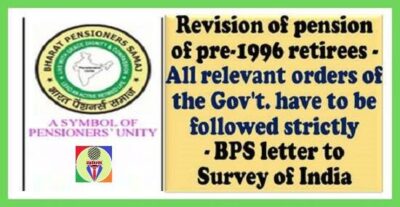