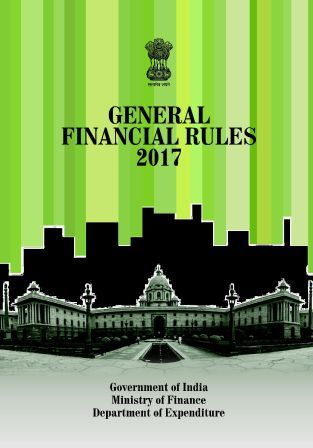 Rule 1 Short Title and Commencement: These rules may be called General Financial Rules, 2017 and they shall come into force at once and shall be applicable to all Central Government Ministries/ Departments, attached and subordinate bodies. The provisions contained in GFRs are deemed to be applicable to Autonomous Bodies except to the extent the bye-laws of an Autonomous Body provides for separate Financial Rules which have been approved by the Government.

Rule 2 Definition: In these rules, unless the context otherwise requires-

(ii) “Administrator” means Administrator of a Union Territory, by whatever name designated;

(iii) “Appropriation” means _ the assignment, to meet specified expenditure, of funds included in a primary unit of appropriation;

(iv) “Audit Officer” means the Head of an Office of Audit;

(v) “Competent Authority” means, in respect of the power to be exercised under any of these Rules, the President or such other authority to which the power is delegated by or under these Rules, Delegation of Financial Power Rules or any other general or special orders issued by the Government of India;

(x) “Controlling Officer” means an officer entrusted by a Department of the Central Government with the responsibility of controlling the incurring of expenditure and/or the collection of revenue. The term shall include a Head of Department and also an Administrator;

(xiv) “Financial Year” means the year beginning on the ist of April and ending on the 3ist of March following;

(xvill) “Head of Office” means (a) a Gazetted Officer declared as such in the Delegation of Financial Powers Rules and (b) any other authority declared as such under any general or special orders of the competent authority;

(xx) “Local Fund” means a local fund as defined in Rule 652 of the Treasury Rules;

(xxv) “Public Works” means civil/ electrical works including public buildings, public services, transport infrastructure etc., both original and repair works and any other project, including — infrastructure which is for the use of general public;

(xxvi) “Re-appropriation” means. the transfer of funds from one primary unit of appropriation to another such unit;

(xxix) “Subordinate authority” means a Department of the Central Government or any _— authority subordinate to the President;

(xxxi) CAPEX model: In the CAPEX Model, Capital expenditures is used by the buyer to straightway purchase goods followed by procurement of consumables, arranging comprehensive maintenance contract after warranty period and __ finally disposing the product after useful life;

(xxxii) OPEX model: In the OPEX model, the Seller provides the goods, maintains it and also provides the consumables as _ required and finally takes back the goods after useful / contracted life. The expenditure is made by the Buyer in a staggered manner as per the terms and conditions of the contract.

Rule 5 Removal of Doubts: Where a doubt arises as to the interpretation of any of the provisions of these Rules, the matter shall be referred to the Ministry of Finance for decision.

(i) The systems and procedures established by these Rules are subject to general or _ special instructions/ orders, which the Ministry of Finance may issue from time to time.

(ii) The systems and procedures established by these Rules may be modified by any other authority only with the express approval of the Ministry of Finance.

The undersigned is directed to inform that the General Financial Rules, 2017 (GFRs 2017) have been formulated which take effect with immediate effect. The GFRs, 2017 have been placed on this Ministry’s website www.finmin.nic.in.
2. The provisions of GFRs, 2017 are deemed to be applicable to Autonomous Bodies except to the extent to the bye laws of an Autonomous Body provides separate Financial Rules which have been approved by the Government.

(S. Naganathan)
Under Secretary to the Government of India

1. General Financial Rules (GFRs) are a compilation of rules and orders of Government of India to be followed by all while dealing with matters involving public finances. These rules and orders are treated as executive instructions to be observed by all Departments and Organisations under the Government and specified Bodies except otherwise provided for in these Rules.
2. General Financial Rules were issued for the first time in 1947 bringing together in one place all existing orders and instructions pertaining to financial matters. These have subsequently been modified and issued as GFRs 1963 and GFRs 2005.
3. In the last few years, Government has made many innovative changes in the way it conducts its business. Reforms in Government budgeting like removal of distinction in non-plan and plan expenditure, merger of Railway Budget with General Budget, focusing on outcomes through an improved Outcome Budget document, all needed to be reflected in the GFRs. Increased focus on Public Finance Management System(PFMS), reliance on the Direct Benefit Transfer (DBT) Scheme to ensure efficient delivery of entitlements, introduction of new e-sites like Central Public Procurement Portal, Government e-Marketing (GeM) Portal, Non-Tax Revenue Portal have also necessitated revision of the existing GFRs to keep them in tune with the changing business environment. The objective was to make the GFRs facilitate efficiency rather than create impediments in smooth and timely implementation while following principles of accountability and procedures of financial discipline and administrative due diligence. The Expenditure Management Commission set up in 2014 to recommend ways in which efficiency of public expenditure could be increased has also made several recommendations especially with respect to Autonomous Bodies. New rules on non-tax revenues, user charges, e-receipts portal have been added in addition to the manner in which Autonomous Bodies are run.
4. The PAC in April 2015, Group of Secretaries in February 2016 and EMC in March 2016 has recommended setting up a Task Force to review the GFRs so as to frame comprehensive rules to address the issues as highlighted in the above para.
5. GFRs, 2017 have evolved as a result of wide consultations with Central Government Ministries and Departments, some State Governments and other stakeholders at the Task Force stage and thereafter. The Discussion Draft was also uploaded on the MoF’s website. Secretaries of each Department/ Ministry of Government of India were asked to give their views for additions/ modifications, keeping in view their specific requirements of their domain. Detailed deliberations were also carried out within the Ministry. C&AG’s comments on the draft GFRs have also been taken into consideration.
6. The aim of any rule is to provide a framework within which an organization manages its business in a financially prudent manner without compromising its flexibility to deal with varied situations. The GFRs 2005 have been very comprehensively reviewed with the aim of promoting simplicity and transparency in the Government financial system and procedures. It is expected that the new GFRs 2017 will enable an improved, efficient and effective framework of fiscal management while providing the necessary flexibility to facilitate timely delivery of services.
7. Department of Expenditure would like to place on record the exceptional work done by the Task Force on Review of GFRs, the office of the C&AG, the office of the CGA, Budget Division of Department of Economic Affairs, the Ministries and Departments for their valuable inputs and its own officers for assiduously and meticulously completing this vital and challenging exercise in a time bound manner.
(ASHOK LAVASA)
Finance Secretary &
Secretary(Expenditure)
Department of Expenditure
Ministry of Finance
North Block, New Delhi
Dated: 11th February, 2017