Kiran Kumari 1 March 25, 2015 5:28 pm
CONTROLLER GENERAL OF DEFENCE ACCOUNTS
CENTRALISED PENSION DISBURSEMENT SYSTEM
CONCEPT PAPER
Ministry of Defence disburses appx Rs. 51,000 crore every year as pension benefits to 24.16 lakh defence pensioners – both service personnel as well as defence civilians. While pension sanction is being done in a centralised way – by PCDA (Pension) Allahabad in r/o Army and defence civilians; by PCDA (Navy) in r/o Navy personnel and by JCDA (AF) Subroto Park, New Delhi in r/o Air Force personnel, pension disbursement is being carried out by a number of
agencies who are working as PDAs (Pension Disbursing Agencies) – 28 Public Sector and 4 Pvt Sector Banks, 63 DPDOs, State Treasuries and Post Offices.
Banks have the largest number of pensioners on their roll – appx 18.06 lakh pensioners or 75% of the total number of defence pensioners. And they disburse Rs. 3800 crores every month (or Rs. 45,600 crores per annum which is almost 90% of the total pension disbursement to defence pensioners) as pension to these pensioners. Instances have come to notice where different practices have been followed by banks or where different interpretation have
been arrived at and implemented for one government order, resulting in complaints from pensioners. An analysis of grievances received at the Ministry or at CGDA office or at PCDA (Pension) office reveal that more than 95% of the complaints pertain to pensioners drawing their pension from the banks. The task of addressing these grievances and providing services to pensioners to their complete satisfaction is an arduous one. This, however, could be changed
by adopting a new paradigm for pension disbursement.
2. This new paradigm is centralised disbursement of pension. This simply means disbursing pension from a central agency viz. Centralised Pension Disbursement Agency (CPDA) to all the pensioners. 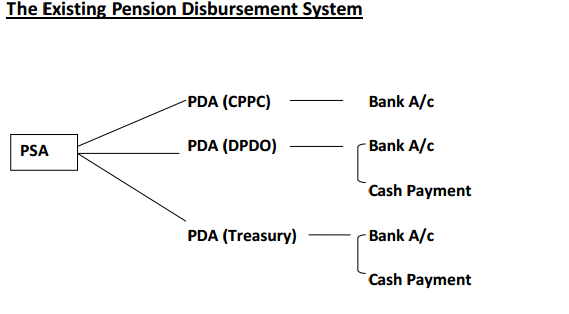 3. The present system of pension imbursement is an opaque one in the sense that it does not easily provide details reg. no of pensioners, category wise distribution of pensioners,  amount of pension disbursed in a month and govt’s pension liability. Collation of the information from various sources is quite difficult and the output is not always accurate.
4. Further, in the existing system, there is a multiplicity of PDAs ‐ 29 Banks, 63 DPDOs and a large number (500+) of State Treasuries. As mentioned earlier, many a times PDAs tend to interpret Govt. Orders differently. This, in some cases delays the implementation of the order itself and in some other cases the order gets to be implemented differently by different PDAs. In both cases, generally, pensioner is the sufferer. There are other issues/difficulties in the existing pension disbursement system:‐
I. With multiple PDAs, the system is not amendable to effective monitoring as well as grievance handling. It makes the task of all decision makers including the Ministry, a very difficult one.
II. There is a delay in booking the pension amount to Govt. account. This also makes it relatively difficult to know the exact pension liability.
III. Even at a given time, it becomes an arduous task to exactly find out the number of active defence pensioners (including categories‐wise) as the information is to be collated from a large no. of PDAs.
IV. Maximum pensioners are drawing pension from banks. It has been experienced that they (Banks) do not have dedicated staff to deal with pensioners’ issues. Also, they are not well conversant with orders/issues peculiar to Defence pension.
The Proposed System
5. The proposed system of Centralised disbursement of pension is not only transparent but easy for information processing and retrieval.