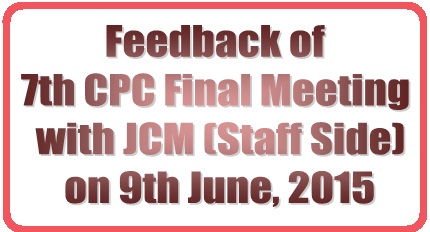 Seventh Pay Commission has taken many meetings with all possible stake holders, in this series the 7th CPC has called a final meeting with JCM (Staff Side) on 9th June, 2015.  JCM (Staff Side) was also prepared to take all issues on this matter and an urgent meeting was called just before the 7th CPC meeting, with standing committee members.  The first hand feedback  of this important meeting  has published by NFIR.

According this feedback the NFIR has mentioned the main point of issues only the detailed minutes is not available, hope JCM(Staff Side) will come with detail.  As published earlier the Minimum wages, fitment formula (multiplication factor) with other important issues i.e. rate of Increment, pay parity for common categories, date of effect of revised pay structure, revision of ex-gratia, parity in pension, rectification of MACP etc has discussed in the Final Meeting with 7th CPC.


NFIR has informed in his feedback that the revised pay structure and allowances is likely to be recommended to be given effect from January 1st, 2016. It is expected that the VII th CPC would submit its report to the Government by the end of August 2015

An important issue about Grade Pay or Pay Scale is not mentioned in NFIR feedback.  The text of NFIR letter is reproduced below:-

The General Secretaries of
Affiliated Unions of NFIR
Brother,

Responding to the invitation received from the VIIh CPC, the JCM (Staff Side) delegation met the Pay Commission this day 09th June 2015 and deliberated again in detail on the following issues:-
(a) Minimum wage — (15th ILC norms/Dr. Achroyed Formula for determining minimum wage as proposed in the JCM Staff Side Memorandum),
(b) Rate of increment.
(c) Fitment Formula,
(d) Qualification related Pay Scales,
(e) Pay parity for common categories.
(f) Date of effect of revised Pay Structure and allowances etc.,
(g) Upward revision of Ex-gratia to the families of employees killed in the course of performing duties,
(h) Parity in pension for eliminating the discrimination,
(i) Rectification of MACPS aberrations,
(j) Grant of increment to those retiring on 30th June and 31st December of the year.
Various other issues were also discussed with the VII CPC today. While the response of the Pay Commission by and large has been satisfactory on many points mentioned above, the revised pay structure/allowances is likely to be recommended to be given effect from January 1st, 2016. With today’s discussions in the final meeting with VII CPC, the deliberations by the JCM Staff Side got concluded.
It is expected that the VII th CPC would submit its report to the Government by the end of August 2015. Prominent leaders among those participated in the deliberations are Dr. M. Raghavaiah Leader (JCM) Staff Side, NFIR’ s President Guman Singh. Working President R.P.Bhatnagar and Joint General Secretary B.C. Sharma.
Yours fraternally,
(Dr. M. Raghavaiah)
General Secretary

NFIR letter can be accessed through this link

Loading...
Newer Post
Cash award schemes from Staff Benefit Fund (SBF) for wards of Railway Employees for outstanding performance in Academics and in the field of sports
Older Post
10 (+2) Point Charter of Demands submitted by the CTUs – Present Status for information and further course of action