Adhikari Dibyendu
Will the Minister of
FINANCE be pleased to state:-
(a) whether the Government proposes for flexible pension contribution for the informal workers in the country and if so, the details thereof;
(b) if not, proposal of the Government for the people with irregular incomes and particularly the women of the country who have not steady incomes; and
(c) the details of the report of the Pension Fund Regulatory and Development Authority
ANSWER
The Minister of State in the Ministry of Finance
(a) &( b) The Atal Pension Yojana (APY) has been launched by the Government of India in May, 2015, which is primarily targeted at the unorganised sector and informal workers. The registration of subscribers under APY started from June 1, 2015. The salient features of the Atal Pension Yojana are as under:
• Indian Citizens between the age group of 18 to 40 years eligible to join APY through their savings bank account or post office savings bank account.
• APY is based on defined benefit for providing guaranteed minimum monthly pension of Rs. 1000 or Rs. 2000 or Rs. 3000 or Rs. 4000 or Rs. 5000 at the age of 60 years based on pension amount chosen.
• The Central Government would also co-contribute 50% of the total contribution or Rs. 1000 per annum, whichever is lower, to each eligible subscriber, for a period of 5 years, i.e., from Financial Year 2015-16 to 2019-20, who have joined the APY before 31st March, 2016, and who are not members of any statutory social security scheme and who are not income tax payers.
• In case of premature death of Subscriber (death before 60 years of age), spouse of the subscriber has been given an option to continue contributing to APY account of the subscriber, for the remaining vesting period, till the original subscriber would have attained the age 60 years.
• In case of death of both subscriber and spouse, the entire pension corpus would be returned to the nominee.
• If the accumulated corpus based on contributions earns a lower than estimated return on investment and is inadequate to provide the minimum guaranteed pension, the Central Government would fund such inadequacy. Alternatively, if the actual returns during the accumulation phase are higher than the assumed returns for minimum guaranteed pension, such excess will be passed on to the subscriber.
With a view to provide flexibility to the subscribers of APY with seasonal or irregular income, besides the monthly mode of payment, quarterly and half yearly mode of payment of contributions have been provided in the Scheme. Further in case of default in payment of contribution, a subscriber may regularize the account by paying the overdue amount along with a minimal charge to obtain the guaranteed pension.
(c) The Pension Fund Regulatory and Development Authority (PFRDA) has intimated that the report of PFRDA and CRISIL on ‘Financial security for India’s elderly’ has, inter-alia, mentioned designing of a pension policy exclusively for women where contributions could be from the women’s families. Some tax relief to the savings held in the form of pension has also been mentioned.
********* 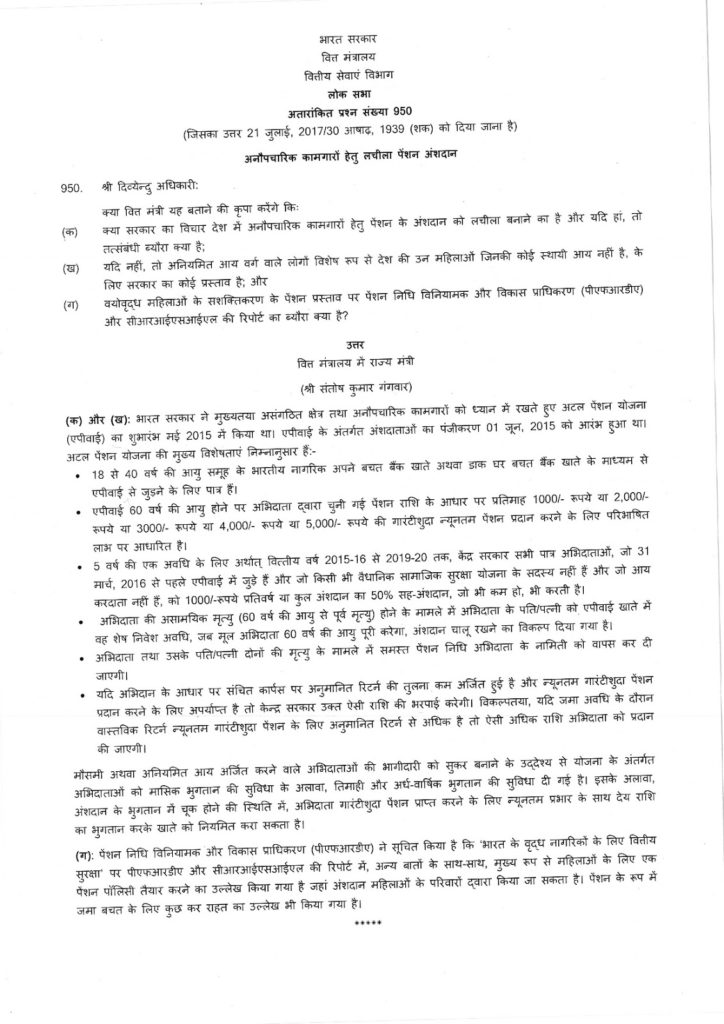