ANSWERED ON: 17.07.2017
Expansion of ESIC and EPF Ambit
DUSHYANT CHAUTALA

Will the Minister of
LABOUR AND EMPLOYMENT be pleased to state:-

(a)whether the Government proposes to extend the benefits under ESIC and EPF for construction workers and other unorganised sectors and if so, the details thereof;

(b)whether the Government has also requested the State Governments to send the details of beneficiaries under ESIC and EPF; and


(c)if so, the details thereof and the total number of workers of unorganised sectors registered under this scheme for availing benefit of ESIC and EPF, State/ UT-wise?
ANSWER
MINISTER OF STATE (IC) FOR LABOUR AND EMPLOYMENT
(SHRI BANDARU DATTATREYA)
(a) to (c): The construction workers getting salary upto Rs. 21000/- per month working in the construction companies situated in Employees’ State Insurance (ESI) implemented areas are covered under the ESI Act,1948. Construction site workers were also covered w.e.f. 01.08.2015. Similarly, Employees Provident Fund (EPF) & Miscellaneous Provisions Act, 1952 had been made applicable with effect from 31.10.1980 to the establishments engaged in building and construction industry where employing 20 or more persons. Thus, the benefits under the Schemes framed under EPF & MP Act, 1952 have already been extended to construction workers engaged in such establishments.
Both ESI Act, 1948 and EPF&MP Act,1952 are primarily for the workers in organized sector. As regards, un-organised sector, the ESIC has already launched two separate schemes to provide medical facilities to selected category of self-employed workers like Auto-rickshaw drivers and Domestic Workers and their family members on pilot basis at Delhi & Hyderabad but the response was not encouraging.
****** 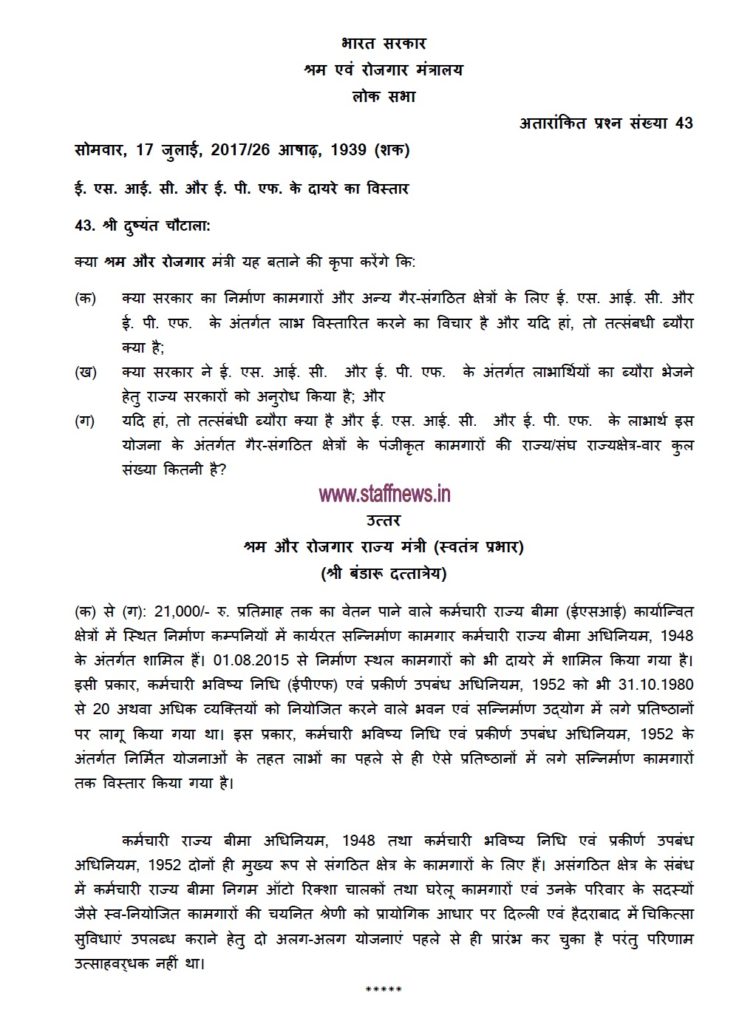