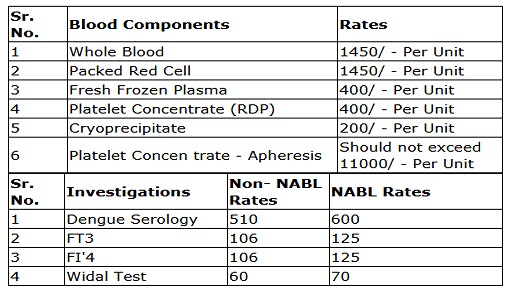 Subject: Clarifications regarding e-tender 2014 for empanelment of HCOs and determination of rates under CGHS.

Following are the clarifications regarding e-tender 2014 regarding fixation of rates:-

2. Annual Health Check-up for group ‘A’ Central Government Officers Aged ’40’ and above and for other categories of CGHS beneficiaries as specified by Government: It is clarified that annual Health checkup would henceforth be conducted by all CGHS empanelled hospitals. The relevant clause of MoA signed by empanelled hospitals is reproduced below:-

“AGREE FOR CONDUCTING ANNUAL HEALTH CHECK-UP FOR GROUP ‘A, CENTRAL GOVERNMENT OFFICERS AGED ’40, AND ABOVE AND FOR OTHER CATEGORIES OF CGHS BENEFICIARIES AS SPECIFIED BY GOVERNMENT.

The Hospital shall agree for conducting all investigations/ diagnostic tests / consultations etc. of the Central Civil Services Group ‘A’ officers of above 40 years of age and other categories of CGHS beneficiaries as specified by government from time to time as per the prescribed protocol , subject to the condition that the hospital shall not charge more than Rs.2000/ – for conducting the prescribed medical examination of the male officers and Rs.2200/ – for female officers of Central Government who come to the hospital/ institution with the requisite permission letter from their Department / Ministry/competent authority.

3. Beneficiaries undergoing IOL implantation: It is clarified that the cost of lens (IOL) would be reimbursable in addition to package charges for treatment procedures (sr. No. 154 to 159). With respect to order dated 21.8.2014 regarding IOL, it is clarified that if a beneficiary had been implanted Hydrophilic IOL in one eye earlier and now requires IOL in other eye, then in such a case Hydrophilic IOL would be permitted as per old rates of 2008. In all such cases prior permission by competent authority permitting use of Hydrophilic IOL based on advice of specialist would be required .

4. Package rates as mentioned in CGHS approved rate list for various treatment procedure are for semi-private ward. If the beneficiary is entitled for general ward there will be a decrease of 10% in these rates; for private ward entitlement there will be an increase of 15%. However, for investigations the rates as mentioned in CGHS list would apply irrespective of entitlement of the beneficiary.

5. The rates of whole Blood/ Blood Components would be as follows:-