Pay and Pension cannot be deferred, are rightful entitlement of the employees: Supreme Court

Pay and Pension cannot be deferred – Salary & Pension are rightful entitlement of the employees: Supreme Court

IN THE SUPREME COURT OF INDIA

The State of Andhra Pradesh and Another

2 This appeal arises from a judgment and order of the Andhra Pradesh High Court dated 11 August 2020. The State of Andhra Pradesh issued GOMs No.26 on 31 March 2020 and GOMs No. 37 on 26 April 2020. The backdrop for the orders was the outbreak of Covid-19 and the financial crises which had resulted as a consequence. The revenues of the State of Andhra Pradesh were impacted by the onset of the pandemic. The financial position of the State finds reference in the judgment of the High Court, which has been extracted below:

The above extract in the judgment of the High Court is based on the submissions of the State.

3 By GOMs No. 26 of 31 March 2020, the State Government determined that it was necessary, as an urgent measure, to provide for a deferment of the salaries and pensions which it was obligated to pay. Consequently, paragraph 5 stipulated as follows:

“5. Government, after careful consideration of the situation arising due to the COVID-19 outbreak, the economic consequences of the lock down, the cessation of the revenue inflows and extra burden imposed on the State’s resources to contain the epidemic & to provide relief to the people affected/likely to be affected, hereby orders for the deferment of Salaries/ Wages/ Remuneration/ Honorarium/Pensions on gross basis, as per the following pattern:

(i) There shall be (100)% deferment in respect of Hon’ble C.M./Hon’ble Ministers/Hon’ble M.L.As/ Hon’ble M.L.Cs, Chairperson & Members of all Corporations, elected representatives of all Local Bodies & people holding equivalent posts, as per the orders issued from time to time.

(ii) There shall be (60)% deferment in respect of All India Service Officers viz., IAS, IPS and IFS;

(iii) There shall be (50)% deferment in respect of all other Government employees, including workcharged employees & persons engaged under the category of direct individuals professions & through 3rd party, except Class-IV Employees;

(iv) There shall be (10)% deferment in respect of Class-IV, Out-sourcing, Contract and the Village & Ward Secretariat employees;

(v) The deferment mentioned in respect of Para 5(i), (ii),(iii) & (iv) supra shall be made applicable mutatismutandis in respect of the retired employees in the respective categories.

(vi) The above deferment shall be equally applicable to the serving & retired employees of all PSUs/Government aided Institutes/Organizations/Universities/Societies/Autonomous bodies/ Semi autonomous bodies, etc. in respect of their Salaries/ Wages / Honorarium / Pensions.”

4. It is also provided that the above orders would come into force in respect of the salary, wages, remuneration and pensions for the month of March 2020,payable in April 2020 and would continue to remain in force until further orders.

5. On 4 April 2020, there was a modification by the State Government in terms of GOMs No.27 which provided for the payment of full salary to the employees of three departments, namely, (i) medical and health department; (ii) police department; and (iii) sanitation workers working in rural local bodies or urban local bodies, such as Nagar Panchayats, Municipalities and Municipal Corporations.

6. On 26 April 2020, GOMs No.37 provided for a further modification under which the Government, having noticed the hardships which were being faced by the pensioners, directed the payment of full pension to all categories of pensioners.

7. A writ petition under Article 226 of the Constitution was filed before the High Court by a former District and Sessions Judge. The gravamen of the grievance was that salaries and pensions are due as a matter of right to employees and, as the case may be, to former employees who have served the State. Consequently, a direction was sought in the petition to the State Government to pay the outstanding salaries and pensions which had remained due.

(i) The PIL at the behest of a public spirited citizen was maintainable, the petitioner before the High Court having instituted the proceedings pro bono without any personal interest;

(ii) Pension is payable to the retired employees for the past services rendered by them to the State;

(iii) Under Rule 9 of the Andhra Pradesh Revised Pension Rules 1980,pension can only be withheld or deferred under specific circumstances such as if the pensioner is found guilty of grave misconduct or negligence during employment in a departmental or judicial proceeding. These circumstances had not been established;

(iv) Article 72 of the Andhra Pradesh Financial Code deals with the payment of salary to employees of the State, and provides that salary is payable on the last day of every month;

(v) The entitlement to the payment of salary is intrinsic to the right to life under Article 21 and to the right to property which is recognized by Article 300A of the Constitution;

(vi) The State could not by means of a government order have provided for the deferment of salaries and pensions without following recourse to law.(vii) Although the GOMs make reference to the state plan under Section 23 of the Disaster Management Act, 2005, none of the provisions of the said Act provide for deferred payment of salaries or pensions.

9. On the above premises, the High Court directed (i) payment of the deferred salary for the months of March-April 2020 together with interest at the rate of 12% per annum and (ii) payment of deferred pension for the month of March 2020 with a similar rate of interest.

10. Aggrieved by the judgment of the High Court, the Government of Andhra Pradesh moved these proceedings under Article 136 of the Constitution. The State Government clarified in its Special Leave Petition that it was restricting its challenge only to the component of interest which had been imposed by the judgment and order of the High Court. On 18 November 2020, while considering the Special Leave Petition at the preliminary hearing, the Court issued a direction to the effect that the deferred portion of the payments on account of salaries, pensions and honoraria due to the employees or, as the case may be, to former employees be paid in two equal tranches. The first was directed to be paid on or before 15 December 2020, while the second was directed to be paid on or before 15 January 2021. The direction in regard to the payment of interest was stayed by this Court.

11. In pursuance of the above directions, the Government of Andhra Pradesh has disbursed the full amount of salary and pensions which came to be deferred by the GOMs which have been noted earlier. The only issue which now survives for determination is the liability to pay interest.

12. Mr Shekhar Naphade, learned senior counsel appearing on behalf of the appellants with Mr Mahfooz Ahsan Nazki, learned counsel, submits that the decision to defer the payment of salaries and pensions was taken due to the precarious financial position in which the State found itself as a consequence of the pandemic. Mr Naphade submitted that immediately after the issuance of first GOMs, a relaxation was provided for front-line workers such as those in the police, health and sanitation departments. Moreover, by a subsequent relaxation a direction was issued for payment of pensions to the pensioners. Hence, it has been submitted that the State had acted bona fide and there would be no reason to saddle it with the liability to pay interest. Alternately, it has been submitted that if interest is directed to be paid, the payment should be confined only in regard to the employees of the State falling in categories 3, 4 and 5 of the GOMs dated 31 March 2020.

13. Opposing the submissions of Mr Naphade and Mr Nazki, Mr Yelamanchili Shiva Santosh Kumar, learned counsel appearing on behalf of the respondents, urged that the intervention of the High Court must be understood in the perspective of the background facts, namely, that the State had intervened by issuing an administrative order in exercise of its powers under Article 162 of the Constitution without enacting a proper legislation for the deferment of salary or, as the case may be, pensions.

Learned counsel highlighted the serious hardships which would have been caused to pensioners as a result of the order of deferment and hence submitted that the High Court is fully justified in entertaining the PIL and in directing payment of interest at the rate of 12% per annum.

14. The direction for the payment of the deferred portions of the salaries and pensions is unexceptionable. Salaries are due to the employees of the State for services rendered. Salaries in other words constitute the rightful entitlement of the employees and are payable in accordance with law. Likewise, it is well settled that the payment of pension is for years of past service rendered by the pensioners to the State. Pensions are hence a matter of a rightful entitlement recognised by the applicable rules and regulations which govern the service of the employees of the State. The State Government has complied with the directions of this Court for the payment of the outstanding dues in two tranches. Insofar as the interest is concerned, we are of the view that the rate of 12% per annum which has been fixed by the High Court should be suitably scaled down. While learned counsel for the respondents submits that the award of interest was on account of the action of the Government which was contrary to law, we are of the view that the payment of interest cannot be used as a means to penalize the State Government. There can be no gainsaying the fact that the Government which has delayed the payment of salaries and pensions should be directed to pay interest at an appropriate rate.

16. The appeal is accordingly disposed of in terms of the above directions. There shall be no order as to costs.

17. Pending applications, if any, stand disposed of. 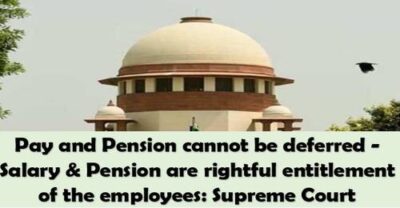