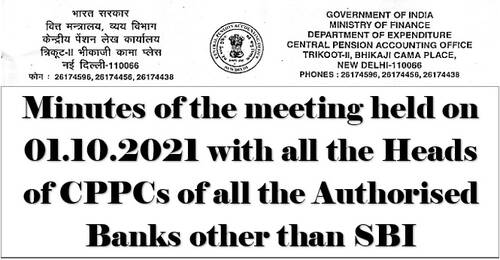 Disbursement of Pension, Issue of Pension Slips and Return of PPO: Meeting between CPAO & Banks on 01.10.2021

Disbursement of Pension, Issue of Pension Slips and Return of PPO: Meeting between CPAO & Banks on 01.10.2021 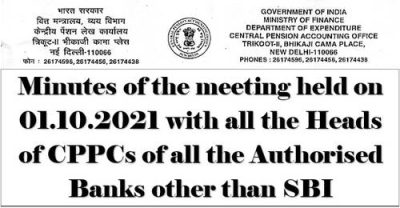 Minutes of the Meeting

Kindly find enclosed the Minutes of the VC Meeting held under the Chairmanship of Chief Controller ( Pensions), on 01.10.2021 at 11:00A.M, with the Heads of CPPCs/Government Business Divisions of all authorized banks (other than SBI) for information and further necessary action.

This issues with the approval of Chief Controller (Pensions).

Copy for information to:-

Minutes of the meeting held on 01.10.2021 with the Heads of CPPCs of all the Authorised Banks other than SBI

A Meeting was held on 01.10.2021 at 11:00 A.M under the Chairmanship of Chief Controller (Pensions) with the representatives of Heads of CPPCs of Authorised Banks (other than SBI) to discuss pension related issues. At the outset, the Chief Controller (Pensions) welcomed all the participants and emphasized on the need for timely payment of pension and arrears into the accounts of the pensioners/family pensioners. Subsequently, agenda items of the meeting were discussed in detail and following decisions were taken.

It is observed that e-scrolls are pending since 2016 in some banks. It was informed by some banks that technical issues are sometimes faced by CPPCs during uploading of e-scroll data. Sr. TD (NIC) suggested that the procedure of e-scroll upload would be reiterated and  will be made available at CPAO’s website and CPAO’s Youtube channel.

All the CPPCs were also requested to send their issues related to uploading of e-scroll at sraotech67[at]gmail[dot]com and kumar[dot]davinder[at]nic[dot]in for early resolution.

Further, Banks were requested to contact the RBD section (CPAO) and clear up the old pendency on priority basis and ensure timely submission of e-scrolls in confirmation of amount claimed from RBI.

(Action : All Banks and NIC, CPAO)

Banks were also requested to share the cases with CPAO in which Undertaking Certificate is not received with the e-PPO. CPAO will accordingly take up the matter with the respective PAOs.

All the Banks were requested to comply w ith DoPPWs OM dated 22.06.2021 regarding the issuance of pension slips by Pension Disbursing  Banks on a monthly basis. The issuance of pension slip is also mentioned under the “Roles and Responsibilities of Home Branches” of Para 12.1 of Scheme Booklet. The pension slip should provide complete details of monthly pension paid along with the break-up of the amount credited and tax deductions. It was also requested that banks may explore using social media applications like Whatsapp in addition to SMS and email.

4. Return of PPO, if pension has not been credited to the account of the pensioner for a period of 3 years and above

All Banks were directed to follow the guidelines of the Scheme Booklet and return the PPOs, if pension had not been credited to the account of the pensioner for a period of 3 years and above.

Furthermore it was also decided that CPAO (N C) will also prepare a list of such pensioners and provide to the Banks.

(Action: All Banks and NIC:CPAO )

It was decided that all the Banks will submit the master data to CPAO for reconciliation on a quarterly basis.

Banks were requested to expedite the process of conversion of old PPO to 12 digit PPO number and send scanned copies of PPOs along with the requisite documents to CPAO to obtain the 12 digit PPO No.

It was pointed out that there are a considerable number of pensioners against whom the 12 digit PPO number has not yet been allotted. CPAO will share the information available in its database.

NIC (CPAO) also informed that the 12 digits have been allotted in some cases but Bank CPPCs are still using the old PPO numbers in e-scrolls. Banks were requested to rectify such cases.

(Action: All Banks and NIC, CPAO)

It has been observed that in cases where the family pensioner has an account in a bank other than the pensioners account, start of family pension is considerably delayed.

In view  of the  above, all the  banks were  requested  to adhere to the scheme guidelines and expedite the process of transfer of necessary documents to the bank of family pensioners.

8. Function of multiple CPPC under an Umbrella CPPC

It has been noticed especially in the case of Punjab National Bank that multiple internal CPPCs are functioning under an authorized umbrella CPPC. Whereas this office has no comments on internal division of work however, in case of Punjab National Bank it has been noticed most of the time there is lack of coordination between the CPPC as authorised by CPAO and other internal CPPCs which results in delay of pension processing, data retrieval, grievances redressal and return of PPOs for authorisation of pension to next entitled family pensioner.

Therefore, it is suggested that either PNB should take approval of multiple CPPCs like SBI and the same should be mapped to CPAOs system or develop a robust system of coordination between the different internal CPPCs.

The matter of audit objection will be taken up separately with the bank.

Keeping in view of the actions mentioned above,

(b) if banks do not receive the response from CPAO in a timely manner, they can raise the matter with the CC(P) via e-mail.

(c) A review meeting will be tentatively held on 18/19.10.2021 where the progress of the banks will be analysed. f the banks fail to comply with the minutes, another VC will be taken at higher authority.

11. The meeting ended with a vote of thanks to the chair.