Concession to persons re—employed in Government Service : Payment of Travelling Allowance - Clarification by DoE No. 19030/6/2010-E.IV Government of

HC relief to retired govt employees residing in non-CGHS areas
Feedback by Re-employed pensioners on stoppage of Dearness Relief:Fixation of Pay of re-employed Pensioners
TA/DA to retired government servants appearing as witnesses in proceedings before the CDI in CVC

No. 19030/6/2010-E.IV
Government of India
Ministry of Finance
Department of Expenditure

References have been received whether the Travelling Allowance (TA) admissible to pensioners re-appointed to Govt. service, under SR 107 of FR & SR Part II (Travelling Allowance Rules) includes TA in respect of family of the pensioner and other TA entitlements which a serving Government official is normally entitled to on transfer.

2. The matter has been considered and it has been decided that pensioners re-employed to posts, where holding of a post under the Central Government is a pre-requisite for such re-employment or where the Recruitment Rules of the post to which the pensioner is re-employed provides this as one of the qualifications, would be entitled to Travelling Allowance subject to the following:

i) The entitlement for Travelling Allowance would be with reference to the post last held and the last pay drawn under the Government, at the time of retirement.

ii) The provisions of SR 116 of the TA Rules, as admissible to Govt. officials on transfer in public interest, would be applicable.

sd/-
(Subhash Chand)
Deputy Secretary to the Govt. of India 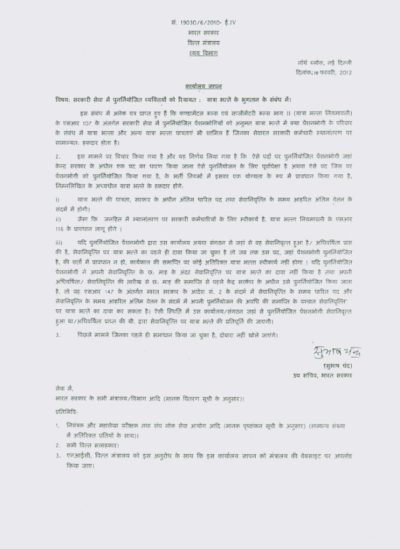