Subject: Holidays to be observed in Central Government Offices during the year 2014.

It has been decided that the holidays as specified in the Annexure -I to this O.M. will be observed in all the Administrative Offices of the Central Government located at Delhi/New Delhi during the year 2014. In addition, each employee will also be allowed to avail himself/herself of any two holidays to be chosen by him/her out of the list of Restricted Holidays in Annexure – II
2. Central Government Administrative Offices located outside Delhi / New Delhi shall observe the following holidays compulsorily in addition to three holidays as per para 3.1 below:
1. REPUBLIC DAY
2. INDEPENDENCE DAY
3. MAHATMA GANDHI’S BIRTHDAY
4. BUDDHA PURNIMA
5. CHRISTMAS DAY
6. DUSSEHRA (VIJAY DASHMI)
7. DIWALI (DEEPAVALI)
8. GOOD FRIDAY
9. GURU NANAK’S BIRTHDAY
10. IDU’L FITR
11. IDU’L ZUHA
12. MAHAVIR JAYANTI
13. MUHARRAM
14. PROPHET MOHAMMAD’S BIRTHDAY (ID-E-MILAD)
3.1. In addition to the above 14 Compulsory holidays mentioned in para 2, three holidays shall be decided from the list indicated below by the Central Government Employees Welfare Coordination Committee in the State Capitals, if necessary, in consultation with Coordination Committees at other places in the State. The final list applicable uniformly to all Central Government offices within the concerned State shall be notified accordingly and no change can be carried out thereafter. It is also clarified that no change is permissible in regard to festivals and dates as indicated.
1. AN ADDITIONAL DAY FOR DUSSEHRA
2. HOLI
3. JANAMASHTAMI (VAISHNAVI)
4. RAM NAVAMI
5. MAHA SHIVRATRI
6. GANESH CHATURTHI / VINAYAK CHATURTHI
7. IVIAKAR SANKARANTI
8. RATH YATRA
9. ONAM
10. PONGAL
11. SRI PANCHAMI / BASANT PANCHAMI
12. VISHU/ VAISAICHI / VAISAKHADI / BAHAG BIHU / MASHADI UGADI / CHAITRA SUKLADI / CHETI CHAND / GUDI PADAVA 181 NAVRATRA / NAUROZ/CHHATH POOJA/KARVA CHAUTH.
3.2 No substitute holiday should be allowed if any of the festival holidays initially declared subsequently happens to fall on a weekly off or any other non¬working day or in the event of more than one festivals falling on the same day.
4. The list of Restricted Holidays appended to this O.M. is meant for Central Government Offices located in Delhi / New Delhi. The Coordination Committees at the State Capitals may draw up separate list of Restricted Holidays keeping in view the occasions of local importance but the 9 occasions left over, after choosing the 3 variable holidays in para 3.1 above, are to be included in the list of restricted holidays.
5.1 For offices in Delhi / New Delhi, any change in the date of holidays in respect of Idu’l Fitr, Idu’l Zuha, Muharram and Id-e-Milad, if necessary, depending upon sighting of the Moon, would be declared by the Ministry of Personnel, Public Grievances and Pensions after ascertaining the position from the Govt. of NCT of Delhi (DCP, Special Branch, Delhi Police).
5.2 For offices outside Delhi / New Delhi, the Central Government Employees Welfare Coordination Committees at the State Capitals are authorised to change the date of holiday, if necessary, based on the decision of the concerned State Governments / Union Territories, in respect of Fitr, Zuha, Muharram and Id-e-Milad.
5.3 It may happen that the change of date of the above occasions has to be declared at a very short notice. In such a situation, announcement could be made through P.I.B. /T.V. / A.I.R. / Newspapers and the Heads of Departments/ Offices of the Central Government may take action according to such an announcement without waiting for a formal order about the change of date.
6. During 2014, Diwaii (Deepavali) falls on Thursday, October 23, 2014 (Kartika 01). In certain States, the practice is to celebrate the occasion a day in advance, i.e., on “Narakachaturdasi Day”. In view of this, there is no objection if holiday on account of Deepavali is observed on “Naraka Chaturdasi Day (in place of Deepavali Day) for the Central Government Offices in a State if in that State, that day alone is declared as a compulsory holiday for Diwali for the offices of the State Government.
7. Central Government Organisations which include industrial, commercial and trading establishments would observe up to 16 holidays in a year including three national holidays viz. Republic Day, Independence Day and Mahatma Gandhi’s birthday, as compulsory holidays. The remaining holidays / occasions may be determined by such establishments / organisations themselves for the year 2014, subject to para 3.2 above.
8. Union Territory Administrations shall decide the list of holidays in terms of instructions issued in this regard by the Ministry of Home Affairs.
9. In respect of Indian Missions abroad, the number of holidays may be notified in accordance with the instructions contained in this Department’s O.M. No.12/5/2002-JCA dated 17th December, 2002. In other words, they will have the option to select only 13(Thirteen) holidays of their own after including in the list, three National Holidays and Mahavir Jayanti included in the list of compulsory holidays and falling on day of weekly off.
10. In respect of Banks, the holidays shall be regulated in terms of the extant instructions issued by the Department of Financial Services, Ministry of Finance.
11. Hindi version will follow.
sd/-
(Ashok Kumar)
Deputy Secretary (JCA)
ANNEXURE-I 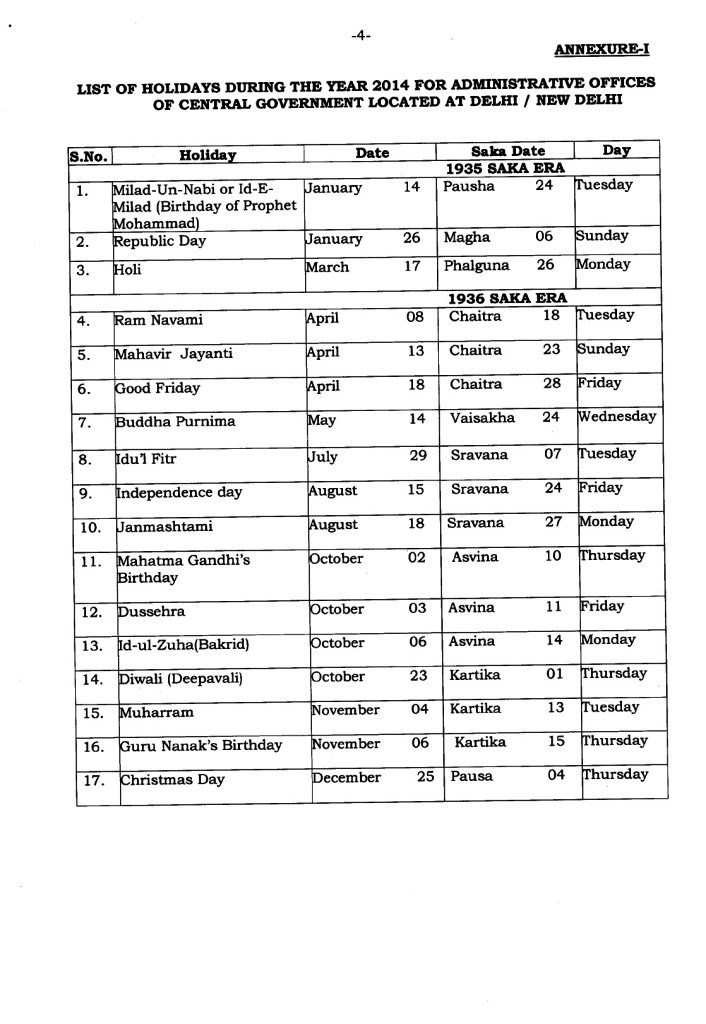 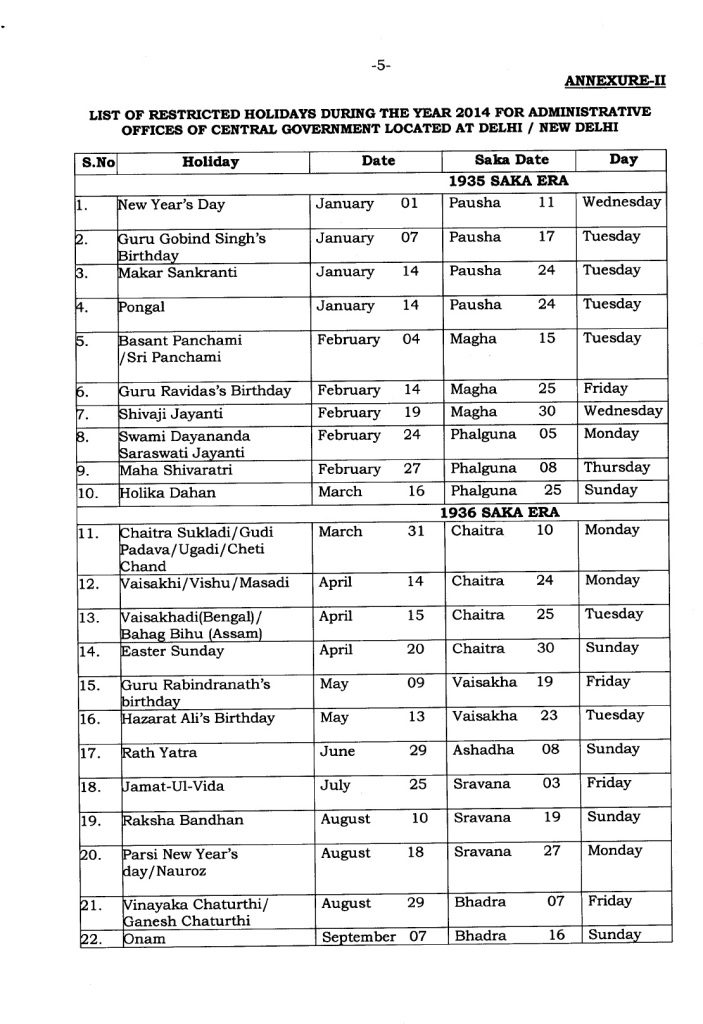 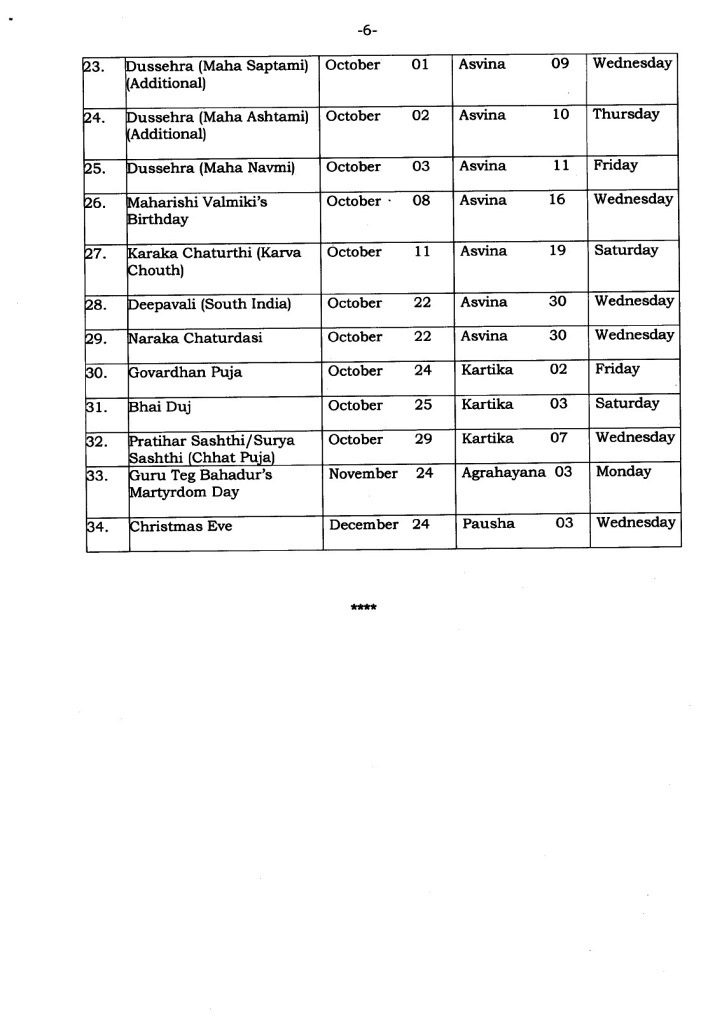 Loading...
Newer Post
Representation from Government servant on service matters.
Older Post
Framing of Guidelines for smooth functioning of Persons with Disabilities (PwDs) in their duties in Government services.