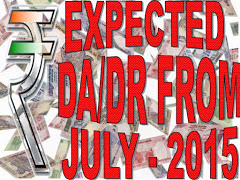 Speculation of DA/DR from July, 2015 on the basis of AICPIN of Jan, 2015 is not possible.  The 1 point increase in Jan, 2015 AICPIN after 4 months stationary AICPIN is unexpected variation, this type of increase/decrease in future AICPIN making much tough to speculate future DA/DR.  Three situations are given in undermentioned table is showing 117% to 120% future DA/DR from Jul-2015. Readers are requested not to take it final and study the following table.  On the other hand the approval of 6% increase in Dearness Allowance & Dearness Relief from Jan, 2015 is also pending at govt. side, may be announced in 2nd week of March, 2015.  Further, the estimation of two installment of DA/DR from Jan-2015 & Jul-2016 is important for expected pay and allowances in 7th CPC.
Following table only showing the effect of Jan-2015 months’ AICPIN increase

The All-India CPHW for January, 2015 increased by 1 point and pegged at 254 (two hundred and fifty four). On 1-month percentage change, it increased by 0.40 per cent between December, 2014 and January, 2015 when compared with the decrease of (-) 0.84 per cent between the same two months a year ago.
The largest upward pressure to the change in current index came from Housing group contributing (+) 1.36 percentage points to the total change. At item level, Wheat, Wheat Atta, Arhar Dal, Masur Dal, Moong Dal, Groundnut Oil, Mustard Oil, Fish Fresh, Goat Meat, Milk, Cigarette, Firewood etc. are responsible for the increase in index. However, this increase was restricted by Rice, Eggs (Hen), Onion, Vegetable and Fruit items, Sugar, Petrol etc., putting downward pressure on the index.
The year-on-year inflation measured by monthly CPI-1W stood at 7.17 per cent for January, 2015 as compared to 5.86 per cent for the previous month and 7.24 per cent during the corresponding month of the previous year. Similarly, the Food inflation stood at 7.81 per cent against 5.73 per cent of the previous month and 8.94 per cent during the corresponding month of the previous year.
At centre level, Haldia reported a maximum increase of 18 points followed by Jamshedpur (7 points), Lucknow (6 points), Quilon (5 points) and Srinagar & Vadodra (4 points each). Among others, 3 points rise was observed in 6 centres, 2 points in 9 centres and 1 point in 17 centres. On the contrary, Rourkela recorded maximum decrease of 7 points followed by Bhilai & Coimbatore (5 points each), Madurai Labac Silchar (4 points each). Among others, 3 points fall was registered in 5 centres, 2 points in 2 centres and 1 point in 13 centres. Rest of the 15 centres’ indices remained stationary.
The indices of 36 centres are above All India Index and other 40 centres’ indices are below national average. The index of Bhopal and Bokaro centre remained at par with all-India index.
The next index of CPI-1W for the month of February, 2015 will be released on Tuesday, 31st March, 2015. The same will also be available on the office website www. labourbureau. gov. in.
sd/-
(S. S. EGI)
DIRECTOR