Introduction of online filing of APAR for other AIS and Gr A Central Services.

To
Cadre Controlling Authorities,
(as per the enclosed list.)

As you are aware, recording of Performance Appraisal Report is undertaken annually as it provides the basic and vital inputs for development of an officer. The PARS of All India Services and other Group ‘A’ Central Services’ officers are written as per Schedule/ timelines enshrined in the relevant rules of the Service. The Performance Appraisal Reports not recorded within prescribed schedule/timelines are treated as ‘time barred’ and where dates are not indicated by the officer reported upon, reporting/ reviewing/ accepting authority, such PARS are taken on record assuming that these Would have been recorded in time and dates were left inadvertently. Instances, however, have been coming to the notice where such gaps are exploited by ante-dating self assessment or remarks being left undated intentionally.
2. With a view to address these issues, online reporting was introduced with effect from 1st April, 2014 for the assessment year 2013-14 in respect of IAS officers on pilot basis. For this, an application christened as SPARROW [Smart Performance Appraisal Report Recording Online Window) was developed by NIC based on the inputs/comments of all stakeholders. During the year 2013-14, 5150 PARS were generated online. Out of these, a substantial number of PARS were completed online and reached the respective dossier of officers in SPARROW. Cadre Controlling Authorities, officers concerned and DoPT can access these dossiers and download the PARS as per the requirements. Thus in addition to addressing the unsavory practices of ante-dating, remarks being left undated intentionally, following advantages have also accrued as a result of online recording:

(a) More probity and transparency in recording of PARS.

(b) No loss of PARS in transition.

(d) Easy and immediate access to the dossiers by unauthorized users.

3. Considering the success of online reporting in respect of IAS officers, it is proposed to roll out online filing to other two All India Services and Group ‘A’ Central Services participating in Central Staffing Scheme to address similar issues.
4. The Cadre Controlling Authorities are, therefore, requested to obtain approval of Competent Authority and simultaneously make preparations as indicated in annexure for introduction of online recording. Demonstration of the operation and functioning of SPARROW is proposed to be organized separately, for which a communication would be sent in due course. The software can be tweaked/customized by NIC as per the requirement of the Services based on their feedback/ inputs.
5. Meanwhile to begin with, all Members ofthe Service may be sensitized to get NIC email id and password as access to the application would be through NIC-email id which would have to be registered first. in order to authenticate the PAR, each officer/authority involved in the channel of reporting would have to be issued/provided Digital Signature. Letter of Secretary [DEITY) about the launch of eSign-which is an online service without using physical dongles that offers application service providers the functionality to authenticate signers and perform the digital signing of documents using Aadhar e-KYC service, is also enclosed as annexure II.
6. I would request the Departments to get in touch with the Controller of Certifying Authorities, DEITY and project the requirements for issue of Digital Signature to its officers. A line of confirmation of the follow up on above would be highly appreciated.

With regards,
Yours Sincerely,
(Rajiv Kumar)
EO and AS 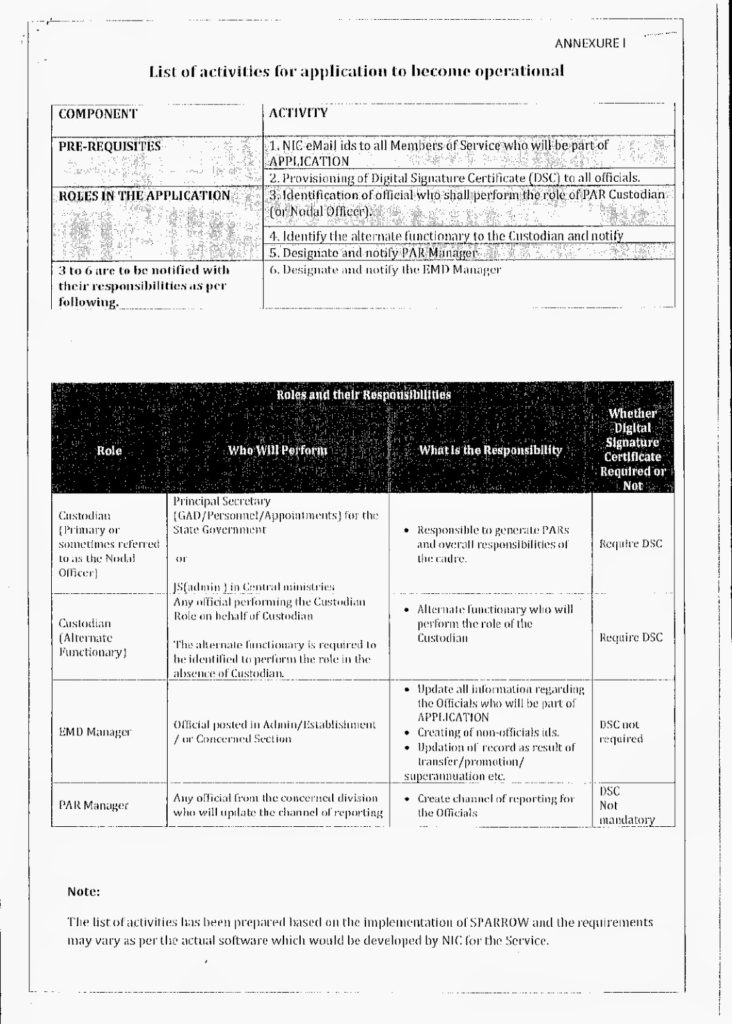