Issue of Pensioners Identity Card to Pensioners: Specimen Copy of I Card

The undersinged is directed to say that the revised instructions laying down guidelines/specifications for issue of Identity Card for pensioners have been issued vide this Department’s OM of even no. dated 12.08.2015 and 20.08.2015. Meetings were also taken on this issue by Secretary (Pension) with the representatives of all Ministries/Departments on 3rd/4th September 2015. A copy of the minutes of the meeting is again sent herewith.
2. This Department has procured a duplex thermal Colour Printer. This printer was launched by Hon’ble MOS(PP) on 26.11.2015 at Vigyan Bhawan in the Awareness Workshop on Bhavishya. Plastic Identity Cards generated through Bhavishya Software were issued to the retiring/retired employees of the Departments under MOS(PP). Specimen copy of Identity Card is enclosed.
3. It is requested that necessary action to issue Plastic Identity Cards to the employees retiring from your Ministries/Departments and attached and subordinate offices under your control may be taken. Inhouse / ourside printing facility may be used as appropriate depending on the requirements.

sd/-
(Harjit Singh)
Dy. Secretary to the Govt. of India
Minutes of the meetings held in the Conference Hall, 5th Floor, Sardar Patel Bhawan, New Delhi on 3rd and 4th September, 2015 to discuss the issues regarding Pensioners’ Identity Card and verification of qualifying service for pension.

The meetings to discuss the above issues were held as per the following schedule:

2. Secretary (Pension) emphasised the need for issuing Pensioners Identity Card to all retiring employees in a uniform and proper manner in accordance with the guidelines issued by the Department of Pension & PW on 12.8.2015 and 20.8.2015. He specifically referred to the instructions that the pensioners Identity card should be in the prescribed format, neatly printed on a good quality plastic card (in Delhi and other metro/big cities) or neatly printed (not hand written) on a good quality paper and laminated (in other places where the facility of printing on a plastic card is not available). Based on the suggestions received in the meeting, the following decisions were taken:
(i) Department of Pension & PW will initiate a proposal for obtaining approval of IFD for procuring a printer for printing of Identity cards on Plastic Cards and issuing the same in respect of the employees retiring from Department of Pension & PW, DoPT, DARPG, Department of Space and D/o DONER.
(ii) The other Ministries/Departments will take action for procuring the printer and issuing the Plastic Cards to the employees retiring from the respective Ministry/Department, after obtaining necessary financial approvals.
(iii) Ministries/Departments will ask the attached and subordinate offices under them to take similar action in respect of the employees retiring from those organisations.
(iv) The specifications of the printer and plastic card would be decided and intimated by DoP& PW to all concerned.
(v) Department of Pension & PW will decide the colour of the Pensioners Identity Card and intimate to all concerned.
(vi) The pensioners identity card will be issued to the retiring employees free of charge
3. Secretary (Pension) invited the attention of the participants to the statutory provisions regarding issue of certificates on completion of qualifying service of 18 years and 5 years before the date of superannuation and asked the Ministries/Departments to scrupulously follow these provisions so that the employees do not have to face any hardship at the time of retirement on account of non-verification of the service. Ministries/Departments would be requested to intimate the number of cases in which the stipulated certificate of completion of qualifying service of 18 years and 5 years before retirement has not been issued. 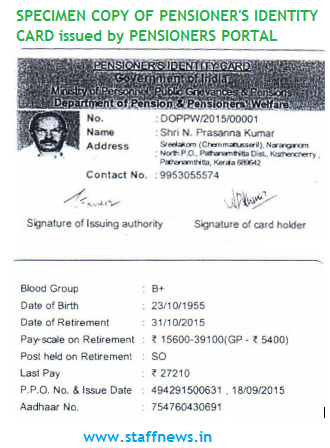