Kiran Kumari 0 May 20, 2016 3:02 am
Doctors threaten strike against 7th Pay commission: Medical Dialogue Article
It is that time of the DECADE when employees working with the biggest employer of the country, the Government, are looking forward to their pay revisions. Obviously, as opposed to the private sector, where pay scales are revised on almost a yearly basis, government pay revisions happen only once in a decade and hence considered to be a very big deal.
Impending the new pay commission, which shall be applicable from September, 2016, many medical practitioners are dreading for the want of a decent livelihood, if some of the recommendations are actually put into place. Since the recommendations came out last year, there has been a strong opposition brewing in the medical fraternity against these recommendations.
In particular doctors are opposing the recommendation of this pay commission that calls for a drastic fall in the Non-Practicing Allowance that is paid to doctors in the government sector, to prevent them from conducting private practice. The logic of NPA is indeed to compensate the government doctors vis-à-vis their private counterparts and make up for the growing disparities in the pay between the two sectors.
The 6th Pay Commission put NPA for doctors as part of basic salary and it was 25% of basic salary. With the 7th pay commission the percentage has been reduced to 20% of basic salary. Further with this commission’s recommendation NPA shall not treated as part of basic pay, but as a separate allowance. This makes the HRA and therefore the final salary of the doctors lower than expected. Moreover, this goes completely against the expectations of doctors who were demanding this to be raised to 40%. 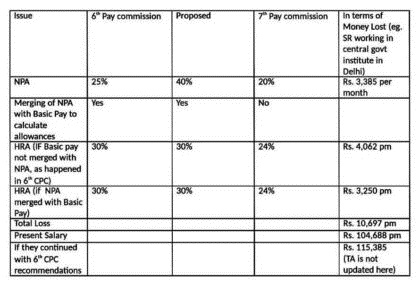 Illustration of the expected payscales with the 7th pay commission ( figures are rough approximates) Image source: FORDA
A couple of delegates representing government doctors led by Dr Rajeev Sood ( RML Hospital) met with the officials at the Secretariat to put forward their demands. The response however was mild. “the authorities are not even considering any of our demands. While they did listen to our point on the NPA, we have not been given any indication, whether it will reflect in the review or not,”he explained

What are the doctors demanding?

Across the nation, the doctors seem to be demanding only one thing- UNIFORM PAY. Currently, there are disparities in the pay scales of doctors within institutions, across institutions ( be it Central, state or autonomous) , across states, and finally there is a glaring disparity that exists between the pay scales of the government and the private sector
“When it came to nurses, the pay commission did not give them a major hike stating that government nurses are better paid than private nurses and hence there should not be much of an increase. However, when it came to doctors, no such comparison was made….” Dr Rajeev Sood elaborated.
Not only this, there are disparities existing the policies of Allowances that are paid across institutions. Doctors across the nation, demand a sense of equality, with equal pay for equal work becoming the rising motto. “We have been fighting to implement the Uniform Central Residency Scheme across the country to bring a sense of uniformity. Sadly, there is no government will, towards its implementation and as a result you hear cries of shortage of medical staff in the government setups. And now to add to our misery for the next ten years, we have these recommendations,” said Dr Pankaj Solanki, President FORDA
As pointed out by almost all the doctors, with the glaring disparities between the government and the private sector, no fresher would like to join the government setup and the so-called shortage and BRAIN DRAIN is expected to accelerate if the pay-scale disparities widen.

While there are some senior doctors at the fag end of their government career, who are waiting for the recommendations to come and then planning to retire towards the private sector, on the other hand, there are the young medical professionals who are now going to think twice before joining the government as a start of their career.
The worst hit, however, from the recommendations would be the young medical professionals who are already employed with the government, who have already dedicated their years of practice in the government setup and are now extremely disappointed with the recommendations.
Federation of resident doctors association, FORDA, a umbrella body of 15000 resident doctors in the capital have threatened a strike, if the government still does not listen to their demands. It reported that government doctors from other organisations and states have shown their inclination towards the strike opposing the recommendations.
“Government is deciding our pay scale, and does not even bother to listen to our demands. They do not even give us appropriate representation in the committee. While no doctor likes to go on strike, we will do exactly so if the existing recommendations of the 7th Pay commission are given a go ahead.” Said Dr Pankaj Solanki, President FORDA.
The doctors have given time till end of May for the government to respond to their demands failing which the said doctors will go on an indefinite strike.