Attention is invited to Board’s letter of even number dated 28.02.2011 by which, in addition to three chances given earlier vide Board’s letters of same numbers dated 30.03.2001, 06.09.2001 and 28.07.2004, fourth chance was also given to the existing Hospital Attendants and other erstwhile Group ‘D’ staff who are otherwise eligible as per provisions of IREM to appear in the selection without insisting the condition of qualification of Matriculation prescribed for promotion as Dresser Gr.III/OTA GrIII.
2. Pursuant to the demand raised by both the Federations viz. AIRF and NFIR for continuance of relaxation for non-matric Hospital Attendants to appear in selection being conducted for their promotion to the post of Dresser Gr.III/OTA Gr. III without insisting the qualification of Matriculation, the matter has accordingly been considered, in consultation with Health Directorate, by the 8Jard. It has been decided that 50% of vacancies in the category of Dresser Gr.III/OTA Gr.lll may be filled from existing staff in service as on 10.05.1998 who are otherwise eligible without insisting the condition of educational qualification of Matric pass the basis of seniority-cum-suitability__and the remaining 50_% vacancies may be filled from amongst those Hospital Attendants who are having the qualification of Matriculation (10th pass) as per  the extant procedure contained in this Ministry’s letter  No.PC-V/9811/11/18(A) dated 10.05.1998 . This provision will continue to remain in force till there are no non-matriculate Hospital Attendants on zonal Railways.
Please acknowledge receipt.
(M.K. Meena)
Deputy Director Estt. (N)
Railway Board 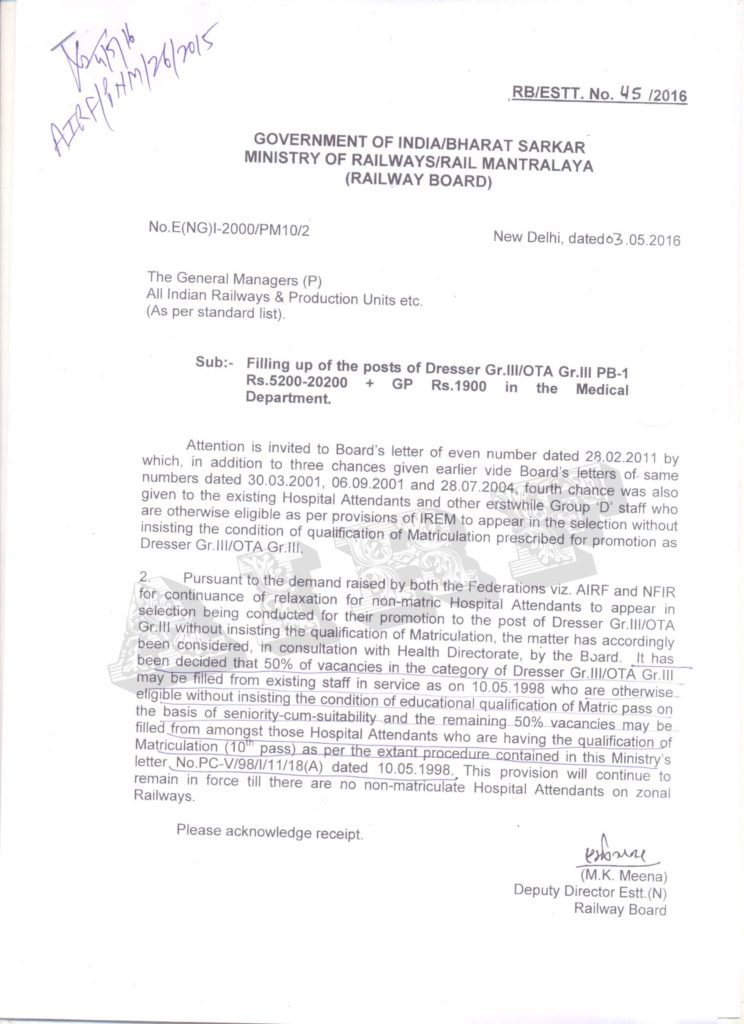