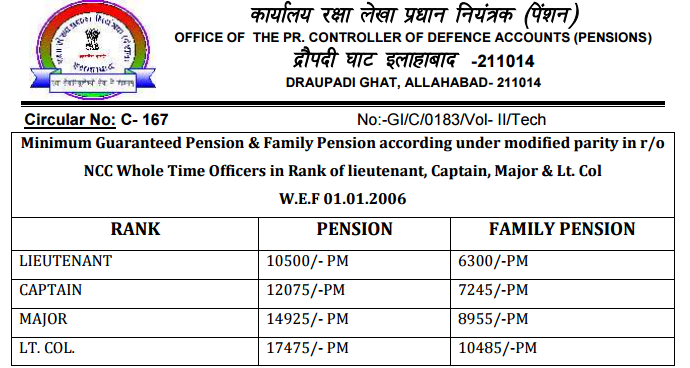 Attention of all Pension Disbursing Authorities is invited to above cited circulars wherein instructions had been issued for implementation of GOI, Ministry of P,PG and pensions, Deptt of P&PW OM No.38/37/08-P&PW(A,) dated 28.01.2013 circulated under this office circular no. 102 dt 11.02.2013. According to these orders, revised pension and family pension of pre-2006 pensioners/family pensioners as revised w.e.f. 01-01-2006 in no case would be less than 50% & 30% respectively of the sum of minimum of pay in pay band and the grade pay corresponding to the pre- revised pay scale from which the pensioner had retired, as arrived at with reference to the fitment tables annexed to the Min of Fin, Deptt of Expenditure OM No. 1/1/2008 – IC dated 30-08-2008. In case of HAG and above scales, this will be 50% & 30% of the minimum of the pay in the revised pay scale arrived at with reference to the fitment tables annexed to the above referred OM dated 30-08-2008 of Ministry of Finance, Department of Expenditure.
(2) For this purpose, a revised concordance table of the pre – 1996, pre-2006 and post 2006 pay scales/pay bands indicating the pension/family pension (at ordinary rates) payable under the above provisions was enclosed with ibid Govt. OM dt. 28.01.2013 to facilitate payment of revised pension/family pension.
(3) However, it was not possible to give the benefits of revised pension under Govt. O.M. dated 28.01.2013 in absence of VIth CPC pay scale applicable to NCC Whole Time(Male) Officers. Now it has been confirmed that the pay scales as notified for NCC Whole Time Lady Officers for the rank of lieutenant, Captain, Major & Lt. Col under MOD letter No.10515/CPC/DGNCC/Pers(C)/1001/D (GS-IV)/2009 dated 27th July’ 2009 shall be taken into consideration for revision of pension of Pre-2006 retirees NCC Whole Time Officers (Male) of the corresponding ranks. Hence, attention of all pension disbursing authorities is again invited that in case of pre-2006 pensioners who retired as NCC Whole Time Officers in rank of lieutenant, Captain, Major & Lt. Col, their revised pension/family pension as on 01.01.2006 would not be less than as tabulated below:-
(4) In case the consolidated pension/family pension calculated as per Para 4.1 of OM No.38/37/08-P&PW (A) dated 01-09-2008 is higher than the pension/family pension tabulated above, the same ( higher consolidated pension/family pension ) will continue to be treated as basic pension/family pension.
(5) All other conditions as given in OM No. 38/37/08-P&PW (A) dated 1.9.2008, as amended from time to time shall remain unchanged.
(6) All pension disbursing authorities are therefore, requested to revise the pension/family pension in affected cases in terms of ibid circular. Payment made w.e.f. 01.01.2006 will be adjusted against the arrears now being paid and these cases may be reflected in the monthly account sent to this office as ‘change item’.
(7) Where the PDAs are in doubt in regulating the payment of revised pension/family pension under these orders, the cases with full details of pensioner/family pensioners and PPO No: etc may be referred to Audit Section of this office for advice and further action.
sd/-
(Rajeev Ranjan Kumar)
Dy. CDA (P)