3rd Pay Revision of Board level and below Board level Executives and Non-Unionised Supervisors of CPSEs W.E.F 01/01/2017 decision on allowances other

7th CPC Pay Fixation: Guidelines for fixation of pay of candidates working in PSU recommended for appointment by the Commission by method of recruitment by selection
CPSE: Payment of DA w.e.f. 1st April, 2013 to Board level/below Board level executives and non-unionized supervisors following IDA scales of pay on 1987 and 1992 basis.
CPSE DA from 01.10.2014 @ 98.1% payable to the executives and non-unionized supervisors of CPSES (2007 pay revision)
3rd Pay Revision of Board level and below Board level Executives and Non-Unionised Supervisors of CPSEs W.E.F 01/01/2017 decision on allowances other than the allowances under ‘Cafeteria approach’
No. W -02/0028/2017-DPE (WC)-GL-XIV/17
Government of India
Ministry of Heavy Industries and Public Enterprises
Department of Public Enterprises
Public Enterprises Bhawan
Block No. 14, C. G. O. Complex,
Lodhi Road, New Delhi-110003
Dated: 4th August, 2017
OFFICE MEMORANDUM

Subject:-Pay Revision of Board level and below Board level Executives and Non-Unionised Supervisors of Central Public Sector Enterprises (CPSEs) w.e.f. 01.01.2017-decision on allowances other than the allowances under ‘Cafeteria approach’

The undersigned is directed to refer to para 8 and 10 of this department’s O.M.No.W-02/0028/2017-DPE (WC) dated 3rd August, 2017 regarding the issue of separate guidelines in respect of allowances mentioned therein. After due consideration, the Government has decided as follows:
(1) House Rent Allowance:
(i) The house rent allowance to the employees of CPSEs will be at the following rates.
(ii) The rates of HRA will be revised to 27% 18% & 9% for X, Y and Z class cities respectively when IDA crosses 25% and further revised to 30% 20% and 10% when IDA crosses 50%.
2) Leased accommodation:
(i) The Board of Directors may decide on the grade-wise lease rental ceilings in a standardized manner for the different level of executives. The amount of lease rental ceilings should be decided on its merit keeping in view / linkage to the HRA amount, classification of cities for HRA purpose, pay-scales of the executives, House Rent Recovery (HRR) rate, etc.
(ii) If an executive is staying in his/her own house then normally he or she should be entitled to the HRA amount but if the said house is taken as lease accommodation for self-occupation purpose, the lease rental ceilings (after adjusting the HRR amount) should not exceed the net applicable HRA amount.
(iii) The HRR in respect of leased accommodation should be at the following rate, or the actual rent, whichever is lower:-
(iv) For accommodation arranged by CPSE in its own township, the  HRR shall be 7.5% of BP (for X-class cities) / 5% of BP (for Y-class cities) / 2.5% of BP (for Z-class cities), or standard rent fixed by CPSE, whichever is lower.
(3) Other Allowances/Perks: The following allowances will be outside the purview of Ceiling of 35% of Basic Pay under ‘Cafeteria Approach’:
(a) Work based Hardship Duty Allowances : The payment of work based hardship duty allowance upto 12% of Basic Pay shall be admissible for the period the executives / non-unionized supervisors has actually performed one of the following hardship duty:-
i) For performing duty in Underground mines, and
ii) For performing duty at Offshore exploration site
(b) Separate guidelines regarding Location based Compensatory Allowance and Non-Practicing Allowance would be issued later.
2 The additional financial impact in the year of implementing the revised pay-package for Board level executives, Below Board level executives and Non-Unionized Supervisors, as mentioned in para 3 of the DPE O.M. No.W-02/0028/2017-DPE(WC) dated 3rd August, 2017, would be calculated taking into account the OM No. W-02/0028/2017-DPE(WC) dated 3rd August, 2017 and OMs issued on payment of allowances.
3 The allowances specified in this O.M. would be effective from the date of issue presidential directive.
(Rajesh Kumar Chaudhry)
Joint Secretary to the Government of India 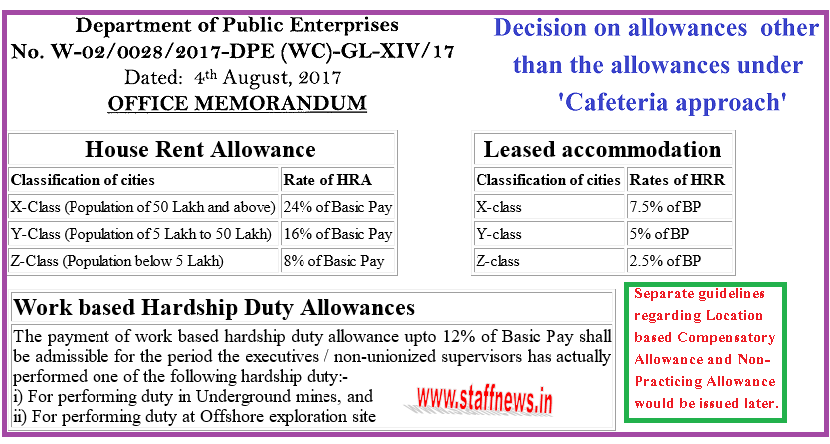