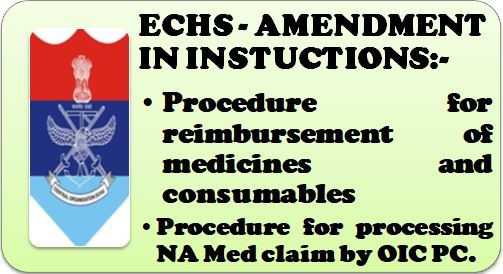 ECHS – Documents required for reimbursement of medicines and consumables

ECHS – Document required for reimbursement of medicines and consumables

AMENDMENT TO EXECUTIVE INSTRUCTIONS : PROCEDURE FOR RE-IMBURSEMENT OF MEDICINES AND CONSUMBALES TO ECHS BENEFICIARIES

1. Ref Central Org ECHS letter No B/49762/AG/ECHS/Medicine Policy dt 08 Apr 2019. Fwg amendments are being done to simplify the reimbursement procedure based on feedback from envt.

2. The fwg docu will be required for reimbursement of medicines and consumables:-

(b) The bill for medicines purchased by the ESM should be in the name of ECHS beneficiary as given in ECHS card.

(c) A cancelled cheque/photocopy of the same to be submitted, if the ESM is claiming the bill for the first time. The same is not required subsequently. The onus of ensuring correct bank details will rest with the ESM.

3. Vitamins and supplements (incl adult diapers) to be included in prescription slip ONLY if they are prescribed for some ailment/disease as primary treatment.

4. The veterans are allowed to submit a consolidated bill for the complete duration of NA (each NA will however not exceed 15/30 days as specified under gen/special condition).

5. Balance documents such as copy of ECHS card, NA certificate with signature of three officers, individual contingent bill, revenue stamp and file cover etc will be done away with.

(a) OIC PC to prepare a consolidated Contingent Bill once every fortnight & fwd it to RC after digitally signing the same (by OIC & OIC ECHS Cell) via email or submitting on hard copy.

(b) Hard copies of bills of all claims mentioned in the contingent bill to be submitted to the RC by the 30th of every month to enable processing for audit.

7. These amendments shall come to effect forthwith and pending bills will also be governed by this procedure. This has the approval of MD, CO ECHS.