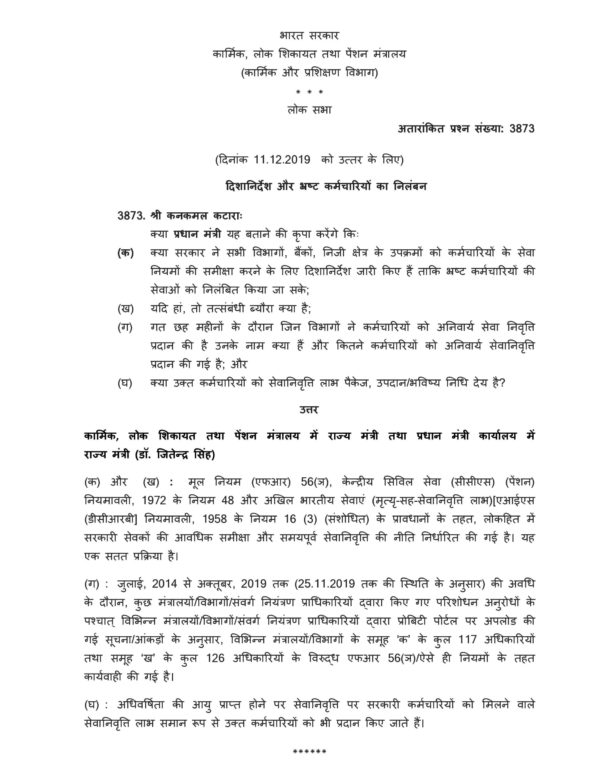 (a) & (b)  The provisions under Fundamental Rules (FR) 56(j), Rule 48 of Central Civil Services (CCS) (Pension) Rules, 1972 and Rule 16(3) (Amended) of All India Services (Death- cum-Retirement Benefits) [AIS (DCRB)] Rules, 1958 have laid down the policy of periodic review and premature retirement of Government servants in public interest. This is a continuous process.

(d)  The same retirement benefits are admissible to these persons as applicable to Government employees upon retirement on normal age of superannuation.

The above statement was submitted by Ministry of Personnel, Public Grievances and Pensions Department of Personnel & Training of undermentioned Lok Sabha Question:-

GOVERNMENT OF INDIA
MINISTRY OF PERSONNEL, PUBLIC GRIEVANCES AND PENSIONS

GUIDELINES AND TERMINATION OF CORRUPT EMPLOYEES

Will the PRIME MINISTER be pleased to state:

(a) whether the Government has issued guidelines to all the departments, banks, public sector undertakings to review the service rules of the employees so as to terminate the services of corrupt employees;

(c) the names of the departments along with the number of employees who have been given compulsory retirement during the last six months; and

(d) whether the retirement benefits package, gratuity/PF, etc. are payable to such employees?

MINISTER OF STATE IN THE MINISTRY OF PERSONNEL, PUBLIC GRIEVANCES AND PENSIONS

AND MINISTER OF STATE IN THE PRIME MINISTER’S OFFICE 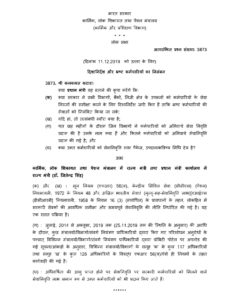 Loading...
Newer Post
Vacant Posts in Railways – Employees retiring in 2019-20 and 2020-21 are approximately 47,000 and 41,000
Older Post
Revised and updated RBI Master Circular on Disbursement of Govt. Pension by Agency Banks