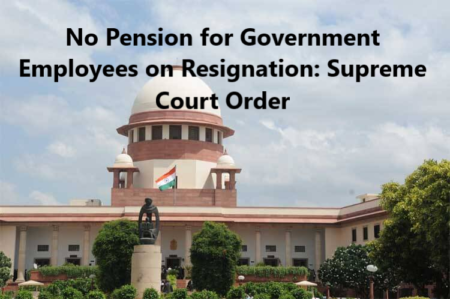 No Pension for Government Employees on Resignation: Supreme Court Order

No Pension for Government Employees on Resignation: Supreme Court Order

IN THE SUPREME COURT OF INDIA CIVIL APPELLATE JURISDICTION

1. By its order dated 26 May 2017 a Division Bench of the High Court of Delhi upheld the judgement of a Single Judge dated 21 March 2017 granting pensionary benefits to the first respondent. The judgement of the Single Judge directed the appellant to pay pensionary benefits to the first respondent on the ground that he had completed twenty years of service and had „voluntarily retired‟ and not „resigned‟ from service. The appellant challenges these findings in the present appeal.

4. In Asger Ibrahim Amin, the appellant had resigned in 1991 after completing twenty-three years of service with the Life Insurance Corporation of India. When the appellant resigned, there existed no provision allowing for voluntary retirement. The Central Government subsequently promulgated the Life Insurance Corporation of India (Employees) Pension Rules 19952 setting out the conditions to be fulfilled for the grant of pension upon retirement and permitting, for the first time, employees to voluntarily retire after twenty years of service. Under the LIC Pension Rules, pension on retirement was made retrospectively applicable to employees retiring prior to 1995, however, the provisions regarding voluntary retirement were not. The LIC Pension Rules also stipulated that resignation amounted to a forfeiture of past service. In deciding whether the appellant was entitled to pension under the LIC Pension Rules, Justice Vikramajit Sen speaking for a two judge Bench of this Court held:

17. The appellant ought not to have been deprived of pension benefits merely because he styled his termination of service as “resignation” or because there was no provision to retire voluntarily at that time. The commendable objective of the Pension Rules is to extend benefits to a class of people to tide over the crisis and vicissitudes of old age, and if there are some inconsistencies between the statutory provisions and the avowed objective of the statute so as to discriminate between the beneficiaries within the class, the end of justice obligates us to palliate the differences between the two and reconcile them as far as possible. We would be failing in our duty, if we go by the letter and not by the laudatory spirit of statutory provisions and the fundamental rights guaranteed under Article 14 of the Constitution of India.”

“11. … The respondent Corporation has controverted the plea of the appellant that as the relevant date and time viz. 29-1- 1991 there was no alternative for him except to tender his resignation, pointing out that he could not have sought voluntary retirement under Regulation 19(2-A) of the LIC of India (Staff) Regulations, 1960. If that be so, the respondent being a model employer could and should have extended the advantage of these Regulations to the appellant thereby safeguarding his pension entitlement. However, we find no substance in the argument of the respondent since Regulation 19(2-A) was, in fact, notified in the Gazette of India on 16-2-1996, that is, after the pension scheme case into existence with effect from 1-11-1993.

8. The facts in Shree Lal Meena I and Shree Lal Meena II were analogous to those in Asger Ibrahim Amin. The respondent employee had resigned after completing twenty years of service. The court was called upon to determine whether the respondent‟s „resignation‟ amounted to a forfeiture of his past service disentitling him from pension or was in fact „voluntary retirement‟. Justice Dipak Mishra (as the learned Chief Justice then was) speaking for a two judge Bench of this Court in Shree Lal Meena I observed:

“28. … Needless to say, resignation has the effect of termination of an employee. Voluntary retirement though has the effect of termination of an employee yet it has different consequences. In the former case, the ex-employee could not be entitled to pension, whereas in case of voluntary retirement, the latter one, the employee would be entitled to pension depending upon the terms postulated in the regulations or rules or the scheme. Rule 23 of the 1995 Rules specifically provides that on resignation, dismissal, removal, termination or compulsory retirement, the employee shall forfeit past service and he shall not qualify for pensionary benefit. Thus, resignation given under the 1995 Rules would not entitle an employee to get pension.

29. … In Asger Ibrahim Amin, retrospectivity has been given to Rule 31 [Pension on voluntary retirement], and for the said purpose the amendment to the 1960 Regulations, specifically Regulation 19(2-A) has been taken recourse to. In our view, when Rule 31 covers the field of voluntary retirement and does not make it retrospective, there being a real difference between resignation and retirement, it is not seemly to read the amended Regulations to the Rules to make the same retrospective. Therefore, we are unable to concur with the view expressed in Asger Ibrahim Amin.”

9. The court in Shree Lal Meena I took the view that the provision with respect to pension on voluntary retirement (Rule 31) was not applicable retrospectively because the relevant provision had not been enacted with retrospective effect. Crucially, the Court noted that by making the provision on voluntary retirement applicable retrospectively, and making a determination in the facts of each case whether an employee had „resigned‟ or „voluntarily retired‟, the decision in Asger Ibrahim Amin obliterated the distinction between resignation and retirement. The court noted that there is a “real difference between resignation and retirement”. They cannot be used interchangeably, and the court cannot substitute one for the other merely because the employee has completed the requisite number of years to qualify for voluntary retirement.

10. In Shree Lal Meena II, upholding the interpretation in Shree Lal Meena I, Justice Sanjay Kishan Kaul speaking for the three judge Bench, noted that the retrospective application of the provision on voluntary retirement in the LIC Pension Rules would lead to an absurd result:

“19. What is most material is that the employee in this case had resigned. When the Pension Rules are applicable, and an employee resigns, the consequences are forfeiture of service, under Rule 23 of the Pension Rules. In our view, attempting to apply the Pension Rules to the respondent would be a self-defeating argument. As, suppose, the Pension Rules, were applicable and the employee like the respondent was in service and sought to resign, the entire past service would be forfeited, and consequently, he would not qualify for pensionary benefits. To hold otherwise would imply than an employee resigning during the currency of the Rules would be deprived of pensionary benefits, while an employee who resigns when the Rules were not even in existence, would be given the benefit of these Rules.”

The Court noted that, if the approach followed in Asger Ibrahim Amin was adopted in interpreting the LIC Pension Rules, an employee who resigned after the enactment of the rules would not be entitled to pensionary benefits but an employee who had resigned when the rules were not in force, but had completed the prescribed period of service for voluntary retirement, would be entitled to pensionary benefits. Such an outcome could not be countenanced and would render nugatory the provision which stipulated that upon resignation, past service stood forfeited.

11. The Court in Shree Lal Meena II elucidated the distinction between resignation and voluntary retirement in the following terms:

“22. … [quoting RBI v Cecil Dennis Solomon (2004) 9 SCC 461] In service jurisprudence, the expressions “superannuation”, “voluntary retirement”, “compulsory retirement” and “resignation” convey different connotations. Voluntary retirement and resignation involve voluntary acts on the part of the employee to leave service. Though both involve voluntary acts, they operate differently. One of the basic distinctions is that in case of resignation it can be tendered at any time, but in the case of voluntary retirement, it can only be sought for after rendering the prescribed period of qualifying service. Another fundamental distinction is that in case of the former, normally retiral benefits are denied but in case of the latter, the same is not denied. In case of the former, permission or notice is not mandated, while in the case of the latter, permission of the employer concerned is a requisite condition. Though resignation is a bilateral concept, and becomes effective on acceptance by the competent authority, yet the general rule can be displaced by express provisions to the contrary.”

The above observations highlighted the material distinction between the concept of resignation and voluntary retirement. The Court also observed that while pension schemes do form beneficial legislation in a delegated form, a beneficial construction cannot run contrary to the express terms of the provisions:

“26. There are some observations on the principles of public sectors being model employers and provisions of pension being beneficial legislations (see Asger Ibrahim Amin v LIC). We may, however, note that as per what we have opined aforesaid, the issue cannot be dealt with on a charity principle. When the legislature, in its wisdom, brings forth certain beneficial provisions in the form of Pension Regulations from a particular date and on particular terms and conditions, aspects which are excluded cannot be included in it by implication.”

12. In the present case, the first respondent resigned on 7 July 1990 with effect from 10 July 1990. By resigning, the first respondent submitted himself to the legal consequences that flow from a resignation under the provisions applicable to his service. Rule 26 of the Central Civil Service Pension Rules 19725 states that:

“26. Forfeiture of service on resignation

(1) Resignation from a service or a post, unless it is allowed to be withdrawn in the public interest by the Appointing Authority, entails a forfeiture of past service…”

16. For the above reasons, we accordingly allow the appeal and set aside the impugned order of the High Court of Delhi dated 26 May 2017. There shall be no order as to costs.