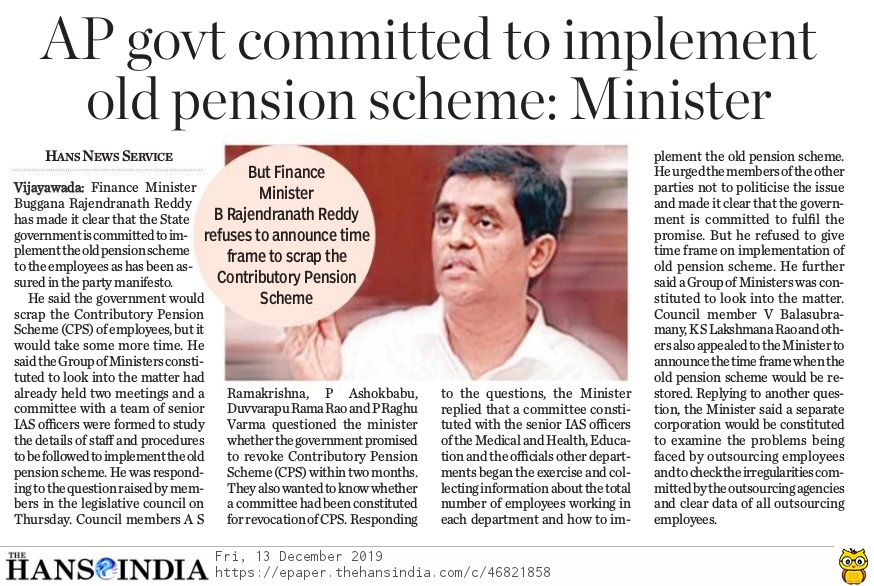 Vijayawada: Finance Minister Buggana Rajendranath Reddy has made it clear that the State government is committed to implement the old pension scheme to the employees as has been assured in the party manifesto.

He said the government would scrap the Contributory Pension Scheme (CPS) of employees, but it would take some more time.

He said the Group of Ministers constituted to look into the matter had already held two meetings and a committee with a team of senior IAS officers were formed to study the details of staff and procedures to be followed to implement the old pension scheme.

He was responding to the question raised by members in the legislative council on Thursday. Council members A S Ramakrishna, P Ashokbabu, Duvvarapu Rama Rao and P Raghu Varma questioned the minister whether the government promised to revoke Contributory Pension Scheme (CPS) within two months.

They also wanted to know whether a committee had been constituted for revocation of CPS. Responding to the questions, the Minister replied that a committee constituted with the senior IAS officers of the Medical and Health, Education and the officials other departments began the exercise and collecting information about the total number of employees working in each department and how to implement the old pension scheme.

He urged the members of the other parties not to politicise the issue and made it clear that the government is committed to fulfil the promise. 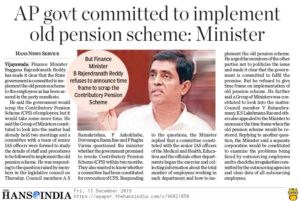 But he refused to give time frame on implementation of old pension scheme. He further said a Group of Ministers was constituted to look into the matter.

Council member V Balasubramany, K S L akshmanaRao and others also appealed to the Minister to announce the time frame when the old pension scheme would be restored.

Read at: The Hans India