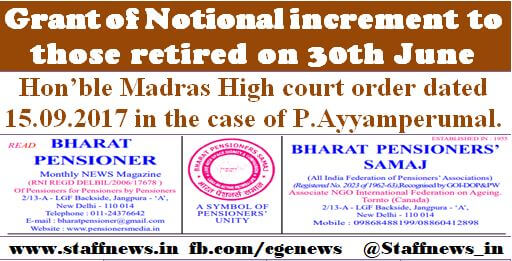 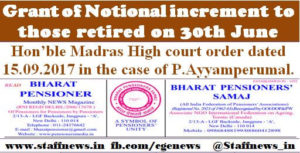 Subject : Grant of Notional increment to those retired on 30th June- Hon’ble Madras High court order dated 15.09.2017 in the case of P.Ayyamperumal.

As is clear from:

Hon’ble Madras High court order dated 15.09.2017 in the case of P.Ayyamperumal has become a law and cannot be said to be in persona as it is a judgement on a status of subject matter of increment which is beneficial to the entire homogenous group of Pensioners.

28. The judgements “in rem” signified as judgements which are good against all mankind and “judgements in personam” signified the judgements which are good only against the individuals who are parties to them and their privies. The point adjudicated upon in a “judgement in rem” is always as to the status of the “res” and is conclusive against the world as to that status, whereas in a judgement “in personam”, the point whatever it may be, which is adjudicated upon, not being as to the status of the “res” is conclusive only between the parties or privies. Reference can be made to Firm of Radhakrishnan Vs. Gangabai, 1928 S 121, Ballantyne vs. Mackinson 1896 2 QB 455.

29. Courts have held that, “Judgement in rem”, operates on a thing or status rather than against the person and binds all persons to the extent of their interest in the thing, whether or not they were parties to the proceedings. The judgement “in rem”,as distinguished from judgement “in personam” is an adjudication of some particular thing or subject matter, which is the subject of controversy, by a competent Tribunal, and having the binding effect of all persons having interests, whether or not joined as parties to the proceedings, in so far as their interests in the “res” are concerned. In determining whether a judgement is “in rem”, the effect of the judgement is to be considered and it is tested by matters of substance, rather than by measure of any particular draft or form.

A final judgement on the merits in a particular proceeding, “in rem” is an absolute bar to subsequent proceedings founded on the same facts and a judgement “in rem” may be pleaded as a bar to another action of the same subject matter, if its effect is to merge a distinct cause of action, but not otherwise. The judgement “in rem” operates as a bar or estoppel only to the “res” or matter within the jurisdiction of the court and does not prevent a subsequent action for personal relief, which could not be obtained in the first action. Thus with respect to the “res or status”, a “judgement in rem” has to be conclusive and binding upon “all the world” that is, on all the persons, who may have or claim any right or interest in the subject matter of litigation, whether or not, they were parties to or participants in the action, at least to the extent, that it adjudicates or establishes a status, title or res, constituting the subject matter of the action, a “judgement in rem” will operate as a estoppel, in a subsequent action in respect of the points or questions adjudicated.”

In short judgement in rem & in Personam can be defined as follows:

Judgment in rem is adjudication pronounced upon the status of a subject matter, person or a thing by a competent court to the world generally.

Judgments in Personam are all the ordinary judgments not affecting the status of any subject matter, any person or anything.

“ When a Citizen is aggrieved by the action of the Government department has approached the court and obtained a declaration of law in his favour, others in like circumstances should be able to rely benefit of this declaration without need to take their grievances to Court”.

Attention is also invited to the following order of Honourable Supreme Court dated 01.09.2017 in Diary No 23663/2017.GOVERNMENT OF NCT OF DELHI & ANR. Petitioner(s) vs SOMVIR RANA (TGT ENG)

“We find that there are several matters in which the aggrieved employees have been going to the Tribunal, then to the High Court and thereafter those matters are brought before this Court at the instance of the Union of India/NCT of Delhi. Once the question, in principle, has been settled, it is only appropriate on the part of the Government of India to issue a Circular so that it will save the time of the Court and the Administrative departments apart from avoiding unnecessary and avoidable expenditure”.

In view of the facts brought out, all the above mentioned judgements including the Central Administrative Tribunal – Delhi order in OA-2943/2017 J. D Gupta vs Govt. Of India Press of 3rd August, 2018 which stand confirmed by the Apex court are judgements in rem and need to be implemented to all similarly placed.

Sir, undersigned very humbly request sympathetic consideration of above facts and to issue suitable implementation orders at an early date..

Thanking you in anticipation