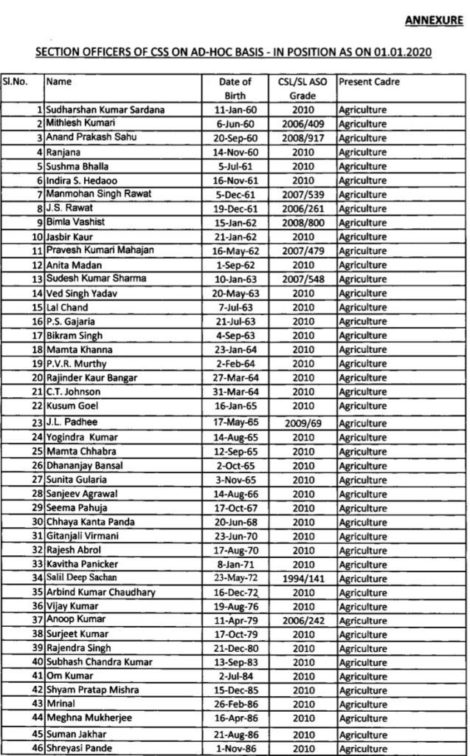 F. No. 6/14/2015-CS.l(S)
Government of India
Ministry of Personnel, Public Grievances and Pension
Department of Personnel and Training

Subject: Extension of Period of Ad-hoc appointment in the grade of Section Officers of CSS­ regarding.

2. As the availability of regular Section Officers may take some more time, it has been decided with the approval of the competent authority to further extend the period of ad-hoc appointment in Section Officers’ Grade of CSS in respect of officers whose names appear in Annexure to this OM beyond 31.12.2019 upto 30.06.2020, subject to the following conditions.

i) The extended period of ad-hoc promotion would be from 01.01.2020 and upto 30.06.2020 or date of superannuation or date of their regular appointment in the grade or till further orders, whichever is earlier.

ii) The extension in the period of ad-hoc promotion shall be subject to vigilance clearance as per DOP&T instructions issued on the subject from time to time. However, the period of ad-hoc promotion of 02 officers i.e. Shri Salil Deep Sachan and Shri Roop Singh, is being done in terms of this Department’ s OM No. 11012/9/86-Estt.(A) dated 24.12.1986. There is, therefore, no need to seek fresh vigilance clearance in respect of these 02 officers. However, it would be further subject to the condition that the disciplinary/vigilance case against these officers has not yet been decided and no penalty bas been imposed on the officers.

iv) Ad-hoc appointment would continue till regular candidates in Section Officer Grade are available either through Seniority Quota or Limited Departmental Competitive Examination (LDCE). In the event of the ad-hoc appointee not qualifying for regular appointment in either of these two categories, they shall be reverted to the ASO grade on availability of such regular officers from the date, the regular Section Officers join duty in their respective cadre units allotted to them by the Department.

v) The officers who have not yet successfully completed the Level B training shall have to attend the same as and when nominated by this Department. Failure to do so may attract administrative action including reversion to their substantive grade i.e. ASO grade.

3. Any discrepancy in the Annexure may be brought to the notice of this Department. If any officer in the list has not yet undergone Level B Mandatory training successfully and does not fall in the exempted category, name(s) of such officer(s) may also be intimated to this Department.

All the cadre authorities
Ministry/Department of ………………….
[Director/ Deputy Secretary (Admn./Estt.)]

Loading...
Newer Post
Finmin OM : Rush of Expenditure Sanctions and Bills must be preferred on PFMS Portal by 15th March 2020
Older Post
BPS – Court Order for Grant of Notional Increment to those Retired on 30th June