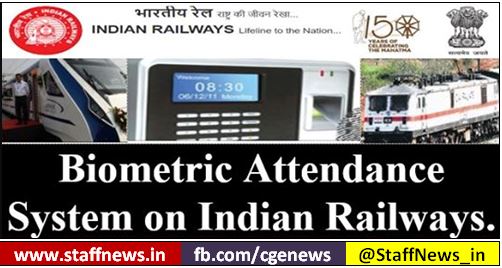 System” (AEBAS) on Indian Railways. In terms of these instructions, in the first phase, the staff working in the Zonal Headquarters Office, Administrative office of Production Units, RDSO/Lucknow, Metro Rail/Kolkata, CORE/Allahabad and Divisional Headquarter offices which do not fall under the shift duty roster were to be covered.

2. In terms of the Board’s letter No. E(G)2017/LE 1-34 dated 03.11.2017, instructions were issued that the AEBAS should. be implemented in all the offices of the Railways including PUs, attached and subordinate offices etc. by 31st January, 2018. AEBAS should be integrated and implemented in such a way that status of biometric machines and attendance at divisional/Unit level should be accessible by DRM office. Similarly, all DRM offices be integrated with Zonal Railways and all the Zonal Railways with Railway Board so that monitoring of attendance of any location can be done by Railway Board. CCTV cameras should also be provided with the Biometric machine in similar fashion.