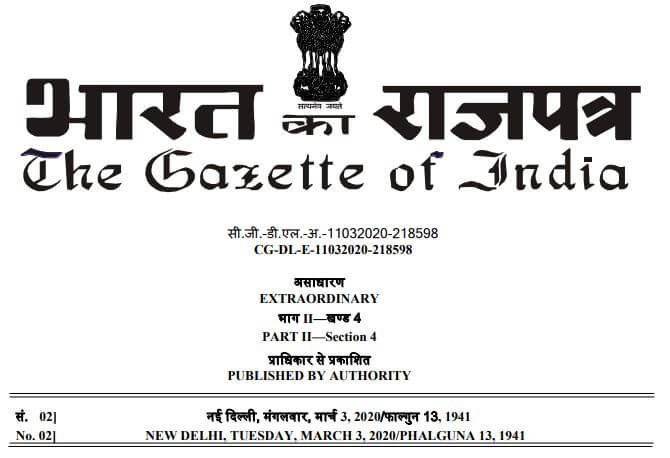 MoD Notification – Cantonment Board Account Rules, 2020 to all cantonments in India wef 01 Apr 2020

S.R.O.2(E).—Whereas the draft of the Cantonment Board Account Rules, 2017, which the Central Government proposes to make, in exercise of the powers conferred by section 346 read with section 125 of the Cantonments Act, 2006 (41 of 2006), was published as required under sub section (1) of section 346 of the said Act in notification of the Government of India in the Ministry of Defence vide S.R.O. 28(E), dated the 17th August, 2017 in Gazette of India, Extraordinary Part – II, section 4, inviting objections and suggestions from all persons likely to be affected thereby till the expiry of forty five days from the date of publication of the said notification;

And whereas, objections and suggestions received in respect of the said draft rules have been considered by the Central Government;

Now, therefore, in exercise of the powers conferred by section 346 read with 125 of the Cantonment Act, 2006 (41 of 2006) and in supersession of the Cantonment Account Code, 1924, except as respects things done or omitted to be done before such suppression, the Central Government hereby makes the following rules relating to the Cantonment Board Account, namely:-

1. Short title, extent and commencement.–(1) These rules may be called the Cantonment Board Account Rules, 2020.

(2) They shall extend to all cantonments in India.

2. Definitions.– (1)In these rules, unless the context requires otherwise,–

(b) “Accounting Software System” means the software utilized for the preparation and maintenance of accounting records under the double entry based accrual method of accounting and which has been made available or recommended as specified in sub-rule (4) of rule (7);

(c) “accrual” means recognition of revenues and expenses as they are earned or incurred (and not as money is received or paid) and includes recognition of transactions relating to assets and liabilities as they occur irrespective of the actual receipts or payments;

(d) “Accrual Basis of Accounting” is the method of accounting whereby revenues and expenses are identified with specific periods of time, such as a month or year, and are recorded as earned or incurred, alongwith acquired assets, without regard to the date of receipt or payment of cash, as distinguished from cash basis;

(e) “Appendix” means an Appendix appended to these rules;

(g) “authorized officer” means the Chief Executive Officer or any other officer of the Board authorized by him in writing to perform any act or duty under these rules;

(i) “cantonment fund” means a general operating fund of a Board as referred to in sub-section (1) of section 119 of the Act which is used to account for all financial resources of the Board, except the cantonment development fund or any special or trust funds as provided in the Act, which comprises the net balance of the assets of the entity after deducting all its liabilities;

(j) “cantonment development fund” means the mandatory special fund referred to in sub-section (2) of section 119 of the Act;

(k) “cashier” means any employee of the Board working in the Accounts Department entrusted with the task of receiving cash or cheques or making disbursements or payments at any office of the Board, where books and records are maintained: Provided that where there is more than one such person, the person so designated or the person to whom such duties have been entrusted by the Chief Executive Officer shall be the cashier;

(m) “Form” means a Form annexed in Schedule VI to these rules;

(n) “Head of Accounts” shall mean the head of accounts department;

(o) “Head of Department” means an officer placed in charge of a department of the Board;

(p) “original works” means public works undertaken for all new constructions, and includes special repairs to newly purchased or previously abandoned buildings or structures, which are required for bringing them into use or which result in an increase in future benefits flowing from the asset;

(q) “maintenance works” means the works other than original works;

(r) “President” means the President of a Board;

(t) “re-appropriation” means the transfer of funds from one budget head to another;

(u) “suspense account” means the head of account under which transaction of a temporary character which are not to be adjusted forthwith in the accounts as final receipts or outlay or the correct classification of which cannot be determined, are recorded;

(v) “temporary establishment” means an establishment employed for a limited period on a definite rate of pay and paid on a monthly basis and does not include daily labour or outsourced personnel.

3. Effect of close holidays.–Whenever in these rules, any action or proceeding is directed or allowed to be done on a certain day or within a specified period, then, if the office is closed on that day or on the last day of the specified period, the action or proceeding shall be deemed to have been done in due time, if it is done on the next working day.

Provided that such rounding off shall not apply to any receipt of revenue by the Board or demands against the Board which are fixed by or under any law for the time being in force:

Provided further that where applicable, the rounding off of the fraction of a rupee shall be done only in respect of the net amount payable or receivable on a bill and not in respect of the individual items of claims or adjustments in bill.

(2) The balance arising upon all such amounts rounded off as per sub-rule (1), shall be transferred to a ledger account in the Accounting Software System.

7. Manner of maintaining accounts.–(1)All money transactions to which any member of a Board or any officer or employee of the Board is a party in his official capacity, shall, immediately and without exception, be brought to account in the books of the Board and all monies received, other than monies withdrawn from the bank to meet current expenditure, shall without delay be deposited into the bank and shall be credited to the appropriate account and shall not be utilized to meet current expenditure of the Board.

(2) All transactions of the Board shall be identified with funds, and separate accounting records maintained for each such fund in the manner specified in rules 11 and 12.

(3) Every Board shall maintain its books of account using the double entry system of accounting and all accounts shall be maintained as per the accrual method of accrual basis of accounting.

(4) The accounts shall be maintained, as far as may be, on computers using the Accounting Software System made available or recommended by the Director General.

(5) The Chief Executive Officer shall be responsible to ensure that all the accounting and financial data are available in a manner prescribed by these rules.

(6) If for any reason the computer system or the Accounting Software System on which the accounts are to be maintained is non-functional or is unable to give the output as prescribed in these rules, the Chief Executive Officer shall make arrangements to manually maintain the requisite records for such time as is considered necessary.

8. Corrections in accounts.–(1)The deletion or modification of entries already authorized and passed shall not be permitted and in the event of any error being noticed, the same shall be rectified by passing rectification or reversal entry through a journal voucher entry authorized by the Head of Accounts.

(2) All rectification or reversal entries shall be dated only as per the date of the authorization of such entry: Provided that –

(b) if the financial year in regard to which such correction is being made is over and the financial statements for the said year have been finalized and the accounts for the year closed then the rectification, reversal, transfer entries or adjustments shall be made in the accounts of the subsequent years in which the error is noticed by clearly identifying such entry as a prior period entry.