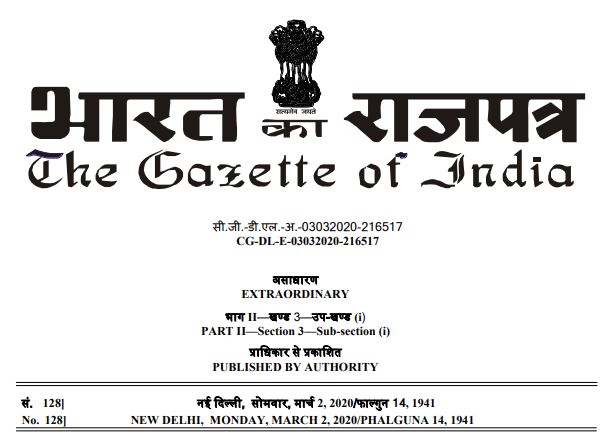 MINISTRY OF PERSONNEL, PUBLIC GRIEVANCES AND PENSIONS
Department of Personnel and Training

2. Definition. – In these Rules, unless the context otherwise requires –

(a) “Act” means the Lokpal and Lokayuktas Act, 2013 (1 of 2014);
(b) “offence” means an offence punishable under the Prevention of Corruption Act, 1988 (49 of 1988);
(c) words and expressions used and not defined in these rules, but defined under the Act shall have the same meaning as respectively assigned to them under the Act.

3. Form and manner of complaint. – (1) For the purposes of clause (e) of sub-section (1) of section 2 of the Act, a complaint shall be filed in the form appended to these rules as Annexure.

(2) A complaint shall be filed in any of the following manner, namely: –

Provided that where the complaint is filed electronically, the hard copy thereof shall be required to be submitted to the Lokpal within a period of fifteen days from the date of filing:

Provided further that the Lokpal shall not keep the said complaint, received electronically, as pending, if the same is complete in all respects.

(3) A complaint shall contain the details of allegations about commission of an offence committed by the public servant:

(4) A complaint may ordinarily be made in English:

Provided that the Lokpal may also entertain a complaint in any of the languages referred to in the Eighth Schedule to the Constitution.

(5) The following shall be required to be annexed with the complaint, namely: –

(8) The Lokpal may seek such other information or affidavit relating to a complaint, as it deems fit.

4. Handling form(s) of complaint. – The Lokpal may process a complaint in the following manner, namely:-

(a) protect the identity of the complainant or the public servant complained against till the conclusion of the inquiry or investigation:

Provided that the protection, shall not be applicable, in cases where the complainant himself has revealed his identity to any other office or authority while making a complaint to the Lokpal;

(b) protect the integrity of the process of inquiry or investigation;

(c) dispose of the complaints, in limine, under the following conditions, namely:-

(d) the Lokpal shall dispose of the complaints satisfying the conditions as contained in clause (c) above within a period of thirty days.