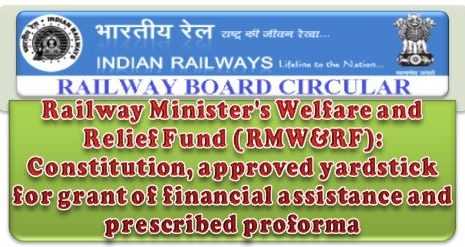 As you are aware, Railway Minister’s Welfare & Relief Fund has been constituted since long for providing financial assistance to Railway servants and their families in distress, such as arising from natural calamities, prolonged illness, sudden death etc., in deserving cases. A copy the Constitution of the RMW&RF (Annexure-A) and approved yardstick for grant of financial assistance (Annexure­ B) are enclosed.

2. In view of the fact, that the officers and staff in the Railways may not be completely aware of the provisions for financial relief available in the Fund, it is requested to give wide publicity to the Scheme by deputing Welfare Inspectors and to recommend deserving cases in the prescribed proforma (Annexure-C).

3. Suggestions, if any, to enhance the usefulness of the Fund may also be sent to the undersigned.

1. The Fund shall be known as the Railway Minister’s Welfare & Relief Fund for Railway Servants and their families. The Minister for Railways will be patron­ in-chief of the same.

(i) Voluntary donations by Railway Servants;
(ii) Donations made by other individuals, institutions or organizations etc.;
(iii) Proceeds from special charity shows such as dramas, cinema shows, fetes, games etc.;
(iv) Collections voluntarily made on special occasions as during Railway Week.

3. The objectives of the Fund are:-

4. The day-to-day management of the Fund shall be administered by a Committee consisting of :-

The State Bank of India shall be the banker. All Cheques for disbursement shall be signed jointly by the Treasurer and the Secretary.

A monthly statement of accounts shall be prepared by the Secretary and Treasurer and put up to the Committee and the Railway Minister periodically.

The accounts of the Ftmd shall be audited armually by an Auditor appointed by the Committee.

8. The Managing Committee may invest the proceeds of the Fund:-

(i) In the State Bank of India or such other Nationalized Banks as the Committee may decide; and
(ii) In fixed deposits with Government Companies as defined in the Companies Act.

Other terms and conditions of the Scheme are as follows:

.(i) All cases for assistance from the Fund should be sponsored by the Railway Administration concerned, together with their recommendations in the prescribed form (Annexure-C) along with a certificate from the Railway Medical Authorities as considered necessary;

(ii) The Railway Administrations should ensure that the amount sanctioned by the Managing Committee of the Fund is given to the employee or (where deceased) his/her dependents concerned, with utmost expediency and utilization certificate for the amount received from the employee/dependent, as the case may be, is furnished to the Board;

(iii) No financial assistance shall be given to retired Railway employees.

(iv) The claim for financial assistance should ideally be preferred by the family of deceased employees within one year from the date of death of the employee.
(v) No part of the F1md can be given to a non-Railway person or body.

(vi) Cases, where financial assistance beyond the prescribed monetary ceiling limits is justified and warranted, will be submitted to Minister of Railways with the recommendations of the Committee for his approval.

(I) All cases are to be sponsored by the Railway Administration concerned.
(II) Enclose photocopy each of the bills, in cases where expenditure has been incurred for treatment.
(III) No columns should be left unfilled.
(IV) Do not send cases seeking assistance for purchase of motorised tri-cycle by handicapped employees. Such cases should be considered by Railway for grant of self loan as per extant provisions

Loading...
Newer Post
Group A and Group B–Safety Discipline Posts Recruitment Rules, 2020 in the Directorate General, Factory Advice Service and Labour Institutes
Older Post
Attendance of Central Government officials due to COVID-19: Latest DoPT OM dated 07.10.2020 with staggered timing from 9 am to 5.30 pm and 10 am to 6.30 pm