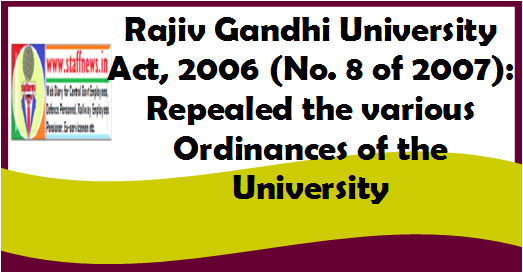 Rajiv Gandhi University Act, 2006 (No. 8 of 2007): Repealed the various Ordinances of the University

Rajiv Gandhi University Act, 2006 (No. 8 of 2007): Repealed the various Ordinances of the University

No. F. RGU/ADM-38/0RD/10 – It is hereby notified for information of all concerned that the Executive Council of the Rajiv Gandhi University, in exercise of powers vested in it under Section 31(2) read with Statute 41 of Rajiv Gandhi University Act, 2006 (No. 8 of 2007), has repealed the following Ordinances of the University as notified earlier and published in Gazette No. 238 dated June 14, 2017: