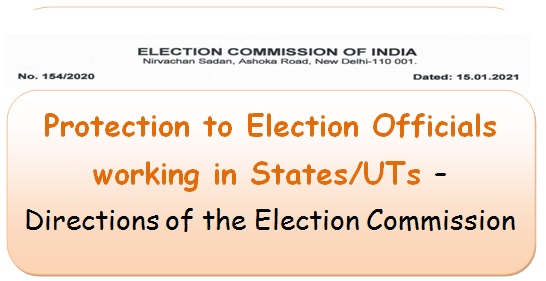 Cabinet Secretary, Government of India
Chief Secretaries of all States & UTs
Secretary to the Govt. of India, Department of Personnel & Training
Chief Electoral Officers of all States/UTs

Sub: Directions of the Commission regarding protection to Election Officials working in States/UTs-reg.

Election Commission, under Article 324 of the Constitution, is vested with the power of superintendence, direction and control of the preparation of the electoral rolls for, and the conduct of, all elections to Parliament and to the Legislature of every State and of elections to the offices of President and Vice-President in the country.

4. The Commission has noted some incidents of victimizations of Chief Electoral Officers, Addl./Joint/Deputy/Assistant Chief Electoral Officer in the post-election period. Many a times they are targeted for political vendetta by charging them with disciplinary cases on flimsy grounds for their earlier tenures in the state government after the completion of their tenure. An environment of fear is created to convey that the upright, steadfast and sincere officers can be taken to task at any time, on the flimsiest of the grounds.

5. In such a scenario, these officers are not only demotivated but also their morale is greatly reduced, which severely affect their efforts to ensure free and fair elections. Left to go on unfettered, it causes a situation where officials are reluctant to join as Chief Electoral Officers and those who are inducted face the uncertainty of fair treatment in post-election phase.

6. The matter of taking action against any officer on election duty was subjected to the scrutiny of the Hon’ble Supreme Court of India for a long time. Hon’ble Court by its order dated 21.09.2000 in writ petition (C) No. 606 of 1993 (Election Commission of India Vs. Union of India and Others) upheld that neither any action can be initiated against the officers on Election duty by the State Government nor can the government refuse to act on its advice to initiate action against errant officials. Consequent to the decision of the Apex Court, Department of Personnel & Training has also issued instructions accordingly establishing the disciplinary control the Election Commission over officials deputed for election duties, vide Deptt. Of Personnel & Training OM No. 11012/7/98-Estt. (A), dated 7th November, 2000. This has been further reiterated and clarified vide DOPT O.M. No.11012(4)/2008-Estt. (A), dated 20 March, 2008, and O.M. No. 11012(4)/2008-Estt. (A) Dated the 28th July, 2008.

7. In view of the above, Election Commission is of considered view that positive protection to election officials from motivated harassment is essential, to enable the electoral Officials in carrying out the electoral functions in free, fair, impartial and fearless manner. Accordingly, the Commission has directed as under: –

(ii) The State/UT government shall not reduce facilities such as vehicle, security and other facilities/amenities provided to the office of the Chief Electoral Officer for proper discharge of his/her duties.

8. Commission is sanguine in the expectation that all concerned shall strictly adhere to this regimen in letter as well as in spirit.

Loading...
Newer Post
Delegation of Power for framing/amending the Recruitment Rules­ – Railway Board
Older Post
Vaccination of frontline staff of Railway Department on first priority: NFIR Writes to Railway Board