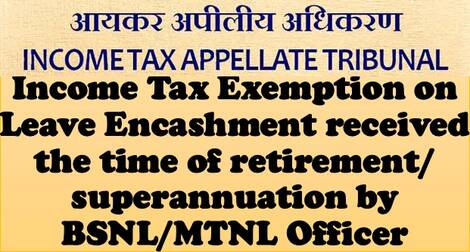 2. At the outset, the learned Counsel for the assessee stated that there is delay in filing of this appeal by 129 days and qua that assessee has filed condonation petition supported by affidavit of the chartered accountant of the assessee Shri Srinivasraghavan Srivatsan, wherein he contended that the delay was on account of his advice not to file the appeal and the relevant Para 7 to 9 read as under: –

“7. At that point in time, I did not foresee any chances of further relief before higher appellant authority in the case and therefore I suggested him not to file appeal before Hon’ble ITAT.

8. Consequently, no appeal was filed by him before Hon’ble Tribunal.

9. Thereafter, after a lapse of 129 days, he filed appeal based on advice of another Chartered Accountant.”

3. I find that the CIT(A) passed the order on 25.10.2017, which was received by the assessee on 08.11.2017. The appeal before Tribunal was filed on 16.05.2018 and thereby there is a delay of 129 days. The assessee is retired pensioner from Department of Telecommunications (DOT) Government of India and a senior citizen. In this appeal only the issue was whether the assessee is entitled for exemption of leave encashment of the full amount or restricted to 3 lacs. The CIT(A) restricted the exemption at ₹ 3 lac and appeal of assessee was dismissed for which the CA of the assessee Mr. Srinivasraghavan Srivatsan advised him not to file any appeal.

4. I find that no malafide can be attributed to the assessee for late filling of this appeal or assessee will not get any benefit for not filing or late filling of this appeal. I find that the assessee under bonafide belief acted on the advice of the chartered accountant and has not filed the appeal. Subsequently, he was advised from by another Counsel, who advised him of filing of appeal and accordingly, the appeal was filed belatedly by 129 days. I find the cause as reasonable and hence, condone the delay.

5. The only issue in this appeal of assessee is against the order of CIT(A) denying exemption under section 10(10AA)(i) of the Act in respect of leave encashment received at the time of retirement during the relevant FY 2013-14 relevant to AY 2014-15. For this assessee has raised the following ground: –

“1. the learned commissioner of Income Tax (Appeals) erred in confirming the order of Learned Assessing Officer in denying exemption under section 10(10AA) to the tune of ₹ 723005/- while assessing total income of the appellant, out of the total amount of Rs. 1023005/-, being leave Encashment received at the time of Retirement during the relevant assessment year.

Appellant submits that in view of the facts and circumstances of the case as well as in law denial of exemption under section 10(10AA) of the Act to the tune of ₹ 723005/- is bad in law and deserves to be deleted.”

6. Briefly stated facts are that the assessee was appointed Junior Engineer with the Indian Post and Telegraph Department, Bombay Telephone Exchange vide appointment letter dated 24.04.1980. Subsequently, the Government of India had issued a declaration and order of appointment under rule 3 and 4 of the Central Civil Services (Temporary Service) Rules 1965 dated 22nd June 1983 to the effect that the appellant on being found suitable to be appointed in a quasi- permanent capacity under the Government of India Department of Telecommunications in the post of Junior Engineer with effect from 22nd June 1983 and is appointed as Junior Engineer in a quasi-permanent capacity to the said post with effect from the said order vide letter dated 22nd June 1983. Subsequently, the government of India, Ministry of Communication and IT, Department of Telecommunications vide their order dated 19th January 2004 had permanently absorbed the assessee, in Mahanagar Telephone Nigam Ltd, a Government of India undertaking with effect from 01.10.2000 in accordance with the provisions of Rule 37-A of CCs (Pension) Rules as amended form time to time and sanction of the President of India. The assessee was permanently appointed in Mahanagar Telephone Nigam Limited, Govt. of India undertaking which forms part of and is governed under Department of Telecommunications, Govt. of India, although, MTNL is a PSU. The assessee has earned leave at the credit of the assessee at the time of absorption of the assessee on 19.01.2004 at 263 and half pay leave at 395 days. The number of days of leave as on the date of absorption brought forward from Govt. of India, Ministry of Telecommunications and IT, Department of Telecommunications was at 263 and further an earned leave of 37 days was available from MTNL at the time of retirement. This fact has been communicated to the assessee vide letter No. DM(W)W1/PENSION CASE/76729/2017-18 dated 27/11/2017, wherein in the chart the MTNL has certified as under: –

And also find that the Govt. of India, Ministry of Communication and IT, Department of Telecommunications vide reference No. DIR(Estt)/MTNL Absorption/TES Gr. B/Mumbai/03-04 dated 19.01.2004 has permanently absorbed the assessee in MTNL and the earned leave stand transferred to MTNL vide Para 6 and this is admitted as under: –

“6. Leave:- The earned leave and Half Pay leave at the credit of Shri/Smt./Kumar Patel B B stands transferred to MTNL on the date of absorption as provided for under sub-rule 24(b) of Rule 37a of CCS (pension) Rules.”

“3. The issue has been examined, considering the fact that the explanation below sub rule-8 under Rule 37A of CCS (pension) Rules, 1972 categorically provide for calculation of pension to the above absorbed employees on superannuation from the PSU/Autonomous Body in the same way as would be the case with a Central Government servant retiring on superannuation on the same day, it is clarified that the above mentioned provision which is part of CCS(Pension) Rules, 1972 shall be applicable in the case of all the DoT absorbees who are entitled for pension under Govt. Of India Rules at the time of their retirement in terms of their absorption package.”

“1. The amount of leave encashment in respect of leave earned during the period before absorption is eligible for full exemption as per Section 10(10AA)(i) of the Income Tax Act, 1961″

2. The amount of leave encashment in respect of leave accrued after absorption will be taxable after giving exemption as per section 10(10AA)(ii) of the Income Tax Act, 1961.”

In lieu of that the assessee of has received a total leave encashment allowances at ₹ 9,09,830/- at the time of his retirement (and not the amount of ₹ 10,23,005/- as noted by AO and CIT(A) in their orders). I find that the assessee has 263 days of earned leave as on the date of absorption from Government Services to MTNL and the balance 37 days is the leave earned from services with MTNL.

9. I have heard the rival contentions and gone through the facts and circumstances of the case. The admitted facts are that the assessee was originally appointed as Junior Engineer with Indian Post and Telegraph Department, Govt. of India w.e.f. 24.04.1980 and thereafter, in permanent capacity as Junior Engineer in the Department of Telecommunications, Govt. of India w.e.f 22.03.1983 vide order dated 22.06.1986. Subsequently, with effect from 01.10.2000 vide order dated 19.01.2004 issued by Department of Telecommunications, Ministry of Communication and IT, Govt. of India, in accordance with the provisions of Rule 37A of CCS(Pension) Rules, permanently absorbed in the Mahanagar Telephone Nigam Limited (MTNL) a PSU undertaking of Govt. of India. I am of the view that the assessee had been in service under the Department of Telecommunication, Govt. of India and his stamps of appointment and pay-scale were governed by the Central Govt. Rules, framed all other such employees working in Govt. of India with effect from 24.04.1980 on adhoc basis and subsequently in permanent capacity vide order dated 22.06.1986 w.e.f 22.03.1983. The assessee was absorbed in MTNL, a Govt. of India Undertaking, w.e.f 01.10.2000 vide order dated 19.01.2004. I am of the view that as per the provisions of section 10(10AA)(i) of the Act, the assessee is entitled for exemption on the amount of leave encashment of leave earned during the period before absorption in MTNL as per section 10(10AA)(i) of the Act as applicable to Central Govt. because before that date he was employee of Govt. of India that the Central Government. The amount of leave encashment in respect of leave accrued after absorption in MTNL will be governed by the exemption as per section 10(10AA)(ii) of the Act. I find that the facts are clearly in favour of assessee and for 263 days of leave as on the date of absorption was available to the assessee, which was earned and unutilized from Government service i.e. Central Government and will be governed by 10(10AA)(i) of the Act. The balance 37 days of leave earned is from MTNL and will be governed as per the provisions of section 10(10AA)(ii) of the Act. Accordingly, I allow the appeal of the assessee and direct the AO to recompute the exemption proportionately as directed above.

10. In the result, the appeal of assessee is allowed. 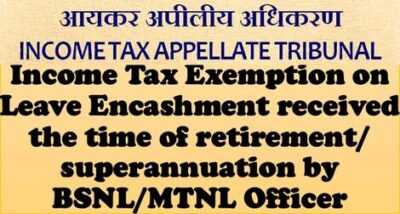