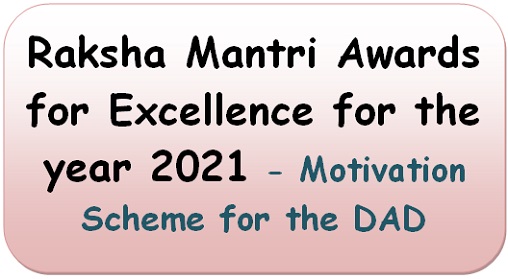 Subject : “Raksha Mantri Awards for Excellence” for the year 2021.

Please find enclosed a detailed “Motivation Scheme for the Defence Accounts Department” for the Year 2021.

2. The process of selecting awardees for the year 2021 at the level of Principal Controllers/Controllers etc. may be completed by 15th June, 2021. For “Raksha Mantri Awards for Excellence” to be decided by the CGDA, the nominations may be forwarded in the prescribed format, both in soft and hard copy form (3 copies) and mailed on the email Id [email protected] latest by 06th July, 2021. Citation/write up of project work done (in not more than 100 words), two passport size photographs, bio data (in not more than 100 words) and a write up in bullet form (in not more than 50 words) in respect of each nominee/team may also be forwarded while forwarding the nominations to HQrs Office. All Principal Controllers/Controllers & equivalents are advised to follow the guidelines laid down in para 2 of HQrs office Circular No. Coord/13005/RMA/Augment dated 03.12.2019, wherein it has been mentioned that MoD (Fin) has emphasized that the selection criterion for award may be “thrust on innovative ideas and out of box action and not routine efficiencies’’.

3. It is further requested that the time schedule prescribed above may be strictly adhered to; failing which, it may not be possible to consider the nominations received after the closing date.

4. The detailed guidelines of the scheme may be given wide publicity and placed on websites etc. The scheme has also been placed on the CGDA’s website at www.cgda.nic.in. The expenditure on the scheme would be booked in the DAD-Pay and Allowances head.

5. For PIFA/IFA offices a separate circular will be issued by IFA wing of HQrs office.

The need for adequately motivating officers and staff at all levels of the Central and State Governments has been engaging the attention of the Government for some time.

Keeping this in view, the Government of India have introduced Prime Minister’s Awards for excellence in Public Administration in order to recognize extraordinary and innovative work done by officers of the Central and State Governments individually, or as a group or as organizations. A similar motivation scheme had been introduced in the DAD to motivate staff and officers to excel in their work. It has also been felt that instead of the HQrs office directly involving itself in the activity of nomination/ selection of individuals doing meritorious work, general guidelines could be provided to the Controllers to decide the Awards at their level while the HQrs office makes use of the database available with the Controllers to decide the Awards at All India Level.

II. LEVELS AND SCALE OF AWARDS

2.1 It is necessary to first identify the level of admissibility of the Awards. The broad parameters governing this are as follows:

a) Two Awards for the Best Official and/ or Team of Officials (upto the Sr.AO level and including Clerks/ Auditor/ SA/ AAO/ AO/ SAO) would be decided and given by each Pr. Controller/ Controller/ CFA (Fys) which will be regulated as per Annexure-I & Annexure-II enclosed.

b) There would be 02 Awards each for main office of PCA(Fys) Kolkata & the organisation of CIA (Fys).

Note: In exceptionally deserving cases, maximum number of awards to be given by a Principal Controller/Controller etc. under 2.1(a) & (b) could be enhanced to three with the prior approval of the HQrs. office. In such cases all the three entries would have to be forwarded to the HQrs. office latest by 06th July, 2021 for a decision.

(c) There would be 05 Awards for the offices under IFA set up as per distribution below :-

Addl.CGDA (IFA) shall be the Nodal Officer to decide the Awards for the offices of IFAs, which shall be regulated as per Annexure-lll enclosed.

(d) 05 Awards shall be given to the officers and staff of HOrs office upto SAO level [refer para 2.1(a)]. The distribution of Awards is:

Provided that the number of awards in any of these Sections could be increased to two subject to the condition that the total number of Awards remains 05.

03 entries will be selected and Awards given on an all India basis by the Hon’ble Raksha Mantri from amongst the winners already shortlisted by the Pr. Controllers/ Controllers/ IFAs/HQrs. office.