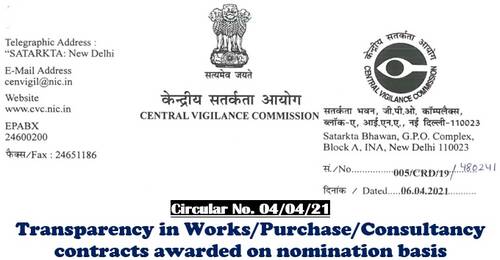 Central Vigilance Commission, as part of its drive to ensure transparency, to promote healthy competition and to provide fair and equitable treatment to all interested parties in matters of public procurement, has issued guidelines from time to time emphasizing on the need to adopt tendering process as a basic requirement, before award of contract to any party.

3. However, in some exceptional and inevitable circumstances, the contracts may be awarded on nomination basis; for instance, during natural calamities and emergencies declared by the Government; where procurement is possible from a single source only; where the supplier or contractor has the exclusive rights in respect of the goods or services and no reasonable alternative or substitute exists; where the auction was held on several dates but there were no bidders or the bids offered were too low etc. [Ref: SPL(Civil)No. 10174 of 2006 in case of Nagar Nigam, Meerut Vs Al Faheem Meat Export Pvt Ltd.].

4. But, it has been observed that i n some cases, the guidelines issued by the Commission are not being adhered to by the organizations. Therefore, the Commission would reiterate its earl ier guidelines and direct that:

(i) All works/purchase/consultancy contracts awarded on nomination basis should be brought to the notice of following authorities for information:

(ii) The report relating to such awards on nomination basis shall be submitted to the Secretary/Board/Chief Executive/equivalent managing body, every quarter.

(iii) The audit committee or similar unit in the organization may be required to check at least 10% of such cases.

5. Details of all tenders awarded on nomination basis shall be posted on website of the organization concerned, in public domain, along with brief reasons for doing so.

6. The above guidelines may be noted for strict compliance. 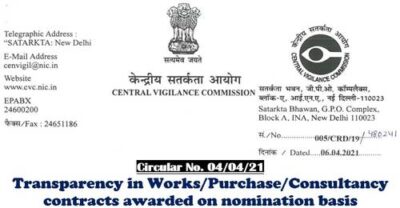