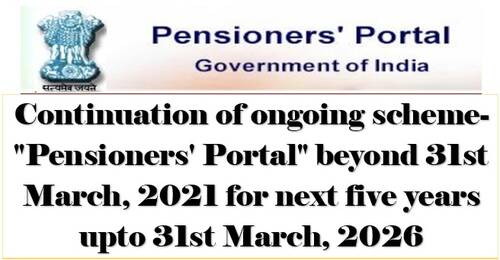 Continuation of ongoing scheme-“Pensioners’ Portal” beyond 31st March, 2021 for next five years

Payment of Provisional Pension and gratuity under Rule 62 of CCS Pension Rules, 2021, in case of delay in issue of PPO authorizing regular pension
Provisional Family Pension on death during Service: HoD can sanction the amount immediately, Govt. has relaxed the Rule 80-A.
Common Nomination Form for Arrears of Pension and Commutation of Pension – Form A

I. OBJECTIVES OF THE SCHEME

The Scheme is primarily aimed at making the pension/retirement online processing related services, Pensioners’ Welfare activities, information dissemination, awareness campaigns and grievances handling mechanism accessible online to the pensioners. This help bridge the gap between the pensioners and the Government. It is also expected to serve as a one stop grievance handling and information source for the pensioners of Government of India (especially civil pensioners) across the country.

The objectives of the Scheme are:-

II ACTIVITIES OF THE SCHEME

At present following activities are being operational through the Pensioners’ Portal: –

Under the Scheme provision has been made to sanction Grant-in-Aid up to a monitory limit of Rs.75000/- per Pensioners’ Association identified to participate in the implementation of the Scheme to defray expenses on specified components . The maximum permissible amount on the individual components has been prescribed as follows:-

Depending upon their individual needs the Pensioners’ Associations will have flexibility on spending on various approved items of components as mentioned above within the overall sanctioned amount. This flexibility will be to the extent of 25% on higher/lower side of individual component subject to overall spending within the sanctioned grant. The Pensioners’ Associations will also be provided necessary hardware/software for the purpose of lodging grievances etc. online on CPENGRAMS.

The financing of the Scheme will be through Demands for Grants of M/o Personnel, Public Grievances & Pensions – No extra budgetary sources, external aid, state share etc., are involved.

VI. EXTENSION OF THE SCHEME

Prior to its extension, the third party evaluation was done by Indian Institute of Public Administration (llPA) vide its Third party evaluation of Scheme – “Pensioners’ Portal” in May, 2021 and its detailed appraisal having been done by AS & FA (Home) has been approved for continuance by the Competent Authority for next five years beyond 31st March, 2021 . 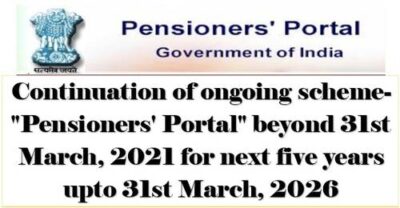