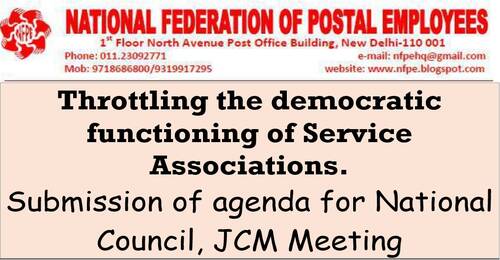 Throttling the democratic functioning of Service Associations – NFPE writes to Secretary, Staff Side to include in the agenda item of National Council JCM meeting

Therefore, it is requested that this matter may kindly be taken up with DOPT and as an agenda item for National Council, JCM meeting.

Encl: As mentioned above. 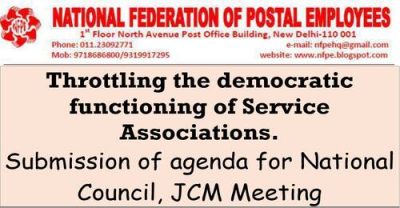 Sub: Throttling the democratic functioning of Service Associations. Need to withdraw the orders issued by the Department of Posts on 15.9.2021

Rule 15 of the CCS (Conduct) Rules places certain restrictions on the Government servant engaging himself in private trade or employment.

The rule as it existed in 1986 is reproduced as under:-

(a) engage directly or indirectly in any trade or business or;
(b) negotiate for, or undertake any other employment or
(c) hold an elective office or canvass for candidate or candidates for an elective office, in any body whether incorporated or not or
(d) ……..
(e) ……..
(f) ………

(a) Undertake honorary work of a social or charitable nature or
(b) Undertake occasional work of a literary, artistic, or scientific character or,;
(c) Participate in sports activities as an amateur, or
(d) …….
(e) …….

The CCS(Conduct) Rule is considered as a subordinate legislation and is promulgated under the transitory provisions of Article 309 of the constitution. It has been subjected to the scrutiny of the Parliamentary committee on subordinate legislation. Any amendment to the rules if it becomes necessary must be on invoking the said article of the constitution. The executive instructions, which are innumerable and are issued thereafter can only be clarificatory in character and cannot take the shape of amendments. In other words, the instructions, if it takes away any right or privilege conferred upon the employees under the constitutional provisions, enactments of the Legislature or the rules notified under Art. 309 are bad in law and not tenable.

As the caption indicates the rule speaks of trade or employment. Rule 15 specifically exclude the honorary work as specified in Rule sub-rule (2)thereof from its ambit of operation of sub-rule 1 and its various clauses. The Government employees who take part in the activities of the recreation dubs set up in each office or of the recognised associations/unions/federations are excluded from the ambit and operation of rule 15(1) and all its clauses. The orders issued by the Department of Personnel and Training in F.No. 11013/1/2016-Estt.A.III dated 27 February, 2021 and 5th August, 2020 have thus no application in so far as the conduct and functions of the recreation clubs or Associations/Unions or Federations are concerned as they are covered under the prohibitive clause of sub rule 2 of Rule 15.

In so far as Co-operative societies are concerned, It is to be stated that the 90th amendment to the Constitution regulates their functioning. No rule or legislation which is in violation of the constitutional provisions or imposes restrictions is sustainable Since the members of the Board of Directors, Vice President/Chairman, Treasurer or President/Chairman are in receipt of honorarium specified by the respective Co-operative society or co-operative bank, they may come under the mischief of Rule 15(1)©. As the Multi State Co-operative Society Act itself has stipulated the tenue period of President/Chairman, Vice President/Vice Chairman, Treasurer the clarificatory order appears to be in consonance with the provisions of the Act. In the case of Sports bodies, the restrictions imposed in 1994 appears to be arbitrary and sans the support of any rule or enactment. This apart most of the sports bodies, in which Government employees are elected as officials are the bodies set up for Government employees and do not have any monetary consideration for holding executive positions. It is therefore, requested that the untenable restrictions imposed by the Government in respect of the sports body officials, who do not receive any remuneration may be withdrawn.

Similarly, In the case of the members of the Board of Directors of the co-operative societies and banks, it is necessary to note that the members of these societies or banks are Government officials and these institutions are managed by the elected bodies of the government servants. These societies are to abide by the law of the land enacted either by the Parliament (as is the case with the Multi State Co-operative Societies) or the State legislatures. They are to function abiding by the restrictions imposed by the respective legislatures. The tenure of office of the principal office bearers has been stipulated in the enactment. But no such tenure period is specified in the case of Directors. We, therefore, request that the instructions imposing restrictions over the number of times one can seek elective positions or the duration of tenure in respect of Directors of Co-operative societies or Banks may be withdrawn.

The said O.M. suffers from various infirmities. We feel that the Department of Posts have overstepped their jurisdiction in issuing the above cited O.M. as issuing instructions either on the CCS(RSA) Rules or the CCS(Conduct) Rules is vested elsewhere. As mentioned in the foregoing paragraphs, the clause © of sub rule 1 of Rule 15 has no application in so far as regulating the functions of Service Associations are concerned. The Service Associations do not carry out any trade or employment. The functions of the office bearers of the Service Associations are honorary in character and is covered by Sub-Rule 2 of Rule 15 of the CCS (Conduct) rules, which reads as under.

“(2) A Government servant may, without the previous sanction of the Government-(a) undertake honorary work of a social or charitable nature.”

The very intention of the Department of Posts appears to be to stifle the functioning of the Service Associations as it imposes conditions to make the democratic process of free and fair election absolutely impossible. The bureaucratic intrusion into the election process has been legitimised by the Department of Post by issuance of this O.M. The conditions and restrictions imposed are also violative of Article 19 of the Constitution. We reiterate that the rules promulgated invoking the provisions of Art. 309 cannot be amended by executive fiats.

The Department of Posts ought to have realised that running a service Association is not a trade or employment and consequently the provisions of Rule. 15 has no application thereof.
Amendments which basically alter the existing rules, detrimental to the interest of the employees are required to be subjected to discussion and agreement reached at the forum of the National Council JCM before the orders are issued.