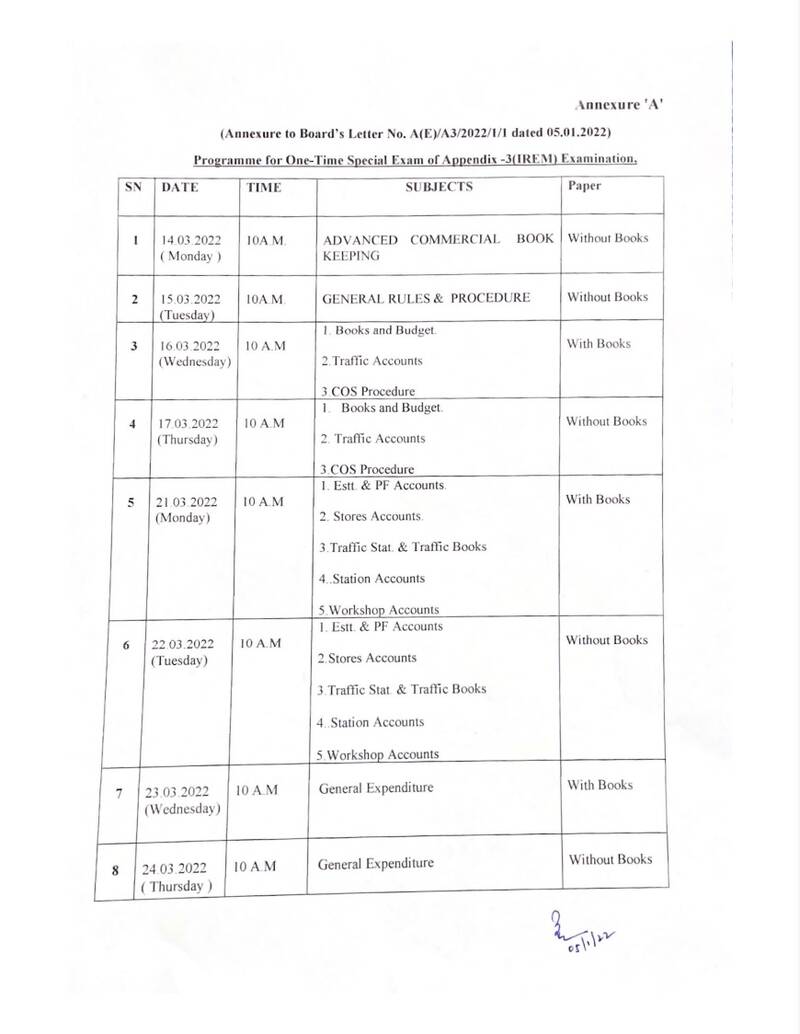 Conduct of One-time Special Exam on the old pattern of Appendix-III (IREM) Examination: Railway Board Order

Conduct of One-time Special Exam on the old pattern of Appendix-III (IREM) Examination: Railway Board

The Ministry of Railways (Railway Board) in consultation with Federations has decided to conduct a one-time Special Examination on the old pattern of Appendix-IH (IRE-M) Examination for those who have exemption in at least one paper in previous attempts at the Appendix III Examination. Immediate action may be initiated to call for the names of the eligible candidates who have exemptions in the old pattern of Appendix-III (IREM) Examination, and who wish to appear in the Special Exam.

2. The names of the eligible candidates who desire to answer their papers in Hindi from your unit may please be indicated Group-wise and Centre—wise. No change in medium shall be entertained once the details of candidates are submitted to Railway Board

i) The list of candidates who obtained exemptions as mentioned in para 2 2. should be completed by 21.01 2022 Administration should obtain acknowledgment and options from the eligible candidates, in writing, with clear understanding with respect to Para 2 3.

iii) Number of candidates (centre wise) as updated up to 28 01.2022, with the approximate number of question papers (excluding spare copies) required in each subject should be sent to the Railway Board by 04.02.2022.

iv) List of candidates as per Proforma given in Annexure-B (to be filled in “Excel! format in font size-12. Times New Roman) The list should be carefully checked especially regarding the category of each candidate and exemptions obtained and should be signed on each page by a Gazetted officer The details of exemptions against subjects, along with marks obtained, should specify the relevant Roll No. and the year of the examination. The hard copy should be accompanied by a covering letter duly signed by the concerned FA&CAO dealing with administration or Dy CAO/G, certifying that the list has been checked for correctness of particulars of each candidate Any subsequent correction/modification to the list should be issued with the personal approval of the PFA It may be ensured that all instructions issued for preparation of lists are carefully followed.

4, No cognizance will be given by the Board for receipt of information after the target dates mentioned in para 3 above.

5 Those Units for which separate block of Roll Numbers have not been allotted. will liaise with contiguous Zonal Railway Headquarters for processing their cases However. Metro Railway/Kolkata is required to forward the names of its eligible staff directly to Railway Board us a separate unit and the candidates may opt for Kolkata centre of Eastern Railway in terms of Board’s letter referred at Para 3(v) above

6. It is reiterated that in addition to above instructions. all other instructions revaraine conducting One-Time Special Exam on the old pattern of Appendix-III(IREM) Examination circulated from time to time should be scrupulously followed

7. In view of limited number of candidates the Examination Centre will be at Zonal Headquarter only.

8 If any change becomes necessary after sending the data, only the specific changes/modifications may be advised, instead of sending the complete list again.

9. This is the last examination of Appendix-III in the old pattern. Exemptions will not be carried forward. No exemptions will be awarded in the Special Exam. For further clarification. following officials may be contacted

10 The receipt of this letter may be acknowledged.

Loading...
Newer Post
Payment of family pension in respect of a child suffering from a disorder or disability of mind through the person nominated by the Government servant/pensioner/family pensioner
Older Post
Cash Management System in Central Government: Latest Order by Department of Economic Affairs