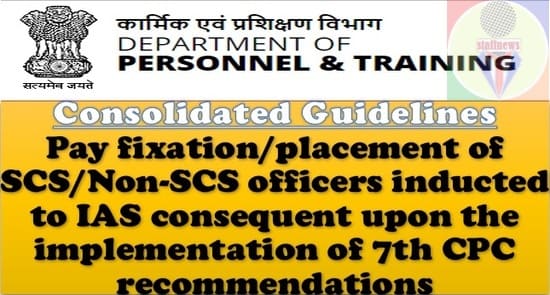 Instructions have been issued from time to time regarding (A) pay fixation of IAS officers inducted from SCS/ Non-SCS consequent upon the implementation of 7th CPC recommendations; (B) methodology for fix ing the pay of those members of service, who have been inducted to IAS from SCS/ Non-SCS with seniority of 9 years or more in IAS and have not completed their MCTP Phase-III and; (C) stepping up of pay of senior member of All India Service vis-a-vis pay of his junior in the cadre. In order to bring clarity to the existing instructions and enable uniform implementation, an effort has been made to review, consolidate and reiterate the guidelines issued so far on the subject at one place.

A. Pay fixation of SCS/Non-SCS officers inducted to IAS consequent upon the implementation of 7th CPC recommendations

2. The initial pay of an IAS officer promoted from SCS or appointed by selection from Non-SCS , as the case may be, shall be fixed at the relevant stage of the Senior Scale e. Senior Time Scale (Level 11), Junior Administrative Grade (Level 12) and Selection Grade (Level 13) based on seniority obtained by him, by protecting his State Pay. There is no provision of increment at the stage of initial fixation.

3. Consequent upon induction to IAS, promotion from one to another grade of IAS is considered as per extant provisions of IAS (Pay) Rules, 2016 read with IAS promotion guidelines.

4. In respect of fixation of pay of officers who were promoted/Selected in IAS through SCS/ Non-SCS respectively in Senior Time Scale/Junior Administrative Grade after 01.01.2016, the initial pay shall be fixed in the respective level of the Senior Scale i.e Level-11, 12 or 13 based on the year of allotment in the IAS. However, the pay drawn in the State Civil Services will be protected in the concerned Level.

6. The pay of IAS officers who were promoted/selected in IAS through SGS/ Non-SGS respectively prior to 01 .01 .2016 will be converted as per 7th GPG on 01 .01.2016 and they shall be placed in the Level in the Pay Matrix in accordance with the length of service as per the allotment However, pay of those officers, who are due to get promoted to JAG/Selection Grade of IAS on 01.01.2016 , will be first converted notionally on 01.01.2016 as per 7th GPG (i.e before promotion) and shall be placed notionally in the Level of Pay Matrix, in accordance with the length of service as per their allotment year, at the stage of the senior scale. On their actual promotion to JAG/Selection Grade, the pay of these officers will then be fixed as per IAS (Pay) Rules, 2016 . That is, the officers will be eligible for two additional increments on their actual promotions to Level 12/ Level 13 after completion of 9/ 13 years of service in IAS respectively.

7. The provision contained in part (7) of Schedule-I of IAS (Pay) Rules, 2016, which provides that Notwithstanding anything contained in these rules, the pay of a promoted officer or an officer appointed by selection, as the case may be, shall not at any time exceed the basic pay which he would have drawn as a direct recruit on that date if he had been appointed to the Indian Administrative Service on the date on which he was appointed to the State Civil Service or in a Gazetted post in the non-State Civil Service, after attaining the age of twenty five years, as the case may be” shall be adhered to.

B. Guidelines regarding methodology for fixing the pay of those members of service, who have been inducted to IAS from SCS/Non-SCS with seniority of 9 years or more in IAS and have not completed their MCTP Phase-III.

“Provided that a member of the service shall be appointed to the Junior Administrative Grade only after he has completed phase Ill mandatory Mid Career Training Programme with effect from the date on which he would have been eligible for appointment in the Junior Administrative Grade if not for completion of the mandatory Mid Career Training Programme.”

The above provisions stipulate for completion of MCTP-III for promotion of IAS officers from Senior Time Scale (STS) to Junior Administrative Grades (JAG). However, there may be situations where IAS officers appointed / selected from SCS / Non-SCS with a seniority of 9 years  or more as per provisions of  IAS (Regulation of Seniority) Rules, 1987, ARE REQUIRED TO BE placed directly in Junior Administrative Grade of IAS in the light of the instructions mentioned in para 2 to 7. In such situations , provisions regarding MCTP-III cannot extend to such officers, ipso-facto.

9. It has also been noticed that though the instructions mentioned in para 2 to 7 above comprehensively covers the matters pertaining to fixation of pay and grant of grade in IAS, on induction to IAS on being appointed / selected from SCS / Non­ SCS, there may arise certain doubts due to extant provisions regarding MCTP III which inter-alia provides it to be one of the criterion for considering IAS officers for promotion to the JAG.

10. Accordingly, it is clarified that as per the provisions contained in the instructions mentioned in para 2 to 7 above, the members of service having attained seniority of 9 years or more are eligible to be directly placed in Level 12 (JAG) on their induction to IAS on being appointed / selected from SGS / Non-SGS, in the manner explained  in the said   Further, while doing so, the  State Government shall ensure that such members of service shall be relieved to attend said MCTP-III in the first instance of nomination for the purpose and it shall be explicitly stipulated in the order itself that such members of service will have to mandatorily complete their training on being nominated for the same, failing which their promotion to next higher grade will be affected .

C. Guidelines regarding stepping up of pay of senior member of All India Service vis-a vis- of his junior in the cadre-reg.

11. The matter regarding anomalies in the pay of senior members of All India Service vis-a-vis pay of their juniors in the cadre who have been promoted to the Service or to a higher grade in the Service subsequent to the seniors, have been examined in this department and in this regard it is stated that such anomalies on account of fixation of pay on promotion, including the promotion from State Service to All India Service, can be solved by stepping up the pay of the senior member of Service at par with the pay of junior in the cadre from the date when the anomaly arose, subject to fulfillment of following conditions:

(iii) Posts in higher and lower grade must be identical and in lower grade senior must not be drawing less pay than junior for whatsoever reasons.

For example if the junior officer draws higher rate of pay than the senior in the lower post or State service post by virtue of advance increments or on any other account, the above provisions will not be invoked to step up the pay of the senior officer. 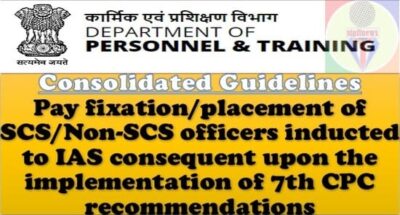