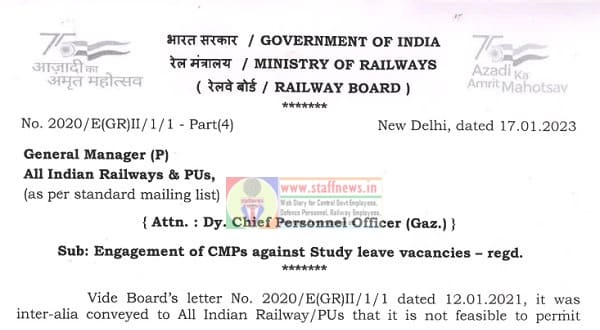 Engagement of CMPs against Study leave vacancies: Railway Board Order 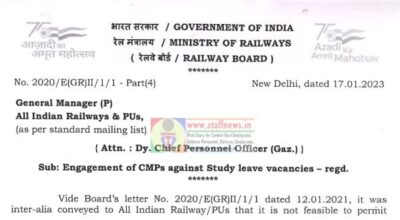 Vide Board’s letter No. 2020/E(GR)II/1/1 dated 12.01.2021, it was inter-alia conveyed to All Indian Railway/PUs that it is not feasible to permit engagement of Contract Medical Practitioners (CMPs) against temporary vacancies arising on account of IRHS doctors proceeding on sanctioned Study leave.

2. Recently, requests have been received from some of the Zonal Railways again, seeking permission for engagement of CMPs against Study leave vacancies and also requesting Board’s office to revisit the letter dated 12.01.2021, stating that when an officer is on any kind of leave (on leave salary), for more than one year, it is taken as vacancy and therefore filled-up by promotion or by posting some other officer to look after the duties.

3. The issue has been re-examined in Board’s office in consultation with Health Dte., and it is reiterated that engagement of CMPs against Study leave vacancies has not been found feasible as this amounts to incurring ‘double expenditure’ for the same post.

4. As regards shortage of doctors on account of ADMOs availing Study leave, attention is drawn to Board’s instructions contained in letter No. E(OJIII-2016/PL/03 dated 17.10.2006 which prescribe that General Managers, while considering the proposals for grant of study leave, shall satisfy themselves that more than the required number of specialists are not already available and that the work can be managed without substitute during the absence of the officers, who have been granted study leave.