Kiran Kumari 0 October 6, 2012 3:24 am
F.No.42/13/2012-P&PW(G)
Government of India
Ministry of Personnel, Public Grievances & Pensions
Department of Pension & Pensioners’ Welfare
3RD Floor, Lok Nayak Bhavan,
Khan Market, New Delhi – 110003
Date: 4th October, 2012
OFFICE MEMORANDUM
Subject: Grant of Dearness Relief to Central Government pensioners/family pensioners — Revised rate effective from 1.7.2012.
The undersigned is directed to refer to this Department’s OM No.42/13/2012-P&PW(G) dated 4th April, 2012 on the subject mentioned above and to state that the President is pleased to decide that the Dearness Relief (DR) payable to Central Government pensioners/family pensioners shall be enhanced from the existing rate of 65% to 72% w.e.f. 1st July, 2012.
2. These orders apply to (i) All Civilian Central Government Pensioners/Family Pensioners (ii) The Armed Forces Pensioners, Civilian Pensioners paid out of the Defence Service Estimates, (iii) All India Service Pensioners (iv) Railway Pensioners and (v) The Burma Civilian pensioners/family pensioners and pensioners/families of displaced Government pensioners from Pakistan, who are Indian Nationals but receiving pension on behalf of Government of Pakistan and are in receipt of ad-hoc ex-gratia allowance of Rs.3500/- p.m. in terms of this Department’s 0M No. 23/1/97-P&PW(B) dated 23.2.1998 read with this Department’s OM No. 23/3/2008-P&PW(B) dated 15.9.2008.
3. Central Government Employees who had drawn lumpsum amount on absorption in a PSU/ Autonomous body and have become eligible to restoration of 1/3rd commuted portion of pension as well as revision of the restored amount in terms of this Departments 0M No.4/59/97-P&PW (D) dated 14.07.1998 will also be entitled to the payment of DR @ 72% w.e.f. 1.7.2012 on full pension i.e. the revised pension which the absorbed employee would have received on the date of restoration had he not drawn lumpsum payment on absorption and Dearness Pension subject to fulfillment of the conditions laid down in para 5 of the O.M. dated 14.07.98. In this connection, instructions contained in this Department’s 0M No.4/29/99-P&PW (D) dated. 12.7.2000 refer.
4. Payment of DR involving a fraction of a rupee shall be rounded off to the next higher rupee.
5. Other provisions governing grant of DR in respect of employed family pensioners and re-employed Central Government Pensioners will be regulated in accordance with the provisions contained in this Department’s OM No.45/73/97-P&PW (G) dated 2.7.1999 as amended vide this Department’s OM No.F.No.38/88/2008-P&PW(G) dated 9th July, 2009. The provisions relating to regulation of DR where a pensioner is in receipt of more than one pension, will remain unchanged.
6. In the case of retired Judges of the Supreme Court and High Courts, necessary orders will be issued by the Department of Justice separately.
7. It will be the responsibility of the pension disbursing authorities, including the nationalized banks, etc. to calculate the quantum of DR payable in each individual case.
8. The offices of Accountant General and Authorised Public Sector Banks are requested to arrange payment of relief to pensioners etc. on the basis of these instructions without waiting for any further instructions from the Comptroller and Auditor General of India and the Reserve Bank of India in view of letter No. 528-TA, 11/34-80-II dated 23/04/1981 of the Comptroller and Auditor General of India addressed to all Accountant Generals and Reserve Bank of India Circular No.GANB No.2958/GA-64 (ii) (CGL)/81 dated the 21st May, 1981 addressed to State Bank of India and its subsidiaries and all Nationalised Banks.
9. In their application to the pensioners/family pensioners belonging to Indian Audit and Accounts Department, these orders Issue after consultation with the C&AG.
10. This issues with the concurrence of Ministry of Finance, Department of Expenditure conveyed vide their OM No.1(4)/EV/2004 dated 4th October, 2012.
11. Hindi version will follow.
sd/-
(S.P.Kakkar)
Under Secretary to the Government of India 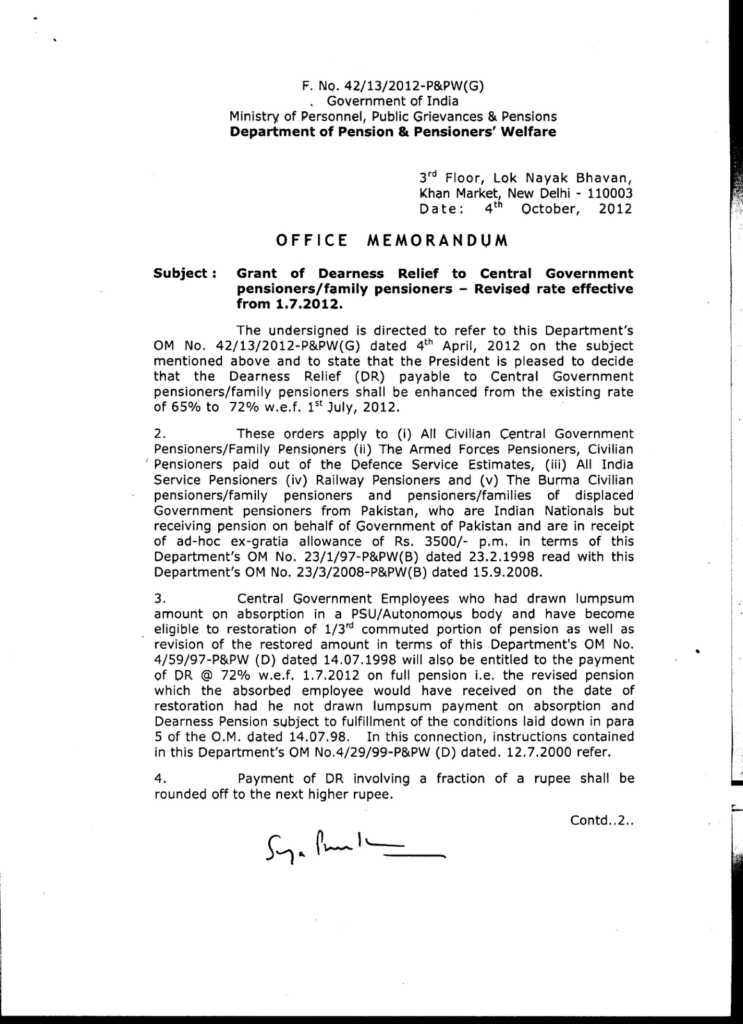 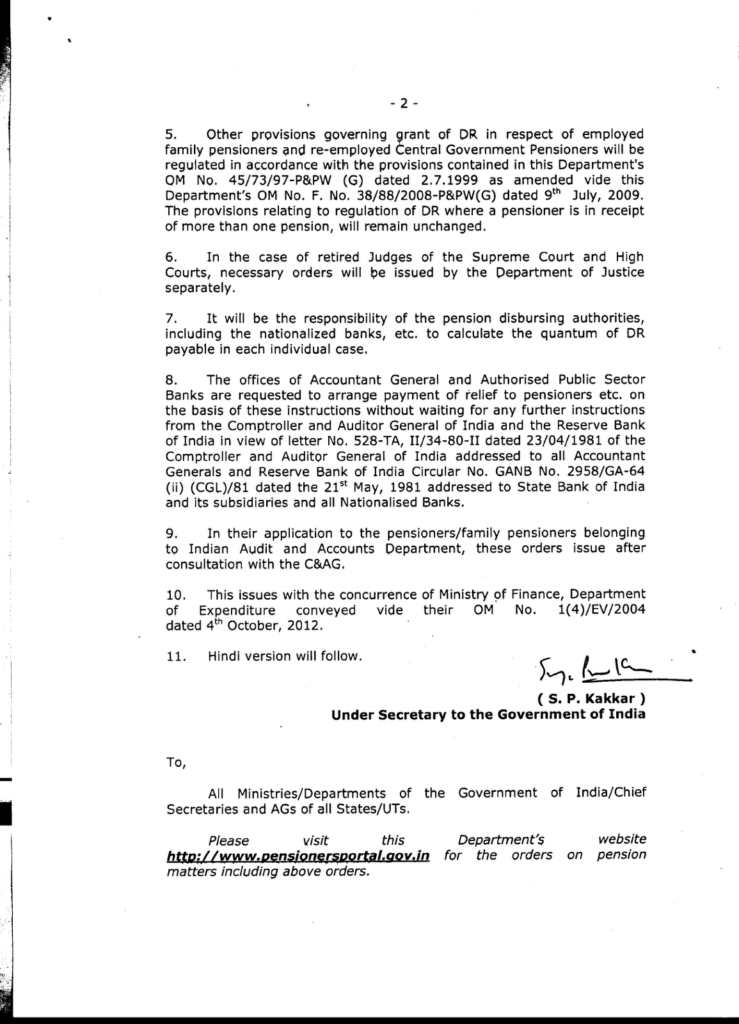