Subject: Implementation of Government decision on the recommendations of the Committee Secretaries 2012 on the issues related to Defence Service Personnel and Ex-Servicemen- Enhancement of Ordinary Family Pension in respect of pre-2006 JCO/ORs family pensioners.

As per provisions contained in GOI, MOD letter No. 1(14)/2012/D(Pen/Policy) dated 17.01.2013 [click here to view],  cases for revision of ordinary family pension in respect of personnel with qualifying service less than 15 years shall be referred to the respective PSAs on Annexure-A annexed with GOI MOD letter for issue of Corr PPO. However, it has been observed that in all cases with qualifying service less than 15 years the minimum guaranteed ordinary pension rates are beneficial as prescribed in Para 3 of above cited GOI, MOD letter.
2. These minimum guaranteed ordinary family pension in respect of pre-2006 JCO/OR including honorary Commissioned officers and Non Combatants (Enrolled) of Army, Navy, Air Force, DSC & TA family pensioners shall be determined as thirty percent of the pay in the pay band corresponding to minimum of pre-revised pay scale as indicated under fitment tables annexed with SAI 1/S/2008 as amended and equivalent instructions for Navy & Air Force, plus the Grade pay corresponding to the pre-revised scale from which the pensioner had retired/discharged/invalided out/died including Military Service Pay and ‘X’ Group pay, wherever applicable. The minimum guaranteed rates of Ordinary Family Pension are provided as Appendix-X of this circular for ready reference.
3. It is therefore, all PDAs are requested that such type of cases may not be sent to PSAs on Annexure ‘A’. The payment of normal rate of family pension in these cases may be regulated at the minimum guaranteed rates and family pensioners may be informed accordingly. 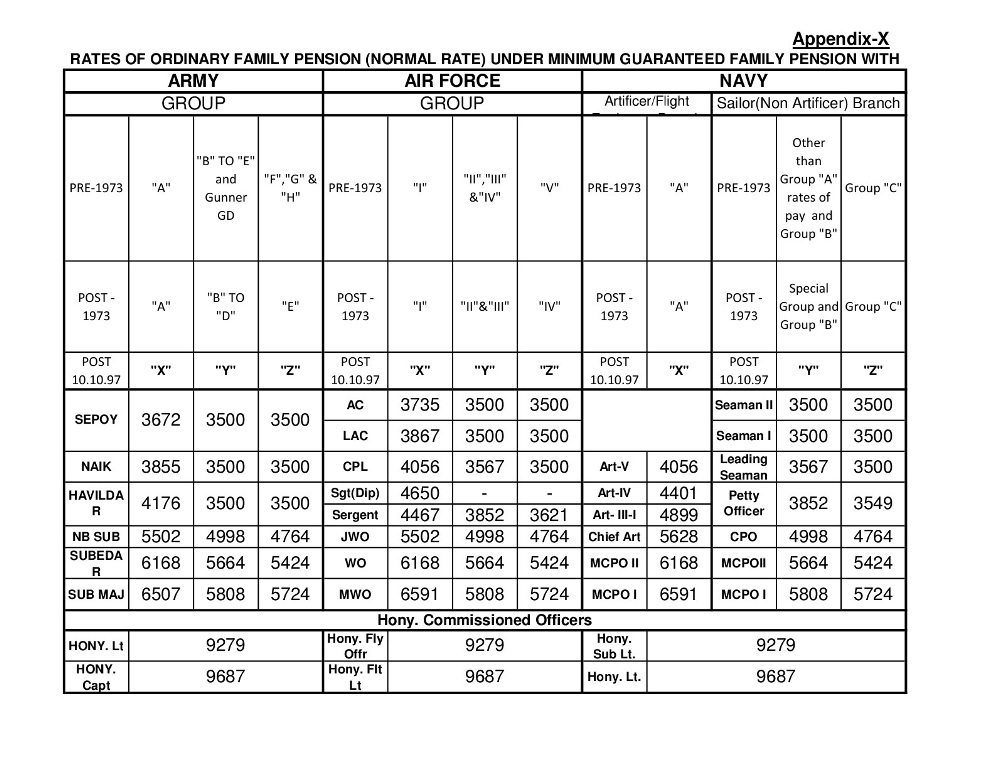 To view all One Rank One Pension Order click here
Stay connected with us via Facebook, Google+ or Email Subscription.