All the Beneficiaries &
Waitlisted applicants of
Bhubaneswar (Phase-II)
Housing Scheme

Sir/Madam,
This letter is issued in continuation of CGEWHO’s letter of even reference dated 20/03/2014 and 24/04/2014 respectively.
2.Revised cost of Bhubaneswar (Phase-II) Project was communicated to all beneficiaries on 20/03/2014 which was later kept in abeyance vide letter of dated 24/04/2014 since M/o Housing and Urban Poverty Alleviation (HUPA) constituted a Technical Review Committee {Executive Director (W&D)-HUDCO Regional Office, Bhubaneswar as Chairman, DGM(Project)-HUDCO Regional Office, Bhubaneswar as Convenor, Representative of Chief Engineer-Eastern Zone i.e. SE, CPWD-Bhubaneswar as Member & CEO, CGEWHO as Member} for review and examination of the costing worked out by CGEWHO. The Committee have submitted its Report {For details visit www.cgewho.in} to Secretary (HUPA) and President, Governing Council/CGEWHO and accordingly the revised cost including one car parking works out to be Rs.2631/= per sft {including one car parking} considering estimated escalation up to June’2016 instead of Rs.2776/= with estimated escalation up to Dec’2017; as informed earlier. Accordingly, instalment(s) have been reworked and mentioned in Table-A of annexure-I.
3.According to our earlier communications, beneficiaries are requested to forward their option(s) either to continue with the scheme with the payment due date 14/08/2014 or to withdraw from the scheme by the last date 14/08/2014 in the ANNEXURE-II. Those who had paid against our earlier demand letter dated 20/03/2014 will be adjusted the excess amount paid in 2nd Ins. and interest @5% will be credited to individual account at the time of calling 6th and final instalment {For details of the excess amount; please see Table-B of annexure-I AND Para-4(e)}.
4. Information for the beneficiaries who are going for OPTION-I :: Confirming to continue in the Bhubaneswar-II Hsg Scheme.
a) The beneficiary will have to opt by ticking in the relevant option who have not done yet and to enclose a Demand Draft of relevant difference amount as applicable {refer Column-6 of Table-A} for his/er type of DU for revised cost of Bhubaneswar-II Project.
b) There will be NO separate Scheme Brochure containing ‘CGEWHO Rules’ apart from this Intimation Letter. The Scheme Brochure issued earlier with this letter of intimation will form the ‘Agreement’ between CGEWHO and Beneficiaries of Bhubaneswar-II Hsg Scheme; along with CGEWHO’s letter No. A-520/2 dated 15/12/2011(its reminder dated 15/03/2012) and 20/03/2014.
c) The construction works will likely to be completed in 36 months time from the last date of the 2nd Instalment. The 2nd instalment will likely to be called on commencement of the construction sometimes in the month of August’2014 or thereafter.
d) All payments will be made by Demand Draft/Pay Order only on any Bank payable at New Delhi, drawn in favour of the CGEWHO A/c 0267101018816 Canara Bank duly endorsed ‘payee A/c only’. Payments in cash or cheque will not be accepted. Interest would be charged @15% p.a. for the period of delay, as per CGEWHO Rules. Part Payments are also permitted. Those who have paid announced cost of flat in entirety are requested to forward their willingness in the enclosed annexure-II with reference of payments made.
e) Those beneficiary who have paid against the CGEWHO’s demand letter dated 20/03/2014; the excess amount paid {Table-B in annexure-I} by the beneficiary will be adjusted in the 2nd instalment which will be called in the month of Aug./Sept.2014. The interest on the excess amount will credited @5% on their account at the time of calling of 6th and final instalment from 30/04/2014 or date of payment (whichever is later) to 14/08/2014.
f) This revised demand/call-up letter of differential amount {as mentioned in the Col.6} of announced & revised cost of 1st instalment may be utilized for release of fund from House Building Advance from Govt. of India Organization or Housing Loan from Banks or Financial Institution, as the case may be.
5. Information for the beneficiaries who are going for OPTION-II :: Withdrawal from the Bhubaneswar-II Hsg Scheme.
a) The beneficiary who will opt to withdraw from the scheme will have no claim on allotment in the scheme and will be refunded with credit of interest @5% pa from the last date of 1st Instalment or date of receipt of amount in CGEWHO’s Account whichever is later to the last date of sending the ‘option’ to CGEWHO (i.e. 14/08/2014). Withdrawal ‘option’ received after the last date also be refunded with credit of interest till the last date of receiving the option i.e. 14/08/2014.
b) Those who have already withdrawn refund will be processed with interest @5% till the date of processing the refund. Out of these beneficiaries, any beneficiary, even now, interested to keep his/er allotment intact with Final revised cost; are advised not to deposit/encash the Refund Cheque and would like to forward his/er revised option with the refund cheque to revive their allotment to CGEWHO’s Head Office, as a special case. However, such requests shall be entertained only till 14/08/2014, failing which, the allotment shall be made to the applicants in the waiting list.
c) Those who have availed the HBA or Housing Loan from Bank/Financial Institution are requested to clear the outstanding of his/er Department or Bank/Financial Institution first and forward ‘NOC’ towards repayment of HBA/Loan and original documents (released) so that refund can be processed directly in the name of beneficiary.
6. The copy of this letter dated 09/07/2014 along with individual outstanding amount will be available in the official website : www.cgewho.in
Yours truly,
Encl. : As stated (Annexure-I & II)
M K Maity
Deputy Director (Administration)
For Chief Executive Officer 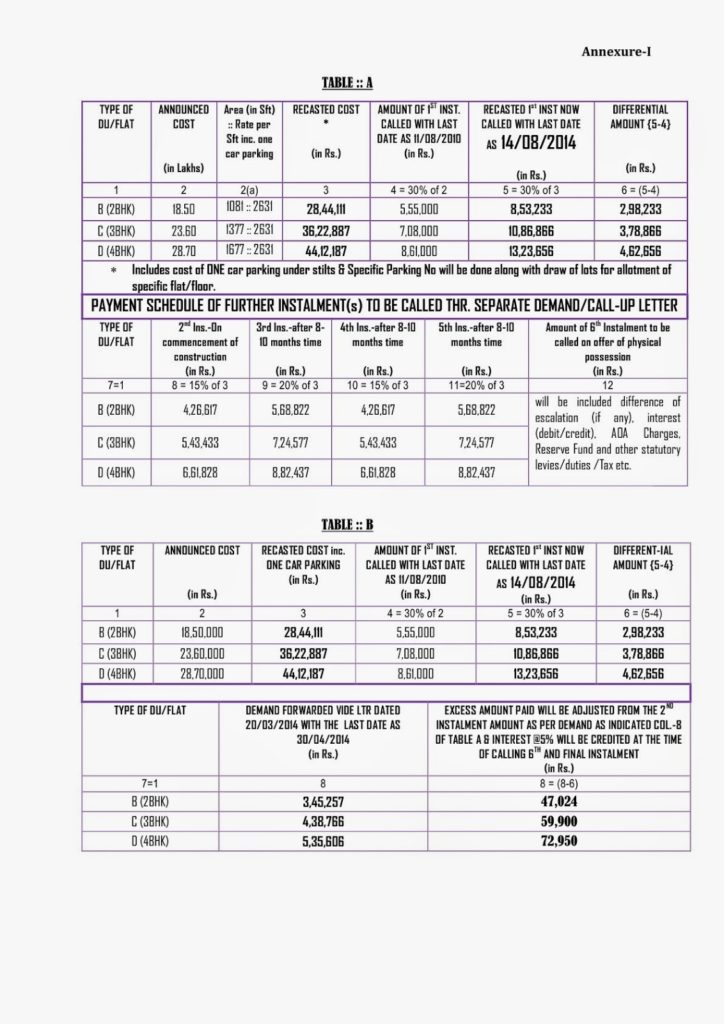 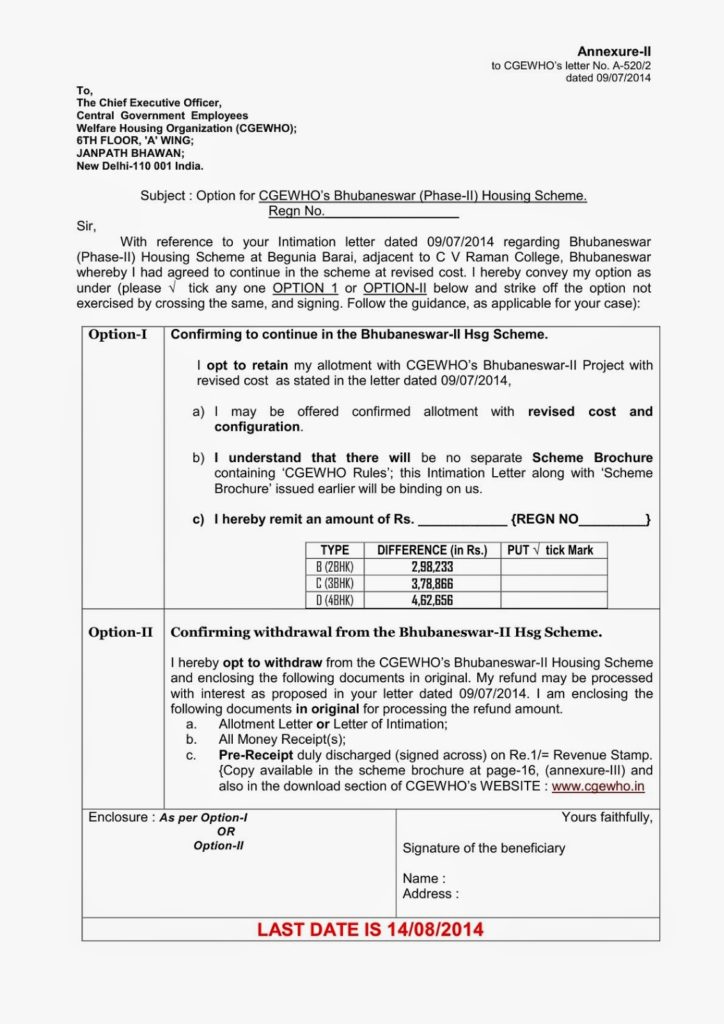