New Delhi, Aug. 20: The sarkari babu will have to make every minute count.

The Narendra Modi government has ordered that an Aadhaar Enabled Biometric Attendance System (AEBAS) be implemented in all central government offices. 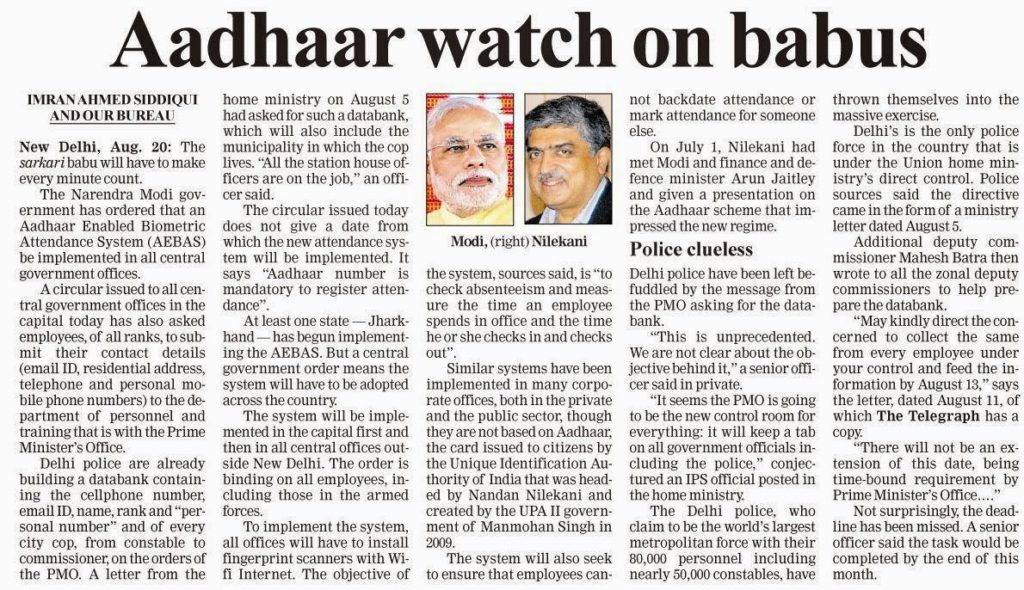 A circular issued to all central government offices in the capital today has also asked employees, of all ranks, to submit their contact details (email ID, residential address, telephone and personal mobile phone numbers) to the department of personnel and training that is with the Prime Minister’s Office.
Delhi police are already building a databank containing the cellphone number, email ID, name, rank and “personal number” and of every city cop, from constable to commissioner, on the orde

rs of the PMO. A letter from the home ministry on August 5 had asked for such a databank, which will also include the municipality in which the cop lives. “All the station house officers are on the job,” an officer said.

The circular issued today does not give a date from which the new attendance system will be implemented. It says “Aadhaar number is mandatory to register attendance”.
At least one state — Jharkhand — has begun implementing the AEBAS. But a central government order means the system will have to be adopted across the country.
The system will be implemented in the capital first and then in all central offices outside New Delhi. The order is binding on all employees, including those in the armed forces.
To implement the system, all offices will have to install fingerprint scanners with Wi-fi Internet. The objective of the system, sources said, is “to check absenteeism and measure the time an employee spends in office and the time he or she checks in and checks out”.
Similar systems have been implemented in many corporate offices, both in the private and the public sector, though they are not based on Aadhaar, the card issued to citizens by the Unique Identification Authority of India that was headed by Nandan Nilekani and created by the UPA II government of Manmohan Singh in 2009.
The system will also seek to ensure that employees cannot backdate attendance or mark attendance for someone else.
On July 1, Nilekani had met Modi and finance and defence minister Arun Jaitley and given a presentation on the Aadhaar scheme that impressed the new regime.
Police clueless
Delhi police have been left befuddled by the message from the PMO asking for the databank.
“This is unprecedented. We are not clear about the objective behind it,” a senior officer said in private.
“It seems the PMO is going to be the new control room for everything: it will keep a tab on all government officials including the police,” conjectured an IPS official posted in the home ministry.
The Delhi police, who claim to be the world’s largest metropolitan force with their 80,000 personnel including nearly 50,000 constables, have thrown themselves into the massive exercise.
Delhi’s is the only police force in the country that is under the Union home ministry’s direct control. Police sources said the directive came in the form of a ministry letter dated August 5.
Additional deputy commissioner Mahesh Batra then wrote to all the zonal deputy commissioners to help prepare the databank.
“May kindly direct the concerned to collect the same from every employee under your control and feed the information by August 13,” says the letter, dated August 11, of which The Telegraph has a copy.
“There will not be an extension of this date, being time-bound requirement by Prime Minister’s Office….”
Not surprisingly, the deadline has been missed. A senior officer said the task would be completed by the end of this month.
Source: The Telegraph