1. Secy.JCM (staff side) Com. Shiva Gopal Mishra supported BPS on all Issue raised by it in SCOVA 25th meeting 0n 5th of Sept 2014 and we are thankful 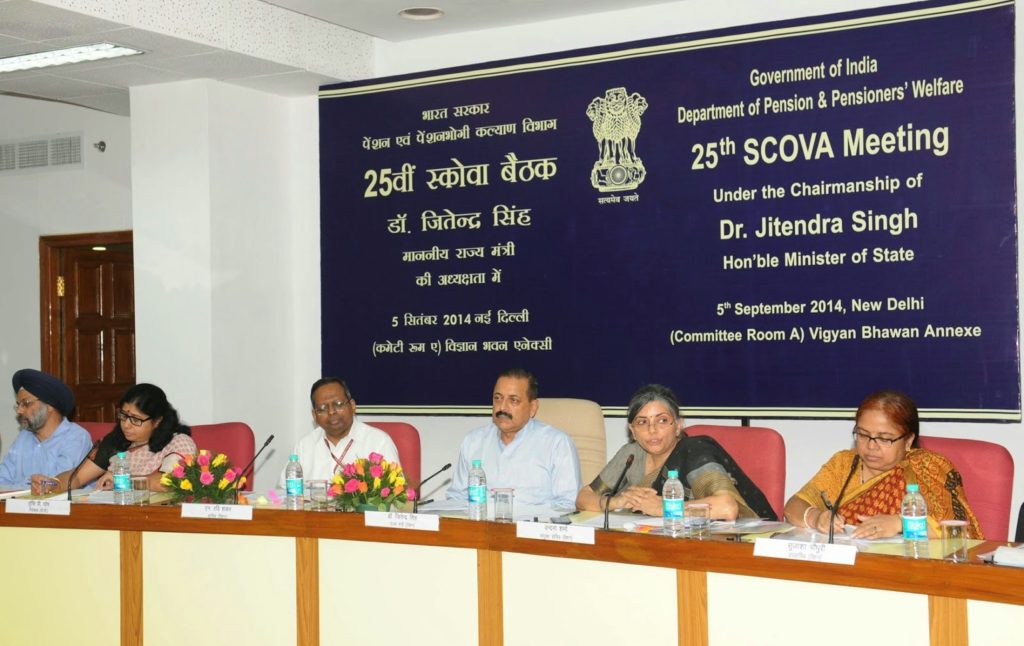 Honorable MOS Dr Jitinder Singh arrived at 11.25 hrs. SCM Secy. Genl BPS & Com S.G.Mishra Secy.JCM (staff side) were seated exactly opposite the Honorable MOS(P).  First of all tribute was paid to Sh Umraomal Prohit. One minute silence was observed in his honor.  While welcoming, the Minister Ms Vandana Sharma J.S (P) gave brief description of SCOVA & other activities & achievements of DOPPW. There after MOS took up the Mic to speak but Secy. JCM requested him to first have feel of the house to which the Minister agreed .

Secy. JCM while introducing himself stressed

(i) that the  SCOVA Agenda  be decided in consultance with JCM(staff side) & SCOVA members
(ii) More time be given for SCOVA meeting with increased frequency & if need be meeting may be conducted on Saturday or Sundays
(iii) Court judgments be implemented to all similarly placed pensioners w/o trying to push each one of them to the Court.
(iv) every ministry & Departments have agreed to meet pensioners once a week but Rly Ministry will meet 11 lac pensioner  only once a year i.e. on 15th of December  which is ridiculous
(v) SCOVA Minutes are one sided, it should contain non official member’s version also. Draft minutes should be circulated first for member’s comments.

(i) that though Pensioners Portal is promptly providing orders/circulars/notifications issued by DOPPW but other Ministries & Departments are not doing so
(ii) Grievances recorded on Portal are closed for the sake of closing & are not being resolved properly.
(iii) when tried to raise the issue of implementation of CAT orders JS interrupted saying that it is  in today’s Agenda & will be discussed when Agenda is taken- up.
Sh. Y.N. Sastry pointed out that when 7th CPC was requested for effective grievance redressal mechanism.
Chairman remarked “It will not help you. Court is the only alternative” which amply highlights the poor grievance mechanism.
Minister’s response was positive & Secy. was asked to take notes of the issues raised, he observed that henceforth Grievances should not be closed for the sake of closing. He also advised SCOVA members & representative of Pensioners Associations especially those based in Delhi & NCR to often visit DOPPW to interact with officers & to assist them to serve Pensioners in a better way.  As the minister was required to attend visiting Australian PM he left after his address with instructions to Secretary to continue.
ATR [Action Taken Report on Pensioner’s Demand: SCOVA 24th Meeting (view)] & Fresh Agenda was discussed thereafter. Highlights as follows
1.Issue of revised PPOs : Non official SCOVA members expressed reservation & suspicion on the  progress given in ATR
2.Pension Adalat :Non official members asked for amendment in Pension Adalat Rules to allow Associations to plead Pensioners cases and for increase in frequency.
3.CGHS :  Discrimination with Postal pensioners & extention of facility to BSNL Pensioners 2.Secy Genl BPS pointed out the health care is not a luxury in the hands of few privileged rather it is a fundamental Right of all present &past employees w/o  status or departments discrimination as pronounced by Supreme Court . All Pensioners irrespective of department & status t be provided adequate health care facilities. Secy DOPW  remarked “I fully agree with you” .Issue of  supply of medicines, reimbursements increasing coverage etc were also raised  : Secy ruled, DOPPW will request M/o Health & FW to evolve integrated health care system . Till such time JS (p) will take up with DG CGHS the issues of discrimination with Postal pensioners, extension of facilty to BSNL pensioners & supply of medicine etc.
4. Implementation of OA655/2010 extension of OM dt 28.1.2013 wef from 01.01.06: Issue was very strongly raised by S.C. Maheshwari  Secy. genl. BPS supported by JCM Secy Com Shiva Gopal Mishra & Com S.K.Vyas. After persistent  pressure . Secy. Said “though I have just taken over, I have studied the case in detail. I am seized of the issue& trying to resolve give me some time. Govt. will have to implement Court’s orders”.
5. Dedicated Day of the week to meet Pensioners: While every department  allotted a day per week to meet pensioners Rlys Ministry Said they will meet only once a year on 15th December .This was termed ridiculous by both official & non official side . Rly Bd representative assured to review it. Similarly Department of Ex-servicemen Welfare was bitterly criticized by non official members for asking ex-servicemen to  avail the facility at Allahabad  only
6. Merger of 78% IDA in case of BSNL pensioners:  Orders to be issued within a week
7.Anomoly in fixation of pension DOT/BSNL : Case to be resolved within a month
8. Demand of insolvency & income certificate from Tehsildar  by Rlys to sanction family pension to widowed,divorced & unmarried dependent daughters: Secy. SCOVA told Rly Board representative to make their subordinate offices to understand that self-certification is to be accepted.
9.Stepping up of Disability Element on the basis of Fitment Table :
1.For ex-servicemen: Under active consideration of MOD
2. For Civil Pensioners proposal submitted to DOE on 23.7.2014 approval awaited.
S.C.Maheshwari
S.G. Bharat Pensioners Samaj

MOS (P)’s Speech as reported by PIB [click to view]