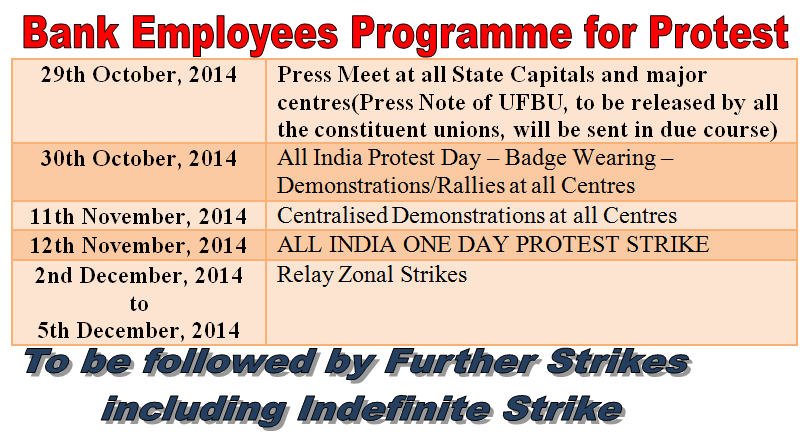 We had informed our Units, vide our Circular dated 26-9-2014, about the negative approach of the IBA in the negotiations for wage revision. Having regard to the need to express our strong resentment and protest, UFBU has already given the call for observing certain agitational programmes including demonstrations on 17th October 2014 and for holding Dharnas in various States between 18th and 31st October, 2014. In view of the intermittent festival holidays in various parts of the country, the dates for the strike actions were decided to be finalised later.

In this background, UFBU meeting was held today in Bengaluru to chalk out the programmes and after due deliberations, the following further programmes have been decided upon:

To be followed by Further Strikes including Indefinite Strike
It was also decided unanimously by the UFBU to withdraw all types of extra co-operation by workmen/officers with immediate effect and to boycott all meetings called for by the bank managements after normal office hours. The meeting also decided against working on Sundays and other holidays.
The schedule of Relay Zonal Strikes is as under:
02.12.2014 – Southern Zone (consisting States of Andhra Pradesh, Karnataka, Kerala, Tamil Nadu, Telengana and Union Territories of Lakshadweep and Puducherry.)
03.12.2014 – Northern Zone (consisting States of Chhattisgarh, Haryana, Himachal Pradesh, Jammu & Kashmir, Madhya Pradesh, New Delhi, Punjab, Uttar Pradesh, Uttaranchal, Rajasthan and Union Territory of Chandigarh)
04.12.2014 – Eastern Zone (consisting States of Bihar, Jharkhand, Odisha, Sikkim, West Bengal, North Eastern States and Union Territory of Andaman & Nicobar Islands)
05.12.2014 – Western Zone (consisting States of Goa, Gujarat, Maharashtra and Union Territories of Daman & Diu)
It is two years since we submitted our charter of demands. While 13 rounds of negotiations have taken place, there is no satisfactory progress in the talks because of the negative attitude of the IBA/Government. Everyone is aware that employees and officers in the banking sector are doing their best to serve the customers and implement various schemes of the Government despite innumerable hardships and difficulties. Yet, the genuine demand for adequate wage revision is being delayed and denied.
Even though we have shown our willingness to adopt a flexible approach in order to finalise the settlement expeditiously, the same is not being reciprocated by the IBA. Thus, once again, we have been pushed to the path of agitation and struggle.
We call upon all our unions and members to manifest their resentment and protest through effective implementation of the programmes.
Better and early wage revision – We demand – We deserve.

Meeting of Departmental Promotion Committee (DPCs) -Furnishing of certificates by the members of DPCs : RBE No. 19/2023