Minimum wages w.e.f. 01-04-2015 for one day paid to all Guards & Other Staff employed by DGR sponsored Security Agencies/ Companies/ Corporations

2. CONSEQUENT TO REVISION OF MINIMUM WAGES BY MINISTRY OF LABOUR AND EMPLOYMENT, GOVERNMENT OF INDIA, FOR EMPLOYMENT OF PERSONNEL OF THE CENTRAL SPHERE, FOR WATCH AND WARD DUTIES AND IBID OFFICE MEMORANDUM. THE UNDERMENTIONED
MINIMUM WAGES FOR ONE DAY ARE THE WAGES BELOW WHICH THE PAYMENT TO THE
GUARDS & OTHER STAFF EMPLOYED WILL NOT BE MADE BY DGR SPONSORED SECURITY
AGENCIES/ COMPANIES/ CORPORATIONS THROUGHOUT THE COUNTRY WITH EFFECT FROM 01
APRIL 2015

1. Wherever the state minimum wages are higher than the wages notified herein, the higher wages shall stand
protected and would be payable.
2. ESI The security guards shall be covered under the Employees State insurance Act 1948 as
amended from time to time based on the gazette notifications by respective State Governments covering the areas under the ESI Act . Those areas which are not covered in the notification shall be covered under the Workmen Compensation Act 1923,as applicable.

4. BONUS Bonus is mandatory as per Payment of Bonus Act 1965(as amended). The minimum bonus has been calculated on the minimum wage of Rs 3500. The upper limit of bonus is 20 per cent. Bonus is applicable for wages between 3500(Lower limit) to Rs 10ooO(Upper Limit).

5. ** Paid Rest Day. The security guards are entitled to a paid rest day in every period of seven days.(Refer Section 13 (b) of the Minimum Wages Act, 1948 and Rule 23 of the Wages (Central) Rules,1950). When a security guard is requisitioned by the Principal Employer to work for more than 48 hours in a week he is entitled to wages on overtime rates for the additional period at double the ordinary rates in addition to the wages for the rest day.

6. Additional Charges Additional charges will be levied in case of service being provided in remote/disturbed/hazardous areas as Field Allowance @ 25 percent on Basic Pay plus VDA will be entitled to ESM security guards when working in remote/disturbed area such as Northern Eastern States, J&K etc, or when working in areas hazardous to health such as Coal Fields, Mines and Pipelines.

7. The daily wages shall be the minimum wages below which the security agencies cannot bid. The security agencies shall acquaint themselves with the relevant statutory provisions and carry out the market survey before bidding/ quoting the rates of basic daily wage including the variable dearness allowance but the same will not be below the minimum wages as given above.

8. Wages are subject to amendments as and when promulgated from time to time.

10. Any welfare measures laid down by the Central / State Enactments shall be duly complied with by the security agencies and PSUs/ Principal employers. 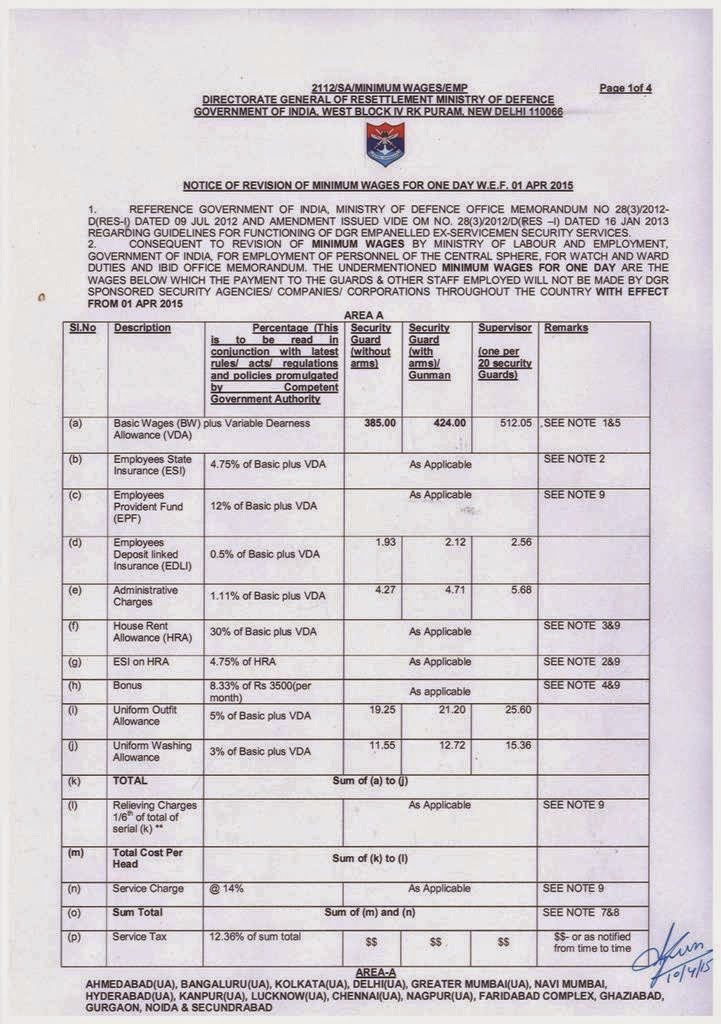 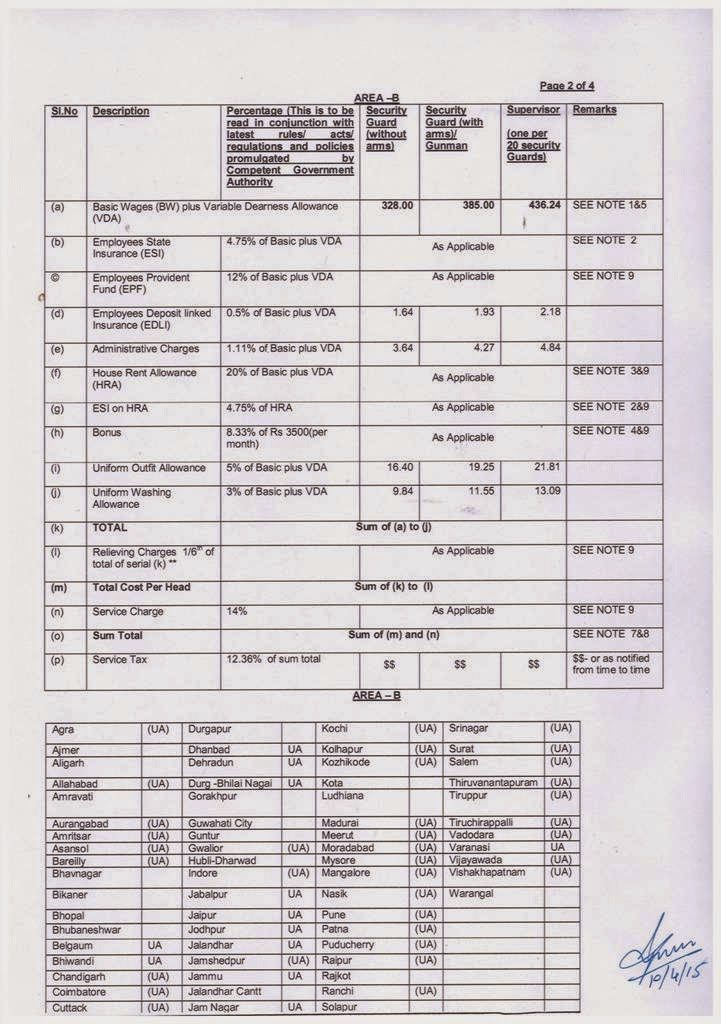 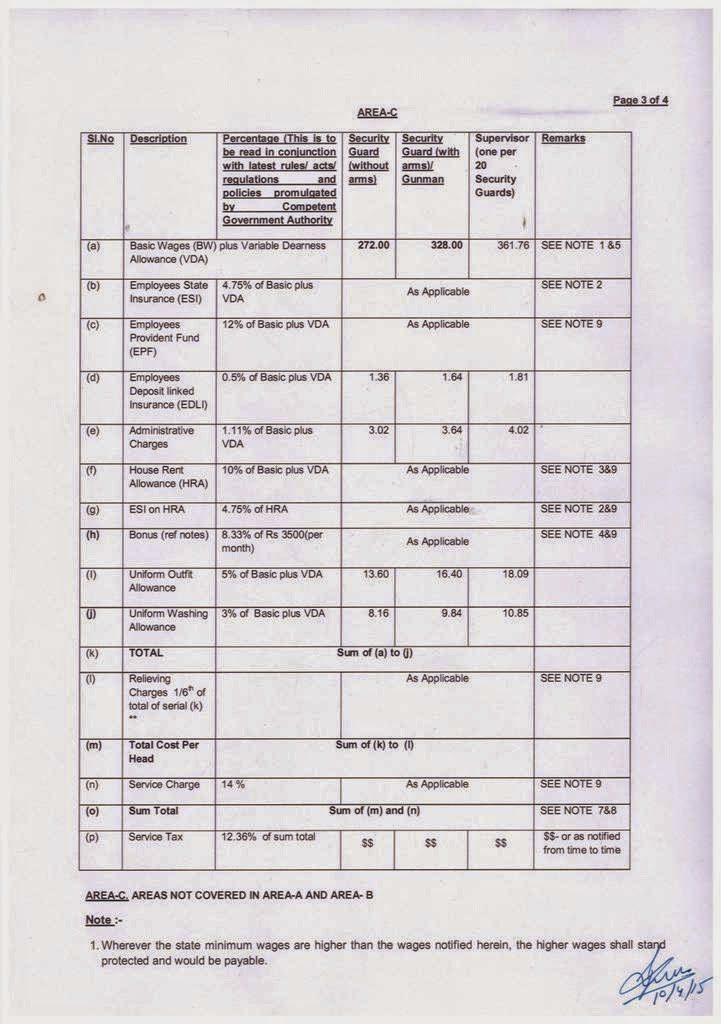 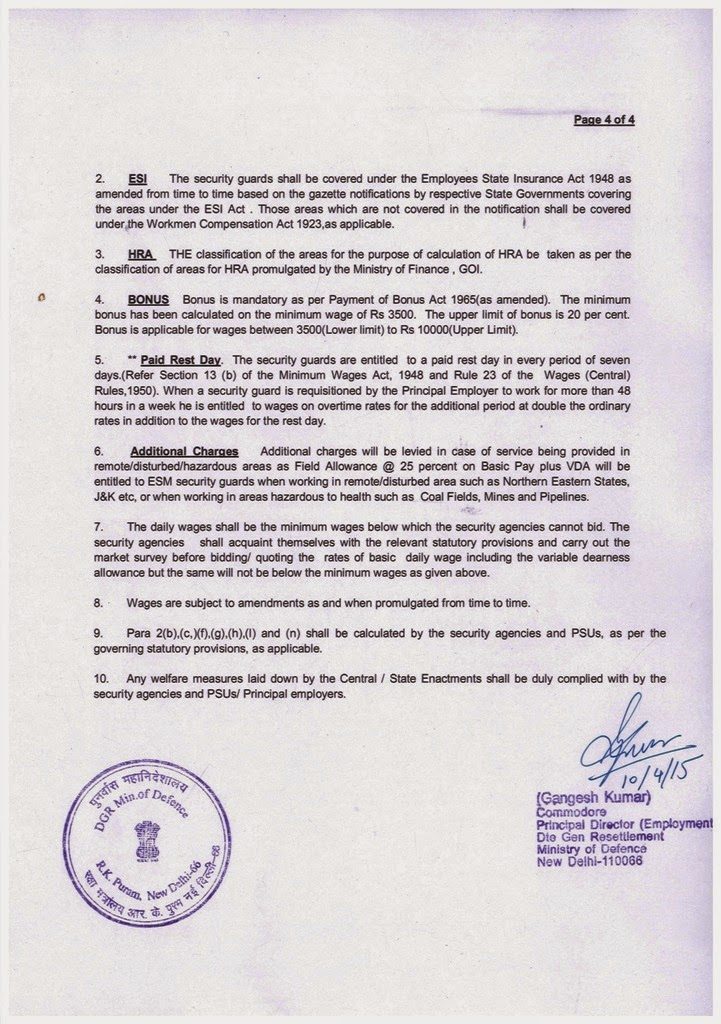 C K Narayanan: I wonder what for the name of NOMINEE is included in the DB account of family pensioner in SBI. Here the case in hand is nominee of a family pensioner informed CPPC of that branch for non crediting of three days family pension due to the pensioner who was live from 1st of December to 4th December. The information regarding the death of pensioner was informed to the bank . The CPPC did not credit the pension for the three days and when informed of the said deficiency the bank is asking for LEGAL HEIR CERTIFICATE from the nominee whose name is recorded in the bank. Here the moot question is information on non payment for three is is brought to the notice of SBI CPPC they are asking for LHC.           HERE IF BANK IS CORRECT FOR ASKING LHC FROM NOMINEE FOR CREDITING DUES THEN ITS HIGH TIME THAT RBI ANS OTHER BANKS SHOULD AMEND THE RULES AND MAKE INCLUSION OF LEGAL HEIR NAME INTESD OF NOMINEE IN ALL BANK ACCOUNTS. Further RBI AND SBI SHOULD GIVE CLARIFICATION ON THE ABOVE THROUGH THIS COLUMN SO THAT NO FURTHER NOMINEE SHOULD FACE SUCH HARASSMENT FROM BANK.

Kiran Kumari: Facility is available only for PH category in certain cases with the approval of HoD.

Ajay Suri: Can govt employee travel by own car for ltc purpose