2. As per the letter under reference ECHS beneficiaries are permitted to get costlier IOL/ Coronary Stents/ any other authorised Implant/ Device/Equipment after paying for the difference in cost over and above the laid down ceiling rates. A certificate to this effect duly signed by the ECHS beneficiary will be attached with the medical claim.
3. .This office is receiving complaints from ECHS beneficiaries that in many cases, where the patient was in the operation theatre, his relatives were asked by the empanelled hospitals to sign such certificate, who were not aware. of the rules. All ROs are hereby instructed to apprise the empanelled hospitals in their AOR to refrain from such underisable activities.
4. It has now been decided that all such certificate will be signed by the ECHS beneficiary i.e. the Ex-Serviceman only. However, if the ex-serviceman is unable to sign the form being unconsious incapaciated then his wife or children can sign the certificate with .the condition that they will not ask for the reimbursement of the extra cost over and above the ceiling rates. A format of the certificate is attached as appx with this letter. All empanelled hospitals will use this format only with effect from 01 sep 2015 and will be liable for deduction of the extra amount charged from the ECHS beneficiary or his next of kin if the policy is not followed.
5. All Regional Centres are advised to fwd a copy of this letter to all empanelled hospitals and take a feed back from them that the letter along withits appx has been received by them. 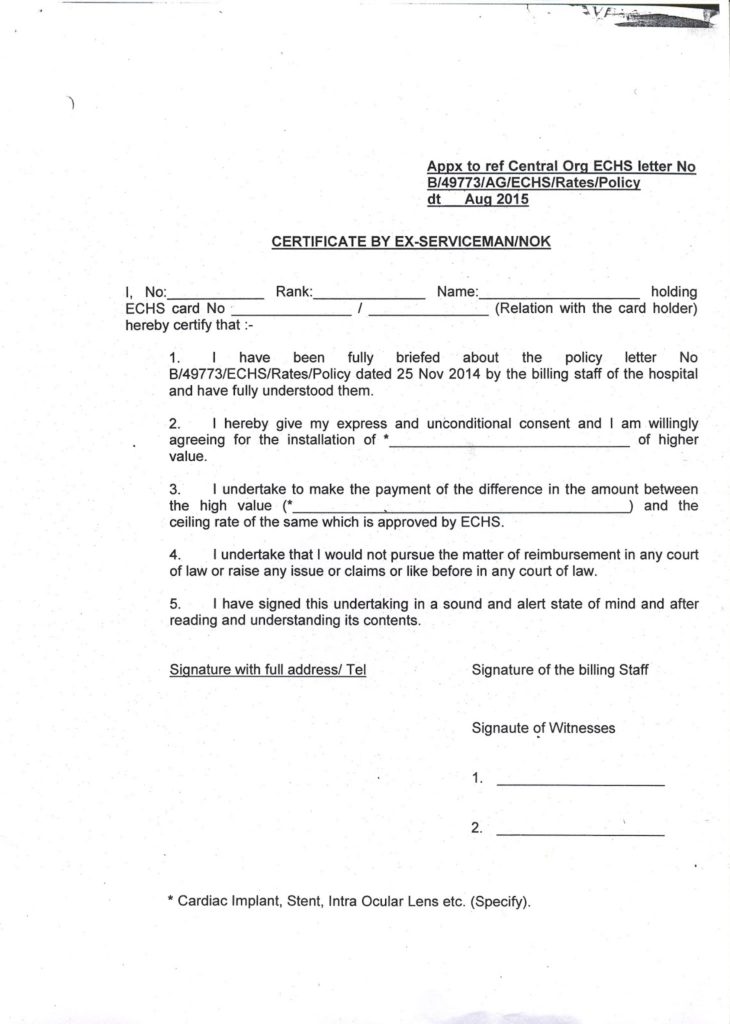