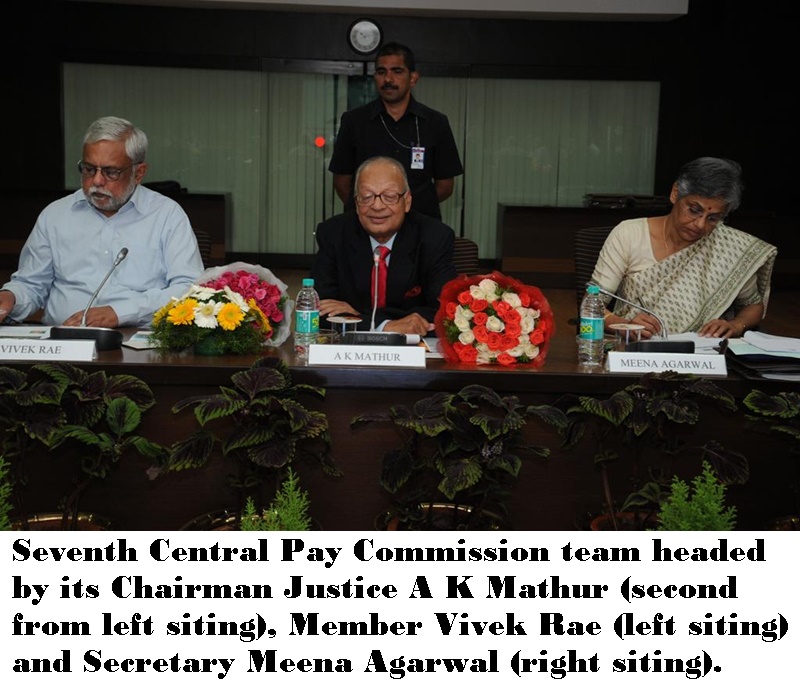 New Delhi: The Seventh Pay Commission recommendations are likely to be come into effect from April 1 as the country entered a new fiscal year.

The reports of Seventh Central Pay Commission will be implicated from April next year as Finance Minister Arun Jaitley said in the Parliament on February 27.
The Seventh Pay Commission plans to submit its recommendations on a new pay and pension structure for the country’s 48 lakh central government employees and 55 lakh pensioners’ up to December 31.
Justice A K Mathur, chairman of the 4-member commission, said they are aiming for the date so that the government employees can get salaries under the new pay scale from the upcoming fiscal year.
However, they were ready to submit its report by the end of September but government gave nod to submit its report till December 31.
“The commission would work to keep inflation in check, as a salary increase is invariably accompanied by a rise in the price level,” an official of the commission said, speaking on condition of anonymity.
The commission is exploring whether it would be possible to increase financial limitation of various facilities to the central government employees in place of existence allowances, he said.
For instance, the commission is considering whether it would be possible to increase education allowance facilities from school children to college boys/girls upto 25 years.
Presently the Education allowance is admissible for two children, for studying upto XII standard. The maximum ceiling is stipulated at Rs.18000/- since this allowance had been hiked by 50% because of the DA component in salary having been crossed 100% on 1.1.2014.
He also said they are also considering whether to recommend increasing Central Government Employees’ Group Insurance Scheme (CGEGIS) up to minimum sum assured amount to Rs 5 Lakh in the event of death. Now, the maximum sum assured in the event of death in this scheme is Rs.30 thousand.
The commission is also mulling to recommend more cities to cover Central government Health Scheme (CGHS) from existing 25 cities for better health facilities for central governments employees and pensioners.
Sources said the commission would recommend formation of a fund where a staff will deposit some money towards a flat after retirement at the start of his job; the government will also contribute towards it.
The Commission, which was set up by the UPA government in February 2014 to revise remuneration of central government employees, Defence personnel and pensioners, was required to submit its report by August-end.
The government on Wednesday extended by four months the term of the Seventh Pay Commission, The Commission will now have time until December 31 to submit its report.