Sub: Writing and Maintenance of APAR.

2. However, it is noticed that the guidelines/instructions are not being followed by Reporting, Reviewing and Accepting officers resulting in finalization of APARs in a flawed manner adversely affecting the promotional and other aspects of the concerned officers. Since it concerns the career development and advancement of our personnel, it is incumbent upon all the officers to bestow their personal care and attention in each and every report that comes under their consideration/responsibility so that the staff/officers reported upon do not feel disappointed and let down.
3. Accordingly it is enjoined upon all the concerned, that the guidelines/instructions issued on the subject may be strictly adhered to, in letter and spirit. A copy of guidelines and instructions is enclosed.
DCDA (AN)

xxi. The column provided for irregularity/ punctuality in attendance in the APAR may be filled as per assessment by reporting and reviewing officers and as per the existing provisions the Accepting Officer may exercise its discretion and award overall grading accordingly in terms of Para 215, OM Part-l and Hqus pofice No. AN/Xlll/13128(652)/Vol.Xl/Amend OM-l dated 10.01.2006.

xxiii. All the Govt. orders/instructions on preparation, maintenance and completion of APAR issued from time to time shall continue to be followed.

Guidelines regarding filling of APAR with numerical grading
The following guidelines shall be kept in mind while awarding numerical gradings:
i. The columns in the APAR should be filled with due care and attention and after devoting adequate time.
ii. Numerical grading are to be awarded by reporting and reviewing authorities for the quality of work output, personal attributes and functional competence of the officer reported upon. These should be on a scale of 1-10, where 1 refers to the lowest grade and 10 to the highest. The accepting authority will also give overall grade on a score of 1-10.
iii. The overall grade on a score of 1-10 will be based on 40% weightage on assessment of work output, and 30% each for assessment of personal attributes and functional competency. The overall grading will be based on addition of the mean value of each group of indicators in proportion to weightage assigned.
[i.e. Weightage Average/Overall grade 2 (40% of mean value of assessment of work output + 30% of mean value of assessment of personal attributes + 30% of mean value of assessment of functional competency)
iv. It is expected that any grading of 1 or 2 (against work output or attributes of overall grade) would be adequately justified in the pen-picture by way of specific failures and similarly, any grade of 9 or- 10 would be justified with respect to specific accomplishments. ln awarding a numerical grade, the reporting and reviewing authorities should rate the officer against a large population of his/her
peers that may be currently working under them.
v. APARs graded between 8 and 10 will be rated as ‘outstanding’ and will be given a score of ‘ 9 for the purpose of calculating average scores for empanelment/promotion.
vi. APARs graded between 6 and short-of 8 will be rated as ‘very good‘ and will be given a score of 7.
vii. APARs graded between 4 and short of 6 will be rated as ‘good’ and given a score of 5.
viii. APARs graded below 4 will be given a score of zero.
Authority: oopr OM No. 2101111/2010-Estt.A (Pt-II) dated 23.07.2009
No- AN/XlIl/13128/APAR/2010-11   Dated 24.05.2014 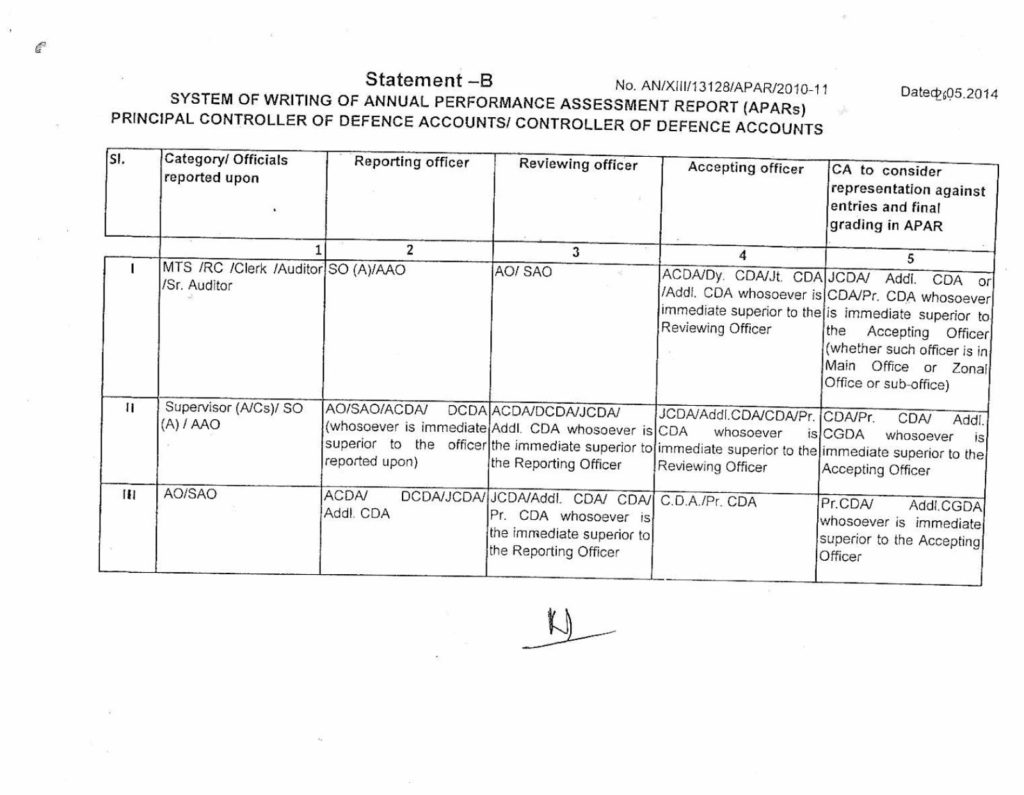